From the newspaper cutting dated 1973 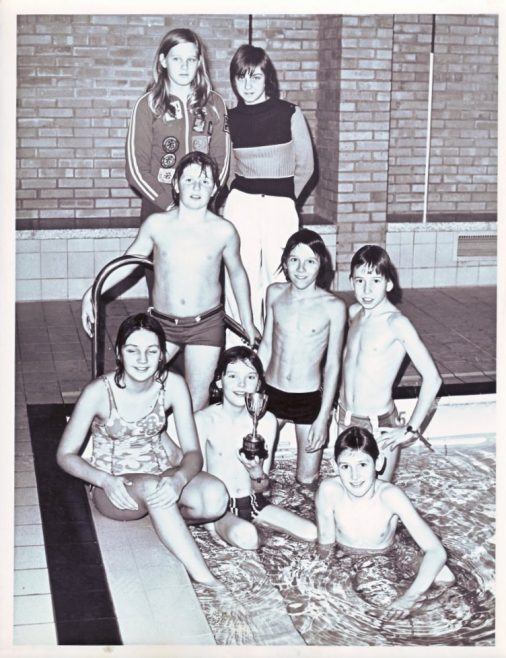 This picture may be the 1973 win or perhaps they came back and won again in 1974. Back Sharon Dow, ?: Middle Victor Rice, Barry Storey and Gary Pearce: Front Michael Colville, Julian Kite

Junior members of Canvey Life Saving Club won the Pat Gray Trophy at Runnymede Swimming Pool, Benfleet. This is the only junior trophy given by the Essex branch of the Royal Life Saving Society. The upper age limit for this competition is thirteen, but all Canvey’s team, with the exception of the captain, Colin Brooks, are eleven. The rest of the team were, Barry Storey, Garry Pearce, Helen Nunn and Sharon Dow, with reserves Victor Rice and Michael Colville.

They put on a well-executed and disciplined demonstration of life-saving which included expired air resuscitation, various methods of towing, releases, restrains, swimming in normal clothes, undressing in deep water and floating with the aid of an inflated garment.

The team attained three hundred and sixteen points out of a possible maximum of four hundred and sixty. The standard of life-saving shown by the young competitors was worthy of victory. The trophy is held for a year and it is hoped that with the experience of competing for the first time behind them these youngsters will go on to retain it in next year’s competition.

Can anyone confirm this picture is 1973? It is dated 1973 on the back but with a query and from reading the text of the newspaper cutting it may be 1974. 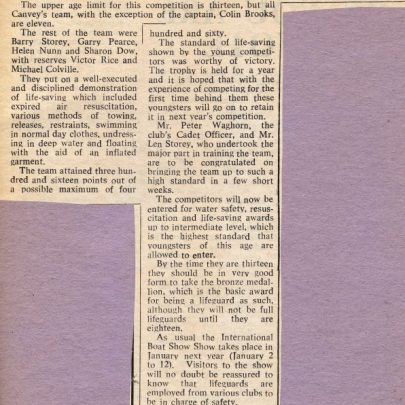