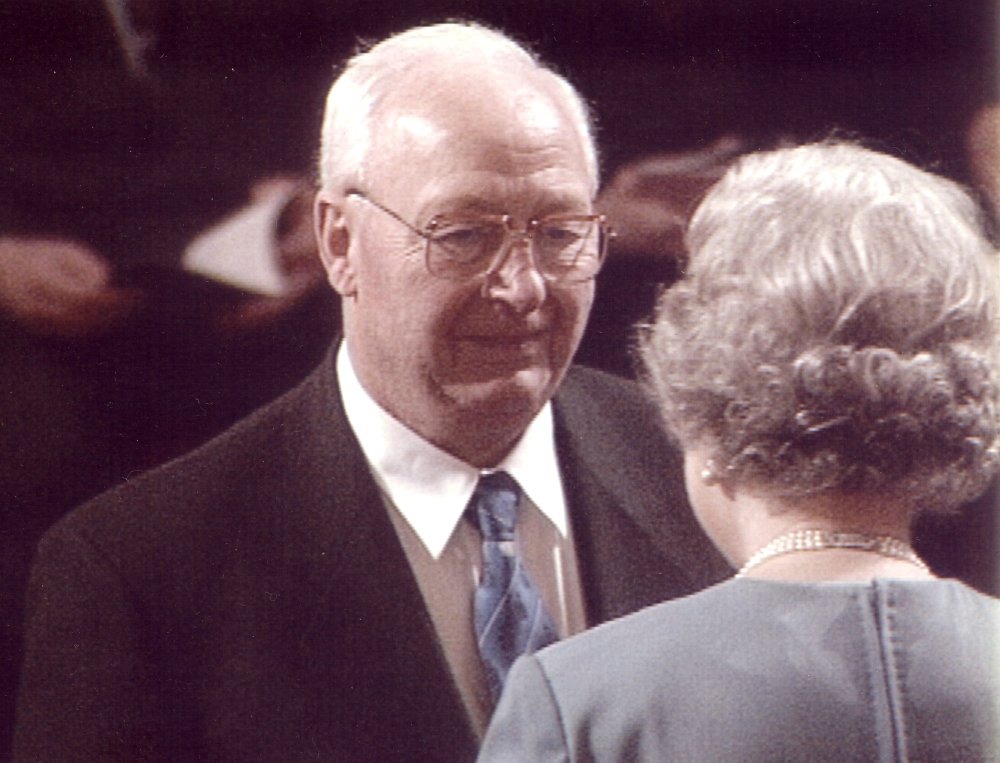 Charlie recieves his O.B.E from the Queen 1999

With all the information and photos supplied to CCA from ‘Copper’ Hastings Scrap Book I thought it would be a good idea to go and have a chat with Charlie Carey and his wife, Lily, founders of the Canvey Lifeguards.

Charlie Carey was born in 1927 in what was then the Punjab Province of India where his father was serving in the the British Army. Charlie’s family moved to Canvey in 1935. He saw active service towards the end of WW2 in the Far East and was present at the release of Prisoners of War from the Changi P.O.W camp in Singapore. After de-mob he resumed his job as a baker and confectioner working for several local bakeries, then he changed his career and went to the City Trading firm of Czarnikow where he literally went from the door as commissionaire/messenger to manager of the Rubber Dept. As well as his Lifeguard activities, over 20 years he served as cook on voyages of the Sail Training Association schooner ”The Sir Winston Churchill”.

I asked Charlie how the idea of a lifesaving club first came about, he said “Well it was well over 50 years ago, one summer in the mid 50’s, a man and his young son were drowned while bathing in what was known as the ‘Eel Pool’, halfway between Chapman Light House and the top of May Avenue. We were down the beach at the time and were shaken by this so we decided to do something about it. I was a member of the ‘Serpentine Swimming Club’ and started taking lifesaving instructions lessons up there. I went through all the procedure, got my instructors certificate and Bronze Medal so I was in a position to form a lifesaving club. We formed a group of members but the nearest facilities for training were at Hornchurch Baths so we had to go up there for a time. This was in 1958. Then we were able to hire the baths at St Bernard’s High School in Westcliff and we managed to buy an old Dormobile and go over there for training every Sunday. Meanwhile, we’d got our first H.Q at the seafront, which was a shed, at the bottom of the landside of the seawall, halfway between the Old St John’s Ambulance Hut and the Concord Café.  Also about this time I joined the Coastguards so we were able to co-ordinate our activities with them, signing on and off with them when on duty and later on being available for dawn to dusk callout if required. The proper title was, at the beginning ‘The Canvey Island Lifesaving Club’ and I was designated as secretary. After about four or five years we were able to acquire half of the Concord Café on Shell beach for a peppercorn rent from the Canvey Council and that was our main HQ from the early sixties onwards.”

In the sixties there could not have been enough hours in the day for Charlie, not only was he working in London and swimming in his dinner hour, he’d started giving evening swimming lessons at Furtherwick Park School Swimming Pool as well as life saving sessions there too. Later in the 70’s when Waterside Swimming Pool opened these activities were transferred there.

In the same period of time Charlie was asked by ‘The Royal Lifesaving Society’ to make a major contribution in drawing up a manual of rules and regulations for the formation of local lifesaving clubs drawing from his experience in the forming of the Canvey Island Lifesaving Club (which post war was something of a pilot project). The publication was called ‘On Guard’ and has been used as the template for all RLSS handbooks nationally ever since. As a mark of appreciation the society gave him an original copy which he proudly showed me. The Canvey Island Lifesaving Club became ‘The Canvey Island Lifeguards Corp’ c1966 and in the following three decades often had a waiting list of over a hundred applicants for new recruits. The headquarters at Concord Café was improved and the lookout post added and the old ‘De Gauzing’ building at Thorney Bay was rented from the council for use as extra equipment storage, Committee Meetings and Cadet Training.

Charlie continued: “We had several boats, the first boat we had was given to us by Prouts and it was called ‘ELP’ E.L.P. That was rather jolly! Then as we increased our funds we had our own boat built which was a flat bottomed Dory type with a 10hp motor. Then we got a fibreglass boat with a 20hp Mercury. That was followed by the R.I.B inshore rescue boat, the last one we had was a R.I.B. with a 50hp Motor. We had radio contact with the boats and handheld walkie-talkies along the seawall from Concord beach HQ and naturally with the Coastguard. We also benefited from our association with the coastguard getting our training in boat handling skills and radio.” During his years as a member of the RLSS Charlie has received many awards from the society for his achievements and I found this little anecdote very interesting “In 1971 I had to go up to Commonwealth House to receive my Distinction Award. It was presented by the RLSS Commonwealth President Lord Louis Mountbatten. When he saw me he said ‘I know you’ I said ‘You ought to sir, we worked together nearly two years’ I was his radio op in Malaya!”

In 1988 Charlie Carey was made an Honorary Life Member of the RLSS and in 1999 he took a trip to Buckingham Palace to receive the OBE for his Public Service. 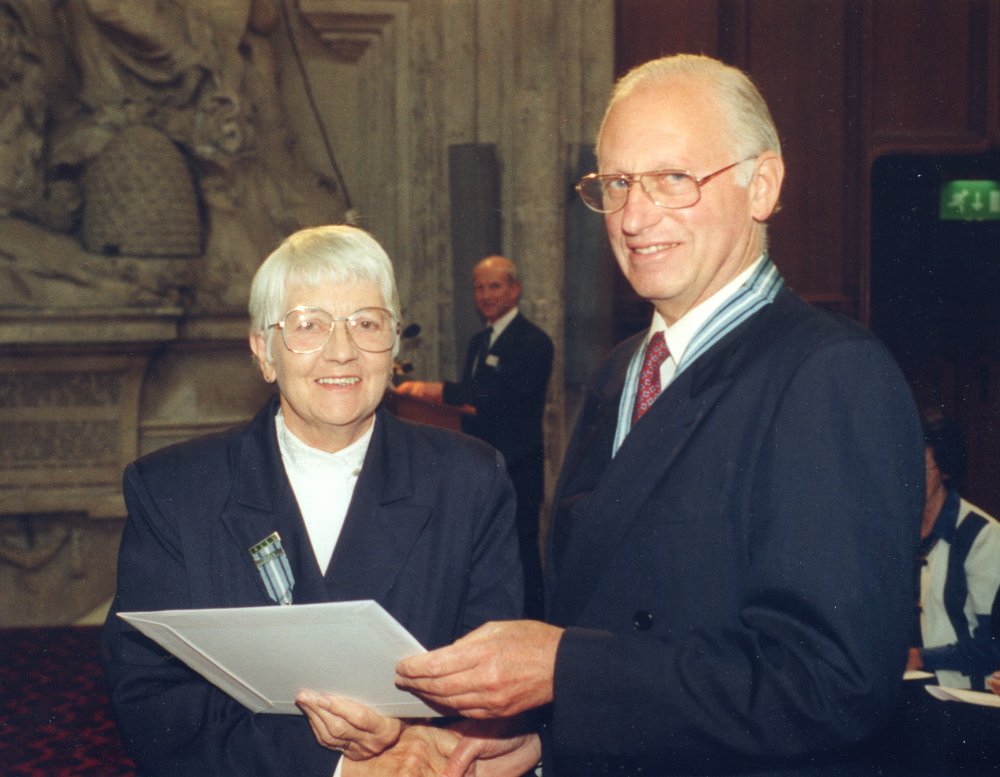 Throughout the years Lily has been his stalwart support in his lifesaving activities, right from the times of slapping on the lard for his New Years Day Serpentine swims. (They have recently celebrated their 60th Wedding Anniversary) She also has made several rescues at the seafront and in 1998 in recognition of valuable services rendered she was made an Honorary Life Member of the RLSS.

Unfortunately by the beginning of this decade recruitment numbers began to dwindle and it became difficult to find younger people to take on the responsibility of administration of the club. By 2006 only a few of the original stalwarts were left to patrol the beach and it was decided to call it a day. However, even in its demise the Canvey Island Lifeguard Corp was able to benefit others:The R.I.B was sold cheaply to the Island Yacht Club for use as a rescue boat and all the resuscitation equipment was also donated to the Club Cadets for training purposes. Over the years the club’s funds had been wisely invested and the substantial five figure sum accrued was split between seven charities.

Sadly, today, Canvey’s beaches are no longer as safe as they were in the ‘Nye on 50 years’ under the watchful eye of the ‘Canvey Lifeguard Corps’. 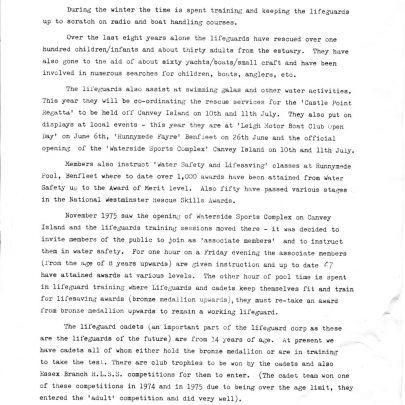 Report from 1976 showing the many activities of Canvey Lifeguard Corps in it's hey-day. Click to see an enlargement
C.Carey 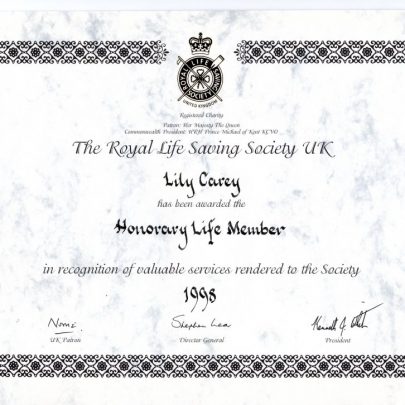