History of the Canvey Wildfowlers Club 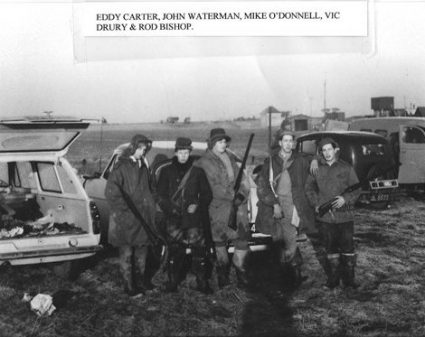 Soon after formation, the Club became affiliated to the Wildfowling Association of Great Britain and Ireland – W.A.G.B.I – now called the British Association of Shooting & Conservation B.A.S.C.

The membership soon grew and the Club set about securing some shooting rights, the first of which was Newlands Tip & Marsh, from the Canvey Island Urban District Council. The club also obtained rights over Canvey Point from The Island Yacht Club.

At this time these areas were being heavily shot over by so called marsh cowboys shooting everything in sight. Most of the people involved were of Mediterranean origin and the club set about stopping this illegal shooting. Club members operated a rota every weekend during the shooting season, manning the seawall from dawn to dusk turning them away. On some occasions we had to involve the police due to threats. On one occasion I can recall turning off 25 people, made up of shooters with their wives and children. This constant policing went on for a couple of years until we finally stamped it out.  With the club now in control, bird numbers soon returned to these saltings. 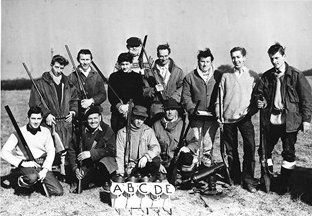 The Canvey and Benfleet marshes were declared an S.S.S.I area– Site of Special Scientific Interest – and as the Club were using the marshes for wildfowling, negotiations were held with what is now named Natural England and other interested parties – Terry Blamey playing a big part in this. The outcome was that a management plan with Canvey Wildfowlers was put in place, covering an area of salt marsh from Benfleet Yacht Club up to Canvey Point. The management plan set up over 25 years ago is still in existence today, with the Club sending an annual report to Natural England.

During the early days of the Club, we had regular clay pigeon shoots off Northwick Road (now Canvey Wick), and later at Stanford-Le-Hope. The Club disbanded its clay section in the 1980’s due to planning problems at the farm we were using. Since then the club has been privileged to be able to use the clay shoot owned by Club member Ron Masters, who was also our treasurer for many years.

The Club is part of the Essex Joint Council of Wildfowling Clubs, who have an annual clay pigeon shoot, which is run by one of the member Clubs. This annual event was started about 40 odd years ago and a trophy shield is presented to the winning Club team. The first 2 years Canvey won the trophy, then our luck ran out. The following year, the Club member running the clay section at the time, did not want to be beaten again and brought in two ringers in the shape of two of the England clay team. Unfortunately at the end of the day, what a surprise! They were recognised and we were disqualified, never to win again. 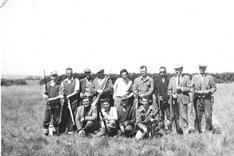 One year, as part of the E.J.C., the Club held the annual gun dog test at our Fobbing shoot, which turned out to be a successful day. The highlight, however, was one Club member’s dog, Goldie, which, instead of fetching the dummy, decided to rummage down a judge’s bag and eat his lunch!

In more recent years the Club has enjoyed shooting over land at  Ouzdam Farm and Iron Latch – both at Coryton, Fobbing, Althorne, Rettendon, Pitsea, Bowers Gifford, Hanningfield, Downham, Pitsea Tip& Bowers Marshes and Canvey Marshes. To date, we still have rights over approximately 1500 acres of land. Unfortunately, we no longer have Coryton or Althorne, and from 1st February’09 , we lost Pitsea and Bowers Marshes. The Clubs association with the Pitsea Tip & Bowers Marshes site started about 40 years ago when it was owned by the Land Reclamation Co., then Redland  Pearl . During this period a tanker driver died on site whilst discharging a load of chemicals. Basildon Council then tried to close the site down on safety grounds and this resulted in a public enquiry being held. The company asked if the Club could assist at the enquiry answering questions on wildlife and habitat found on site to prove the site in general was not hazardous. We did, and a small team of members spent a number of days at the enquiry and the company won the day to continue operating. In gratitude for the help we gave, the Club was issued with an open lease to shoot, which continued with the next two owners of the site – Cleanaways then Violia – until 2010, when the R.S.P.B took over the site. Whilst on the site the Club had a hut for equipment and a breeding/release pen which covered approximately ½ acre, plus nest boxes on a series of ponds.

Over the years the Club has carried out a considerable amount of conservation work on our shoots, clearing choked reed beds, creating scrapes, planting trees and hedging, putting up owl boxes etc.  The Club also adopted a ban on hare shooting on it’s shoots as numbers in this area were dwindling. Unfortunately we still get a certain section of society with their Long Dogs poaching hares. Although this is illegal we have not had any help from the police in the past, stopping the perpetrators. Recently however following meetings with the local police at Corringham, with their help, we hope to eradicate the problem.

For a number of years the Club has had a stand at the Castle Point Show, promoting the club and B.A.S.C. On the stand, apart from promotional literature we have had photographic & object I.D. compositions for both adults and children, plus ferrets, which prove very popular. The last couple of years we have had game menus for the public to take away and these have proved to be very popular.

The Club continues to prosper attracting new members, but the total membership including five juniors, keeps at around 50, due to some moving away and unfortunately bereavements. 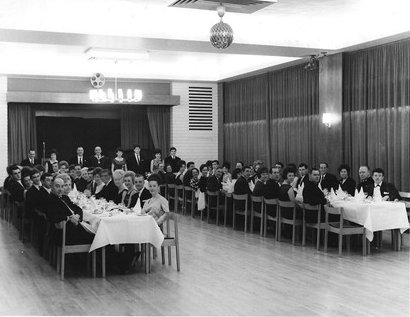 Allowing female members had been against Club rules, but we decided to allow the fairer sex to join. The first was Jane Hobbs, who did shoot, but we think was mainly sponsored by her husband Pat, to transport him and his 10 bore to his favourite spot, as he was partially disabled! We all miss Pat, sadly departed this life.

Our next female member, used to shooting on land, decided to venture onto the salt marsh. Unfortunately, upon her return, with the tide rising up the last gully, she lost her balance and took an unexpected muddy, cold swim!! The temperature of the water on a cold January day took her breath away but she was still able to manage a laugh. She is not alone, as many members past and present have also taken the plunge. 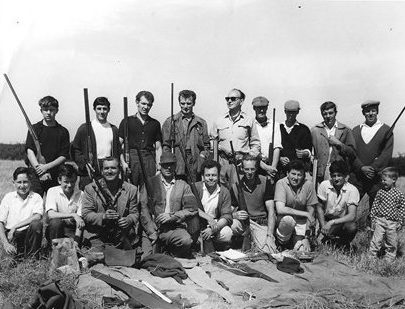 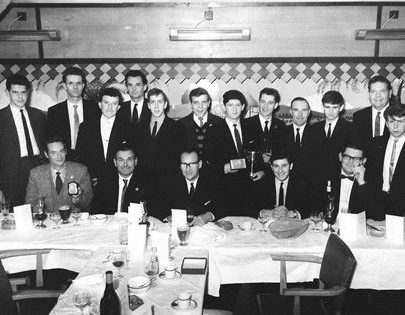 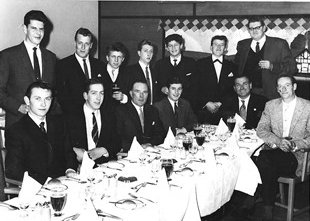 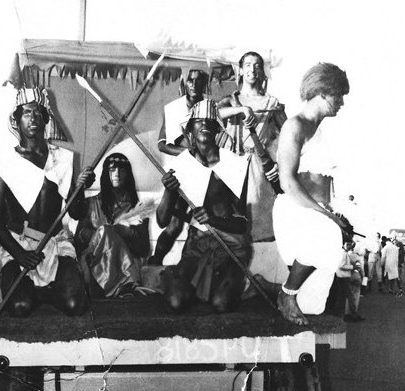 Members who entered a float in the Canvey Carnival approx.1963
Rodney Bishop 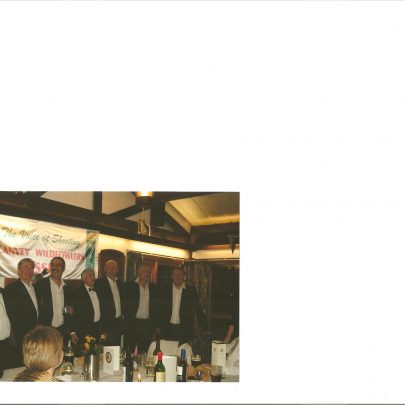 Committee members at the 50th Anniversary dinner in 2009