Modern aerial view of the station

It is genuinely unique.  Canvey has the only National Coastwatch station in the UK that sits over the sea rather than on dry land.    Indeed a watch keeper assures us that in heavy weather their hut at the end of a jetty in Holehaven Creek develops sufficient movement to provoke a degree of empathy with those riding out the storms at sea.

Actually, the station, which is essentially a wooden hut at the end of the jetty, belongs to the Port of London Authority and was a Harbour Master’s station until 1999 but before going on with the story of its change of status it is worth quickly outlining the development of Coastwatch to those not ‘in the know’.

The National Coastwatch Institution began life in Cornwall during 1994 as a direct result of a tragedy that took place close to an abandoned Coastguard station which had gone the way of most small stations, closed due to Government cutbacks. The death of two Cornish fishermen prompted locals to restore a visual watch on the coast and the NCI was born.  Today the NCI represents the eyes and ears along the coast, keeping a visual watch, monitoring radio channels, using radar and providing watch in poor visibility.  The role is one of observation and monitoring, alerting the Coastguard when issues arise and working with the R.N.L.I., Customs, Police and Border Control. 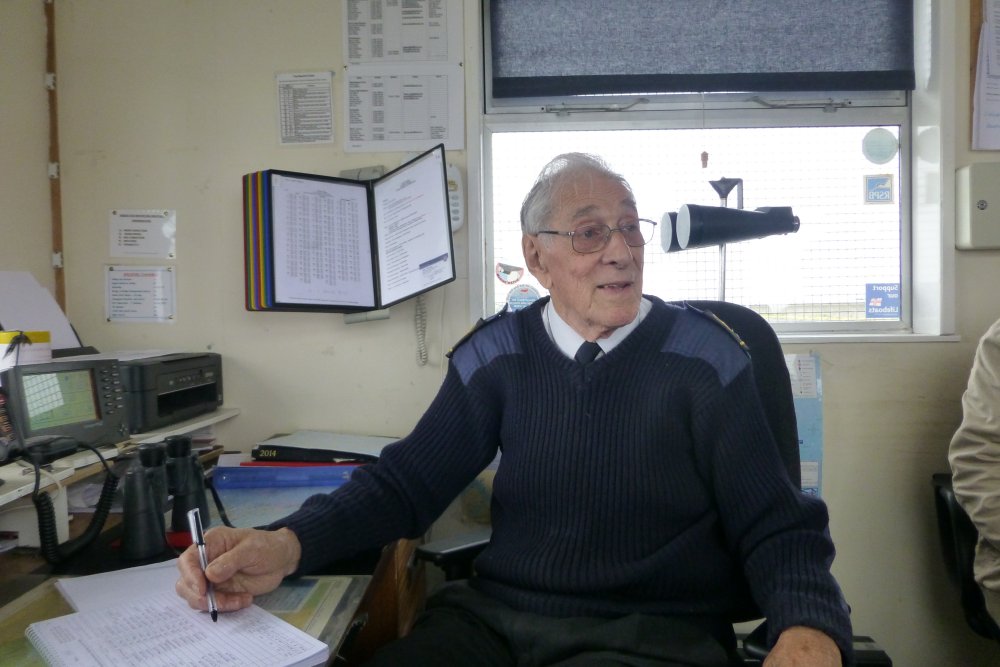 One of the volunteers

Back to Canvey, and in 1999 an article in a local newspaper alerted the NCI that the Port of London Authority was giving up occupation of the station in Holehaven Creek.  The NCI put a notice in the press that a meeting was to be held in the Lobster Smack for anyone interested in becoming a volunteer watch keeper. Twelve people came forward as recruits; a few are still active keepers fifteen years later.

Equipment was minimal to begin with, a pair of donated binoculars, a note book, pens and pencils, basic navigation equipment and an old marine radio.  They also had a bank account with nothing in it; all stations have to be self funding.   A lean start perhaps but on the positive side the PLA left the station furnished with chairs, desk and galley facilities.  A low peppercorn rent was agreed with the PLA and a zero council tax band was agreed by the council.  The hut itself wasn’t that old as it had been built in the ‘eighties to replace one that had been there since at least the World War ll but had succumbed to a fire. 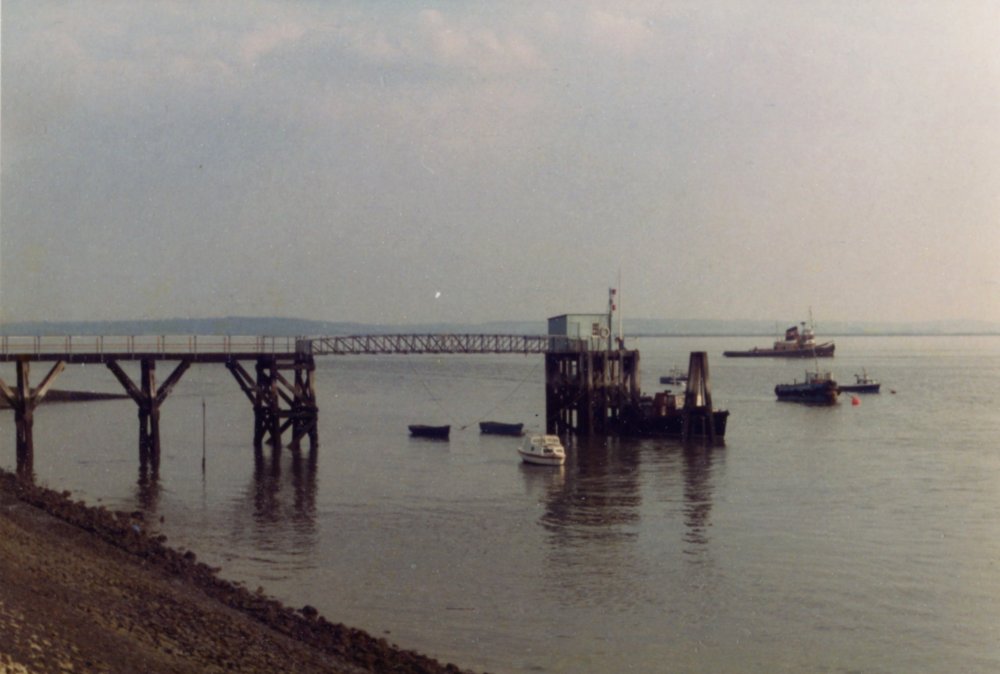 The old station before it was burnt down

By November 1999 the station was open, but only at weekends.  Two years later it was open every day of the week and now, with around 30 volunteers, Canvey is the only station of the four along The Thames that is working every day thanks to the dedication of the team and lots of local financial support. The ability to attract funds from local businesses and organisations has enabled the station to radically improve its equipment list.  Now they have several pairs on binoculars, a large telescope, a compass, two radios to pick up transmissions they have to monitor and use to contact the Coastguard, an automatic identification system (AIS) receiver, a second hand laptop, printer, charts and navigation instruments.  The station achieved Declared Facility Status in 2012, which means it is now fully included in the Search and Rescue operation.

The public can’t wander in and have a look but take it from the Archive, it is a busy little place. 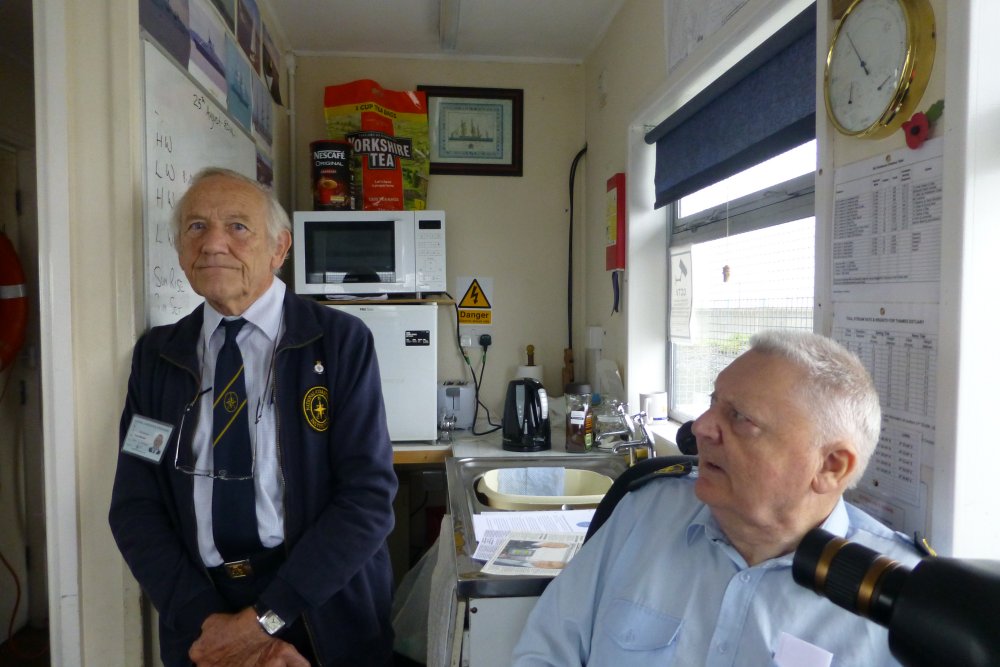 Paul Roberts and another volunteer

Meantime, after a period of eight years, the PLA has moved back into Holehaven Creek but the Harbour Master has to make do with a hut on the landward side of the sea wall with a view of the fields.  But his boat is moored a few yards out from the Coastwatch station and, naturally enough, relationships and good.

It’s fair to say that the ‘big boys’ using the Thames shipping lanes and the North Sea can look after themselves as far as Holehaven is concerned.  High technology and sophisticated systems have vastly improved safety at sea but there is no substitute for a watchful pair of eyes.  A computer cannot spot a distress flare, an overturned boat, or a yachtsman with engine failure.

The station is constantly monitoring and watching and there is a steady flow of incidents throughout the year from minor issues to potentially life threatening ones.  For example a couple had apparently securely moored a private yacht off Canvey and yet the keeper spotted that it was gradually going out with the tide and drifting out towards ‘heavy traffic’.  The Coastguard was alerted, the yacht’s occupants awakened and a potential tragedy averted. 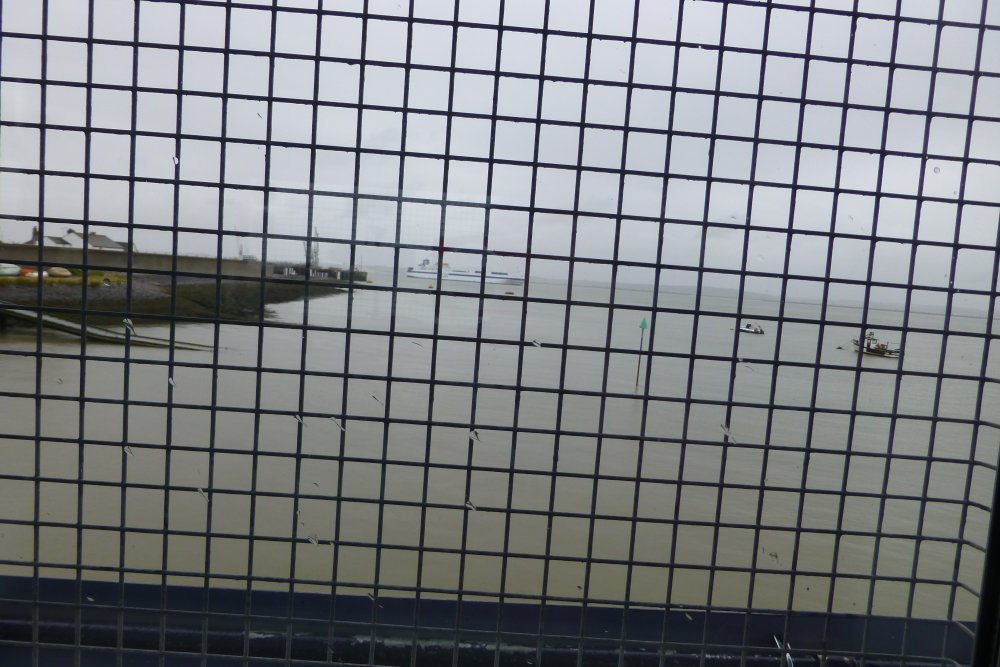 View out towards the Thames on a very wet day

Some events are almost comical if they weren’t so dangerous.  The keepers tell of some of the “idiots” they have to deal with.  For example, a couple of men purchased a motorboat in a pub and decided to set off from Watt Tyler the very next morning.  It was a flat bottomed vessel and the tide was falling.  It was probably only a surprise to these two characters that it got stuck on the mud.  They had nowhere to go until the next tide and their kit comprised T shirts and shorts.  Alerted by Holehaven station, the lifeboat (Southend has a hovercraft) soon brought them to safety and a somewhat deflated couple of macho men were delivered to the jetty bemoaning the tongue lashing they had received from the lifeboat crew.

It can, of course, get a little more serious.  The station is normally manned for eight hours or so each day.  During the 2012 Olympics they had their eyes on the river for a full 12 hours each day.  At one point they spotted an unknown vessel unloading boxes onto the Island and before very long the boat’s crew found themselves in a deep conversation with the special branch.   Later two Dutch vessels coming up river failed to reply to radio calls, the keepers contacted the authorities and very soon the Special Boat Service was on hand bristling with guns. 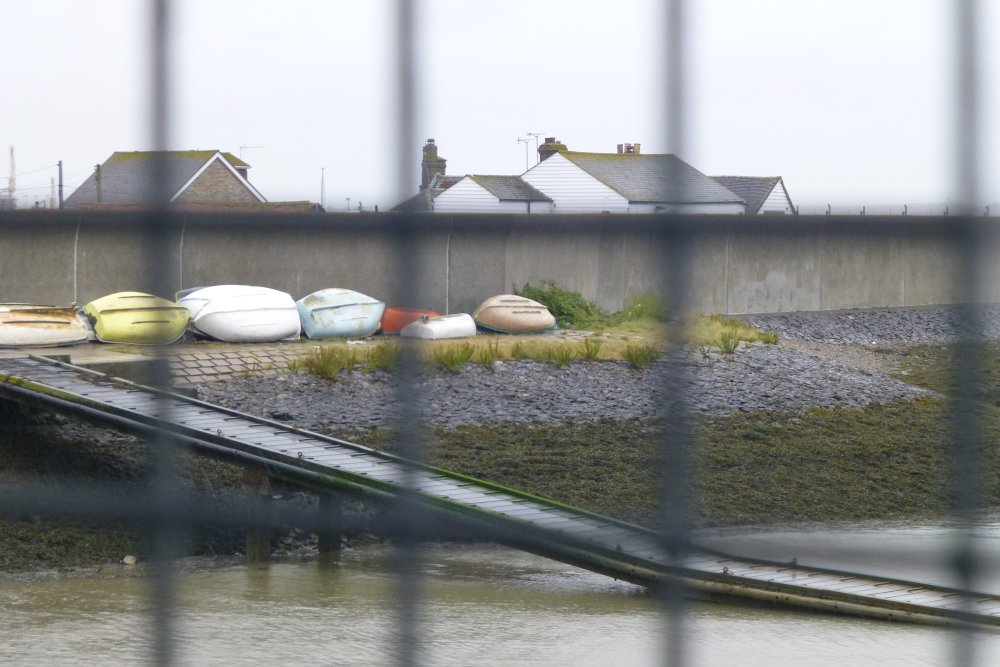 Looking towards the Lobby

However the daily fare is looking out for those individuals in small craft or undertaking vulnerable activities such as canoeing, boardsailing, diving, jet-skiing etc.  The keepers also have an eye on those on land close to the water who might get into difficulty, although, in fairness, that part of the coast isn’t exactly teeming with the local populace.  But things could change.

Several years ago the Council suggested that the station would be in a better surveillance position by relocating to the sea front and they would include a new station in their Regeneration Plan where it would be of greater benefit to the local community and all users of the river. Funding didn’t materialise but the volunteers are still keen to relocate.  They have taken a lease on the old St Johns Ambulance station on Eastern Esplanade.  They hope to build a three storey structure on its site which will give them a far greater view of the estuary.  At present Holehaven gives them a 60 degree view of the river; an Eastern Esplanade station will triple that to 180 degrees and bring miles of additional coastline into prospect. 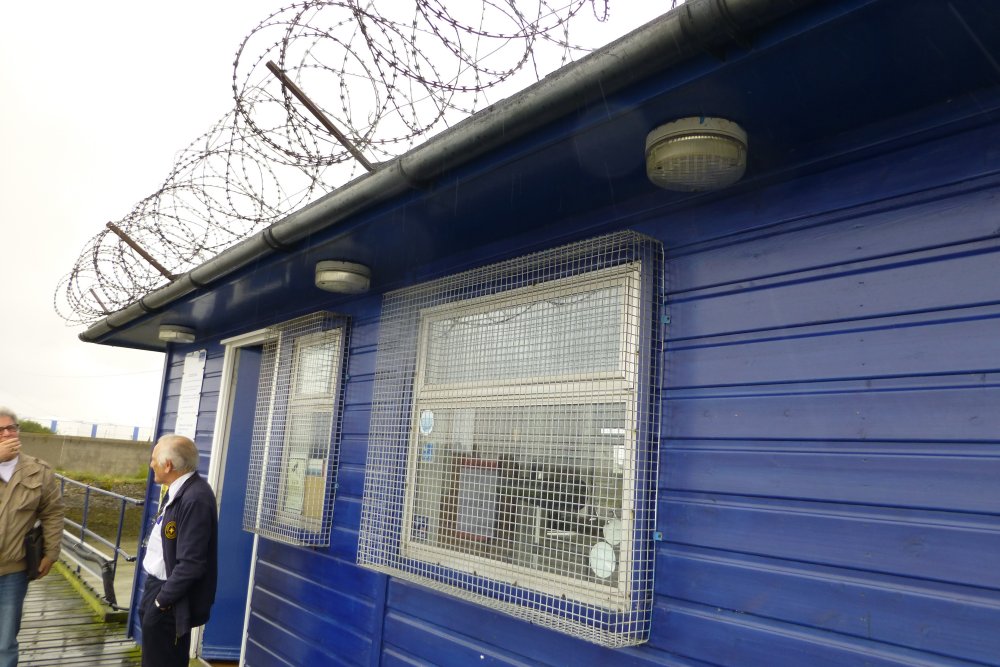 Outside the station, very wet

It is unlikely the hut at the end of the jetty will be abandoned to its fate however.  The PLA hasn’t made any decisions but quite possibly the Harbour Master might prefer a view of the river rather than the fields if the chance arose. 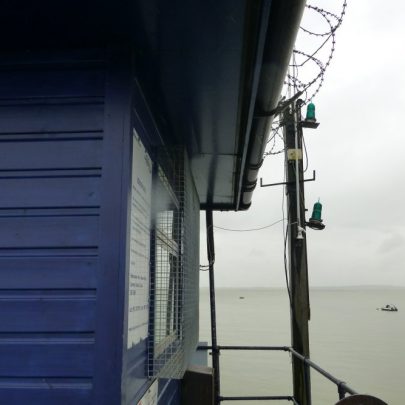 Towards the Thames, not a clear day 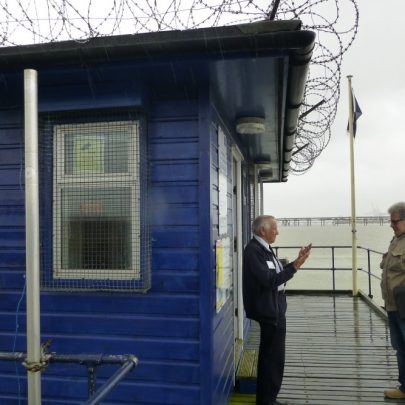 You can see how wet it was
Janet Penn 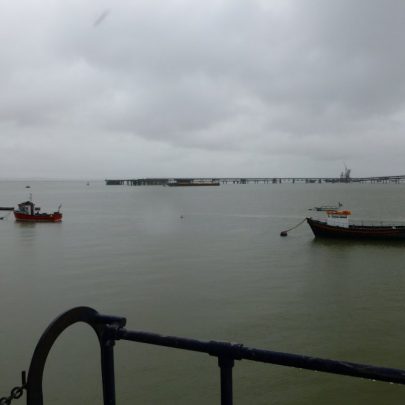 Across to the jetty
Janet Penn 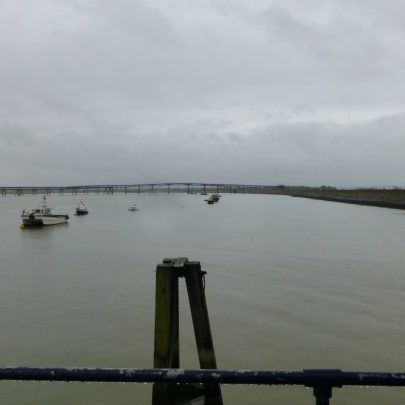 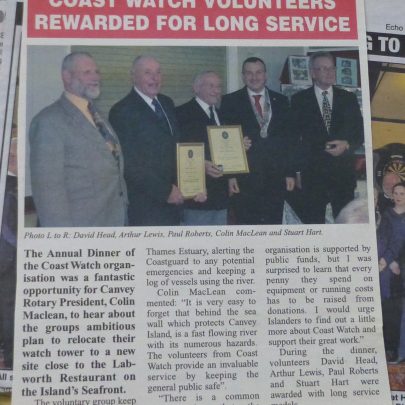 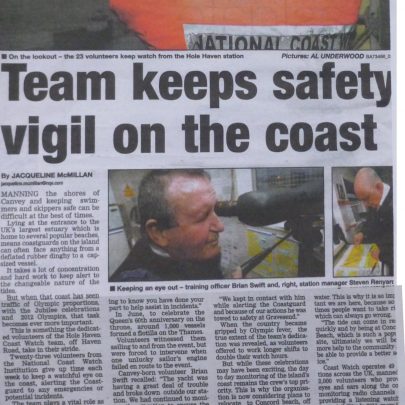 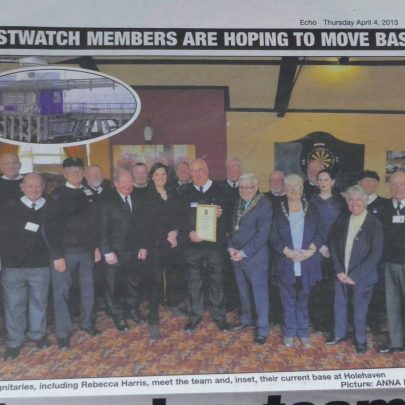 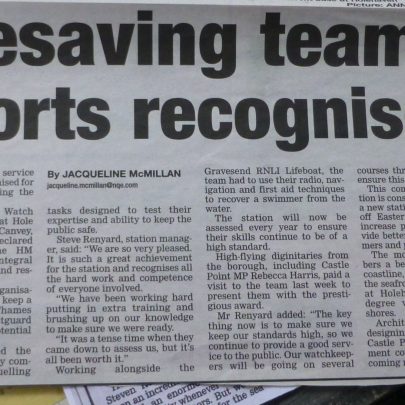