My years as a WRVS Volunteer

I first joined the WRVS back in 1987 as a helper at the newly opened Luncheon club in Poplar Road. The luncheon club was very busy in those days, opening three days a week and up to 40 elderly and disabled people attended. The meals on wheels was also heated and distributed from the premises, so it was always a hive of activity. 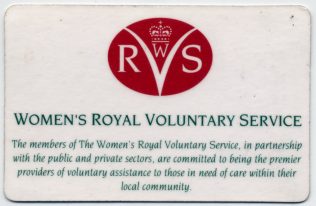 With the elderly arriving on foot or by assisted transport and with the WRVS helpers both from the club and the meals on wheels there was always a lot of people buzzing about.

When my children were on holiday from school they used to come with me and help lay the tables and escort the disabled into the centre. My son used to take his latest cars to show the men. They both loved to talk to the old people. Most children have at least one or two sets of grandparents mine had dozens. 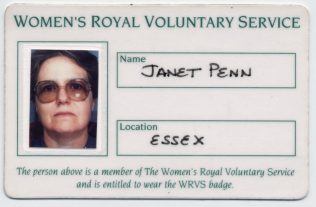 I worked at the centre for seven years during some very difficult times for my family. Joan Lock and my colleagues were very supportive to both myself and my children. As we had no immediate family it was very nice to know there was always someone to talk to. I was the youngest helper at the time so I had all these people with many more years experience than me, ready and willing to help me.

The luncheon club was open three times a week and at first I helped out just one day a week on a Thursday but as time went on and the other days became full Joan decided to try out another day.  So we started the Tuesday club. Our driver,who at that time was Bob Reeves, would collect the less able club members in the council vehicle usually taking two runs to get them all to the centre. When Bob retired another Bob, Bob Finch took over. Bob Finch, now long retired is a helper at the centre. 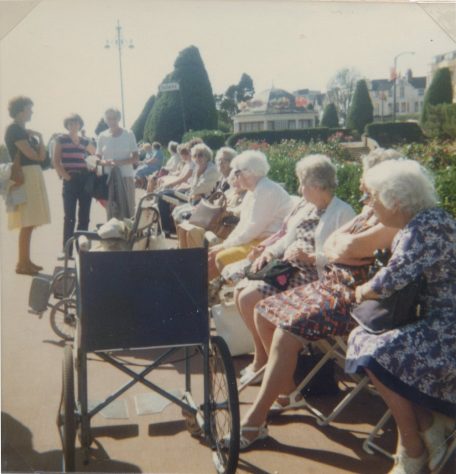 Joan arranged outings for the club members to Maldon, Clacton, a mystery tour and a garden centre at Braintree. I used to go to help on the shorter trips and if my children were on holidays from school they would come too.  A cheap day out for us to Clacton and the only outing we had. 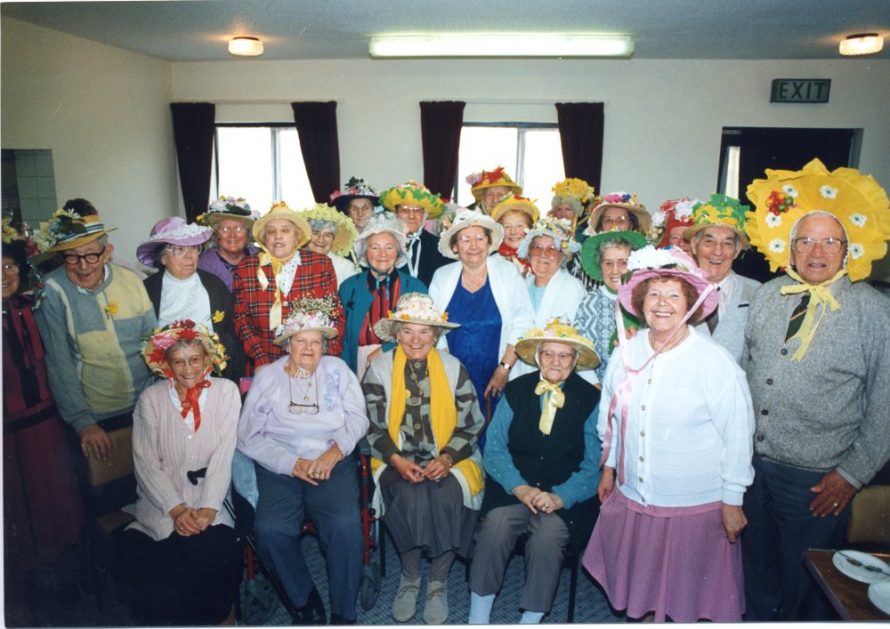 One of the Easter Bonnet parades at the Poplar Road Centre

There were Christmas parties, jumble sales, Easter Bonnet contests and there was also a Fish and Chip supper at St Nicks for at least one of the Easters whilst I was there, but cannot remember which year. With so many club members the hall at the Poplar Road site was not big enough for everyone at one sitting. At some of the parties there were entertainers. The fire brigade came and gave us a lecture about safty in the home. There was always something happening.

I was the official First Aider for the centre. Luckily (for them) all I had to deal with was cut fingers and just feeling unwell. On one occasion someone had broken their arm but they were whisked away by their family. 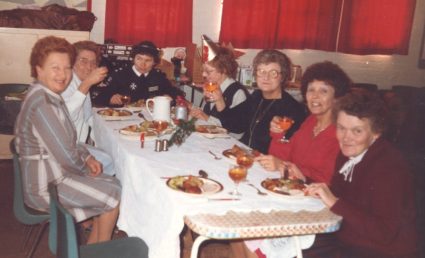 Christmas Party at the WRVS. On left Joyce Lightfoot. On the right Joan Lock wearing the hat, next to her is Irene Izard and nearest the camera on the right is Gina Cole

I do not remember many of the names of the club members it was too long ago. They were all lovely to my family. I remember their faces but their names escape me except Mr & Mrs Cohen and Bill Beaver (one of the first volunteer firemen). I remember when Bill had an article about him being in the fire service printed in the local newspaper and we said to him ‘do we have to pay to speak to you now?’ He was a lovely man and I hope to have his story printed here. Many of the elderly had retired here from London but some, like Bill Beaver, were old Canvey Islanders. If only I had made notes at the time, I was told so many stories by people no longer here, alas some of those stories may be lost forever.

As members of the WRVS we were also called upon for other occasions such as waitresses for the Housebound Parties at the Paddocks and to attend, after her death, at the Queen Mother’s laying in state.

The Queen Mother Patron of the WRVS

The Queen Mother was the President of the WRVS and when she was about 90 all WRVS members were asked that at the occasion of her death would we be prepared to go to London at almost a moment’s notice.  We were held to strict secrecy about anything we were told but arrangements needed to be made and one of those arrangements was to make cups of tea for the public during the laying in state at Westminster Hall. I never did attend the laying in state I had to leave to take a job and no longer had the time needed to do voluntary work.

My work, both at the WRVS and my other voluntary work (Volunteer Bureau and Victim Support), were instrumental in me gaining employment after being a full time mother for more than sixteen years.  I missed the club especially the laughs we used to have but many of the WRVS and club members were customers of mine in my new job. Some of whom caused me no end of problems at times but I would not change anything it was a difficult time and a great time. I think the great time won.