During the 1950’s it became apparent that there was a need to find new energy sources. The ever-increasing demand from industry and the domestic market, for both gas and electricity, required larger, more efficient plants to be built. Using mainly coal and oil products to produce gas and generate electricity, both of these products were becoming more expensive and supplies less reliable. One commodity which was plentiful, but largely wasted, was natural gas. 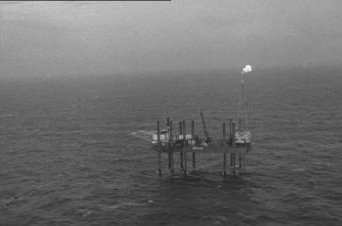 This gas, which was present in oil-fields and gas-fields, was usually flared off as a waste product. There were also large gas-fields around the world, but it was not a viable proposition to transport gas at this time, as the only means of storing it was in a compressed state. It had,however, been discovered that by cooling the natural gas to a temperature of -160deg. Centigrade (-259deg. Fahrenheit) at atmospheric pressure, the gas would condense into a liquid, reducing its volume by 600 times.

The gas in its liquid form is known as L.N.G. (Liquid Natural Gas/ Methane) and is one of the cryogenic liquids. The storage of this low temperature required materials that would stand such extreme temperatures, and at this time aluminium was chosen for tank and pipeline constructions. America had been liquefying natural gas and transporting it around the Great Lakes in purpose-built barges, for some time. A British Engineer, realising the potential of using this product in the United Kingdom, a feasibility study took place.

Due to its location and the deep-sea mooring, Canvey Island was chosen to be the site of a pilot scheme, the first in the World. L.N.G. was to be transported by sea from Lake Charles in The Gulf of Mexico, to purpose-built tanks at the Canvey site. Whilst under construction, a pipeline was laid from Canvey to Romford Gas Works, where the imported gas would be used as a feed-stock to make town gas at a calorific value of 500 Btu’s, the current C.V. of the gas that time. The Canvey pilot scheme was located on land owned by North Thames Gas, which had been purchased originally by the old Gas Light and Coke Company about 1930 to build a Coal Gas Plant. The land, however, until the Methane Scheme, had remained as farmland.

The construction of the pilot scheme was completed in 1959 and consisted of a pipeline on the now unused Texaco Oil Terminal jetty, two 1000 tonne double-skinned aluminium tanks, with perlite insulation between inner and outer tanks. Liquid gas pumps, suitable for the low temperatures, an evaporator to return the L.N.G. back to gas vapour and a steam boiler-house were installed. In America , a cargo vessel was converted to carry the L.N.G. in two aluminium tanks, insulated between the tanks and the ship’s hull with bolster-wood. The ship, formally known as the “Normarti” was renamed “Methane Pioneer”, the conversion being carried out in a shipyard at Mobile, Alabama.

During 1959, seven cargoes of L.N.G. were transported to the new Canvey Methane Terminal. The gas was evaporated and successfully sent to Romford Gas Works, where it was successfully reformed into town gas. At that time, it must be remembered that natural gas from the North Sea had not been discovered in usable quantities. The experiment to transport this coldest of liquids by sea, had been a success and with government approval, a contract with Algeria was made, to import 700,000 tonnes of L.N.G. into the U.K. for industrial and commercial use. 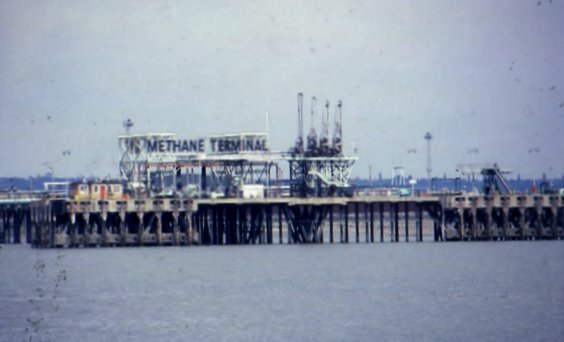 In 1962, work started to construct the permanent L.N.G. Terminal which consisted of six double-skinned storage tanks, each to contain 4,000 tonnes, of L.N.G.  plus two single-skinned L.P.G. (Liquid Petroleum Gas) tanks, a purpose-built jetty, evaporators, generator house and other ancillary equipment were installed. At the same time, at Arzew in Algeria , three 18,000tonnes above-ground tanks were constructed, and  one 18,000 tonne Inground tank to store the gas, prior to transportation to the U.K. The natural gas feeding the liquefaction plant at Arzew came from gas-fields at Hassi R’Mel in The Sahara Desert. 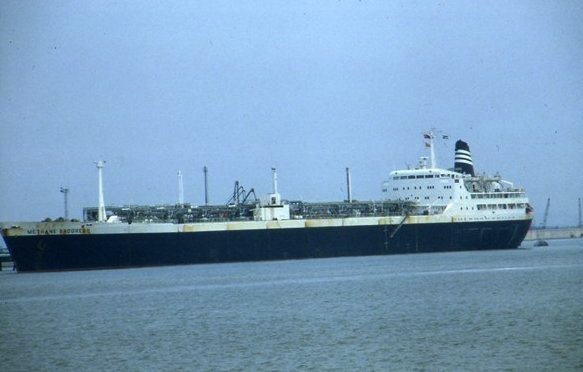 Two purpose-built ships were commissioned to carry the L.N.G. from Arzew to Canvey, these being “The Methane Princess” and “The Methane Progress” the first being built at Vickers Yard at Barrow in Furness and the second at Harland and Wolfe Shipyard in Belfast.At the same time, a pipeline from Canvey to Leeds, was constructed with off-takes to various Gas Works, plus a number of Industrial customers for their process plants. By 1964, the work was completed and on the 12th October of that year, the first 12,000 tonne cargo of Liquid Methane, the coldest cargo in the World, arrived at the Canvey Terminal from Arzew in North Africa.

The L.N.G. was evaporated in a number of ways including using sea-water drawn from the Thames. As well as the L.N.G. storage at the Canvey Terminal, there were two Continuous Catalytic Reforming Plants each designed to make15 million cubic feet of town gas at a calorific value of 500 BTU’s per day. The Reforming plant used a fuel to make the gas was a distillate (LDS), supplied by ship and a pipeline linking the Canvey Terminal with the Shell Refinery at Shell Haven, Esso storage at Purfleet and North Thames Gas Board stations at Romford, Bromley and Beckton.

After the conversion of households to natural gas, the Reforming Plants made a lean gas to dilute the Algerian Methane, which had a C.V. of approximately 1300 Btu’s to be compatible with the North Sea Gas at 1035 Btu’s. The two Reforming Plants required a large volume of distilled water to make superheated steam for use in the process. To supply this, each plant had an “Aiton Plant” which made distilled water from raw water drawn from the River Thames, heated by waist heat from the plant and flashed under vacuum. Each “Aiton Plant” was capable of producing 24,000 gallons per day.

In its heyday the Canvey Terminal employed approx. 250 personnel, had 6 x 4000 tonne above ground LNG tanks, 4 x 21000 tonne inground LNG tanks, 2 x 4000 and 1 x 10000 tonne LPG tanks, 3 Steam Boilers, numerous specialist pumps, evaporators, 4 compressor houses, evaporators, large generators to supply the Terminal’s needs if required, a jetty and 5 large seawater pumps and a Liquefaction Plant to re-liquefy Boil Off gas from the LNG. It was however mainly used to Liquefy North Sea gas for storage. There was a large amount of ancillary equipment including the Terminals Own fire station with 3 Rolls-Royce driven fire pumps and a Fir engine equipped with dry powder. 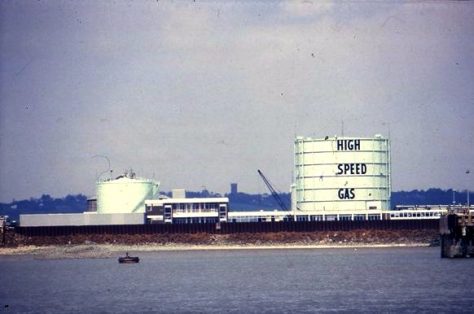 With the discovery of North Sea gas it was decided to build a national grid of gas pipelines all over the UK and convert every household and industrial user over to Natural Gas (Methane). Once again Canvey made history by being the 1st place in the UK to be converted. With the National Grid now in place a new control centre was set up at Hinckley in Leicestershire and again Canvey was used to recruit and train personnel, a number of local people relocating to the centre.

Due to problems with high running costs being incurred by the Inground Tanks it was decided to fill these in greatly reducing the Terminals storage capacity. The Terminal had become a plant only required on line at times of high demand which were becoming fewer due to the milder winters. A decision was taken to close the Terminal as it was thought there would be no need to import gas into the UK again in the foreseeable future, (this has since proved wrong and LNG, is imported once again into the UK at Isle OF Grain and 2 Plants Dragon & South Hook LNG Terminals at Milford Haven in Wales). British Gas closed the Terminal in 1994, was purchased by an LPG operator a couple of years later, converted to store and distribute LPG and is currently owned by Calor Gas.

From Canvey’s 1959 experimental project there are now 26 LNG Liquefaction Plants in 15 Country’s around the world with another 7 under construction and 24 more planned. There are also 60 import terminals in 18 Country’s.

You can see a film about the gas and Canvey here