Frank Saul was a professional footballer who played for most of his career with Tottenham Hotspurs. Frank was born on Canvey Island, third son of Charles and Gladys Saul. He made his debut as a fifteen year old in the Spurs Reserve side, two years later in September 1960 he was in the first team playing at Highbury. His main claim to fame at Tottenham was scoring vital goals during the 1967 FA Cup run. 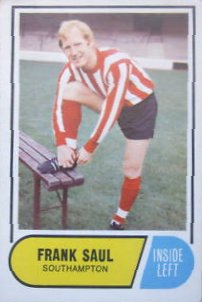 Frank Saul in his Southampton kit

In 1968 he was swapped for Martin Chivers and played for Southampton until he joined Queens Park Rangers in 1970 before finally moving on to Millwall in 1972. He was last heard of working as a builder in Essex.

If anyone remembers him on Canvey and can add anything or if Frank is out there and wants to say hi please comment below we would love to know more.