You are here: HomenextPeoplenext1 - HistoricalnextFrederick Hester & SonnextCanvey Island venture as a holiday resort ended in bankruptsy

Canvey Island venture as a holiday resort ended in bankruptsy

Canvey Island’s development as a residential seaside holiday resort can he traced back seventy years to 1901, when 1,000 plots were laid out for building. Named Southview estate, it was part of the old Leigh Beck Farm and was the start of a new era of development for the island.

The turn of the century saw the emerg­ence of Mr. Frederick B Hester as the master mind behind Canvey’s initial venture into the realms of holiday reports.

By 1904 he had achieved much. He had started his land auctions, and the amount of money he made from them can he judged by one held at Whitsun 1904, which made £600. Nearly a mile of the Winter Gardens had been built with glasshouses, 400 foot of a pier had been constructed and a horse-operated mono-rail was to be re­placed with an electric railway. Near to the pier was Cox’s stores, also opened in 1901 by a keen business man who could see what Mr. Hester was providing. Land values were increasing and plot prices of £5 were detailed. Branch meetings of Canvey-on -Sea Landowners’ Association were held at Cox’s. The association met monthly in London, where many of the owners lived. J. Wood grocer provision merchant and general stores, also provided a post office.

The approach to the Winter Gardens from Benfleet was marked by a large wooden tower, from the top of which prospective owners could see their land.

For the holiday-maker terms were cheap. The Swedish Bungalow and Marlboro* House, both now demolished, offered first-class accommodation and fare for £1 a week. This included a five-course late dinner of soup, fish in season, game, roast or boiled beef, lamb or veal, sweets, and cheese.

Second class was offered “at one of the bungalows, Winter Gardens” for 15/- a week and third class for 9/6 a week.

By the summer of 1904 the electric tram­way was under construction. Over 4.000 creosoted railway sleepers had been un­loaded and many had been laid on the permanent way. The cost was quoted as £48.000 and London newspaper reports spoke of Canvey being ready for the public a year later. Industrialists were not being overlooked and “handy little light factories” were to be built along the track. 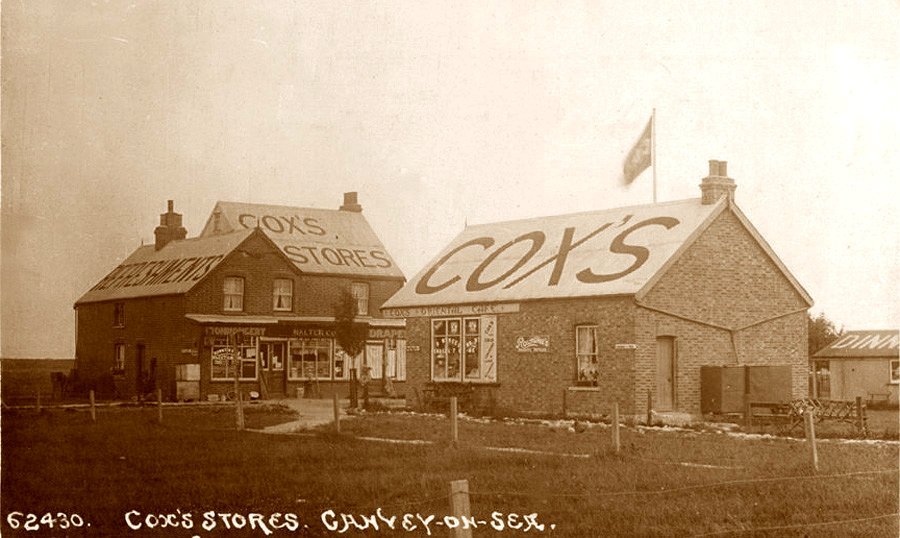 The site for the generating station was near a thatched cottage “where stood the old toll box in what are known as the days of the mono-track.”  But there was an ominous note. The new line had been delayed due to difficulty in the shipment of the thirty-foot rails (gauge 3ft. bin) and the Edinburgh contractors were said to have consented to compensation of £1.000 for the loss. 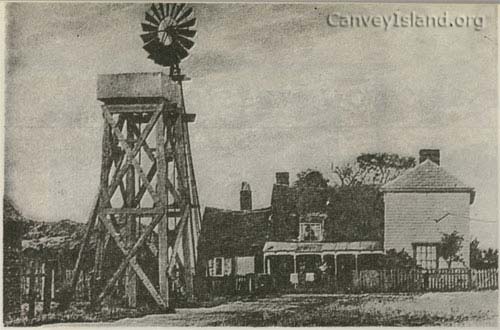 A new amenity was announced a new bathing shelter erected under the auspices landowners’ association. Open for ladies on Tuesdays and Thursdays, it was available at all other times (except of course Sundays) for men. Charges were twopence for association members and threepence for non-member.

During September and October work on the tramway progressed. Two hundred tons of concrete had been laid. Overtime working — including Sundays – was in progress.

To speed matters up further an engine was put on the rails and this drew truck-loads of material from the pier, unloaded from barges lying alongside.

In October there was another warning note – that occasionally there was delay in delivery of materials, which led to delay in building. At that time it was not known by whom the system would be administered when finished or in what was it would be controlled.

It was a very different story in November 1904, when work had stopped. Notice boards went up on materials saying that they were the properly of the contractors. Rumours regarding land rights on the track were rife and the development of the Winter Gardens had stopped.

By July 1905, when the London press had forecast that Canvey would be ready it was all over. Part of the electric tramway had been removed by the contractors. The cars had also been taken. The closure of the tramway line was caused by one person who would not over his property, it was reported, there was no more talk of rising land values. Syndicates or “pools” of Canvey landowners were formed and ground was for sale from £3 a plot.

A newspaper report on the affairs of Central Park estate said it had been in­formed that the estate had gone into liquidation. The liquidator was “the same gentleman who holds the onerous post of trustee of Mr. F. Hester’s estate in bankruptcy ” The report said that the park estate company “appears to have been inaugurated by Mr F Hester, who held a large share interest in it. Shares were sold at one time to several ladies and gentlemen interested in Canvey, but apparently the company was hampered by mortgages and other adverse circumstances – hence the winding up.” In 1906 more of the tramway was removed. 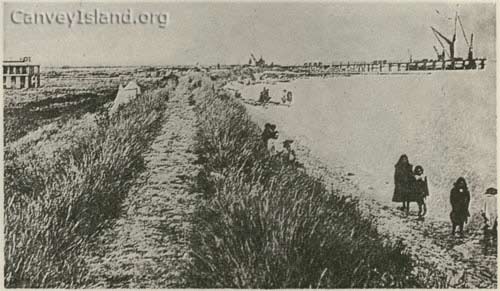 An old photograph showing the pier at Canvey Island. Shortly after it was taken all work on the projected pier was abandoned.

However, Canvey had attractions now for the visitors who had first discovered it. Its first bus service started on April 11, 1906, and ran from Leigh Beck, Canvey and Benfleet, taking forty-five minutes. The fare was sixpence single and luggage was fourpence a parcel. The fare remained unchanged until 1931, when the bridge linking the island with the mainland was opened and led to a deeper and lasting prosperity.

I would not normally find fault with Fred McCave’s slant on history, his expertise in finding out the facts is fantastic, but in this article he is not correct. Perhaps some facts were not available to him at that time. He states that ’emerg­ence of Mr. Frederick B Hester as the master mind behind Canvey’s initial venture’. It was in fact his father Mr Frederick Hester. Frederick Hester snr only lived on the island for a few years and moved from the area to Prittlewell about 1901. Frederick William Brewster Hester worked with his father and lived on the island at Wintergardens with his wife and two sons until his death in 1911 and believed to be buried in St Katherine’s Churchyard. Brewster was his mother’s maiden name.