A Vision for Canvey

Sometimes historic information comes out of the blue. Last August a gentleman by the name of Peter Gorman sent this message from Hemel Hempstead to the Canvey.org Forum:

‘Came across this website whilst googling ‘Frederick Hester’ re the history of my house. Frederick Hester built my house in Boxmoor together with about 8 others in 1885/1886. Great to see a photo of the man!’ 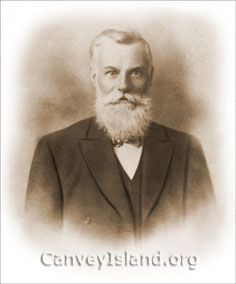 During my searches, having got in touch with Maldon District Council, I spoke to a lady in Burnham on Crouch who assured me that Hester’s signature was on the deeds to her house, too. Between those two dates/episodes fits a life of some extraordinary ups and downs – including the beginnings of the development of Canvey Island as a people place, rather than one of sheep and marsh. Frederick Hester, an entrepreneur with the finger on the pulse of his time, could almost be called ‘the Father of Canvey Island’, so great was his attempt at developing it and turning it into a vibrant holiday resort with the provision of a Winter Gardens, a pier and ingenious transport facilities. Hester bought cheap land on Canvey and began selling it as plots, thus giving lots of people the chance to own their own place on his ‘Holiday Island’. But, unlike many modern developers, he was concerned with the infrastructure and ploughed his money back into the venture. The phrase ‘putting your money where your mouth is’ comes to mind. A pier, or at least the beginnings of it, was actually built. 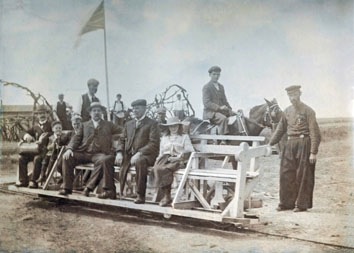 A previously unknown Hester conveyance outside the Winter Gardens. In the background we see the typically contorted branches that seem to have been the rustic style connected with the gardens, inside and out. The travelling bench must have been a good weather vehicle, though like Hester’s tram, horse driven and horse balanced and very environmentally friendly on its single track. The gentleman in the straw hat was a London publican, D. Ogg, of whom more later.

A tower arch or gateway was erected to allow prospective buyers a high view of their purchases. Winter Gardens glass houses were almost a mile in length, with their own rolling transport. A tramway, simply horse driven at first, was planned to be properly laid and electrified. Rails and creosoted railway sleepers were delivered, a car shed and generating station had been started. The tramway was planned not only from the Benfleet ferry across to Shell Beach via Winter Gardens, but a branch line was to lead to the Salvation Army quay on the Hadleigh side of the Ray and thence on to Leigh-on-Sea and the railway connection. Four prestigious new tramcars arrived by train to Benfleet station, but only one of them actually made it to the island. (It arrived by steam traction engine and returned pulled by three horses.) Hester had simply overreached himself and ran out of money. The vultures gathered. Nature did not help. Floods that year put some of the plots under water and contractors began baying for their money. His creditors did not have his vision, nor have Canvey residents forgiven him for raising their hopes. The tramway never materialized and it took until 1931 before a bridge was built. Without Hester other pioneers would hardly have risked their money, pioneers like Walter Cox’s Emporium, O.I.C. Powell, Hotel Kynoch, would they have taken their chances on the island? 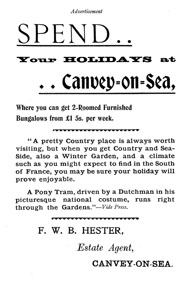 Frederick Hester’s father, George Hester, had been a Bridge Toll Collector at Fulham, Middlesex in 1861. (He is reputed to have been the last bridge keeper at Putney Bridge.) Ten years later he still worked for that company as ‘Bridge Company’s Servant’, but by 1881 he’d become a carpenter. When his son Frederick was born in Fulham on 21 May 1853, the birth certificate names George Hester as maltster/labourer. (The former home of George Hester, the bridge keeper’s house by Putney Bridge, is now a des. res. Reputedly it is now one of the homes owned by TV presenter Gloria Hunniford. A previous resident was comedienne Hattie Jaques, though I have so far been unable to verify this.)

The 1871-1881 Census returns list young Frederick Hester as carpenter. By 1901 he’d moved via Hemel Hempstead in Hertfordshire to 25 Stanley Road, Prittlewell. In 1891-1901 he was estate agent and a landowner by 1897-1901. His residence was ‘Winter Gardens’, Canvey Island, having bought parts of Knightswick, Leigh Beck, Kibcaps, Oysterfleet and Small Gains Farms on Canvey Island in 1897. 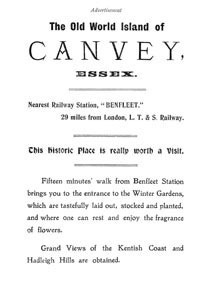 It was the eldest son Frederick William Brewster Hester (F.W.B.), who’s initials appear on the ads and publicity material extolling the virtues of Canvey as a Holiday Resort. In 1901 he lived at ‘Sea View’, Leigh Beck, Canvey Island, occupation builder’s journeyman. Ten years earlier he had been recorded as carpenter, following in his father’s footsteps. F.W.B. Hester married Elizabeth Norton in 1896 in ‘Rochford District’. There was one son, Garnet Frederick Hester, born in Pitsea in 1899. On 8 July 1911, alas, the 35-year-old ‘Estate Agent’, then living at ‘St. Omar’, Canvey Island, died in ‘London Hospital’. The death certificate gives the reason as: ‘Violent. Heart failure and exhaustion following on Tetanus caused by his cutting his thumb whilst using a bread cutting machine.’ An inquest was held the following day, recording an accidental death. F.W.B. Hester was buried on Canvey Island on 13 July 1911 by Joseph R. Brown. 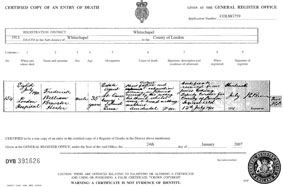 Frederick Hester’s achievements have been described by some in curt and disappointed tones: ‘After trading successfully for some years and following partial flooding caused by an unusually high spring tide, Frederick Hester went bankrupt in the midst of substantial plans for the island in 1904.’

Following the collapse of his business on the island, there must have been tremendous pressure on the family, when the move to a viable and convenient infrastructure waned and so many hopes were dashed. Hester’s wife Sibyl had become ill and eventually entered an institution for the mentally ill.

Hester’s second wife was an 18-year-old secretary when their relationship started and Hester was 35 years her senior. The first three children were daughters, a son followed later. In 1907 the couple fled to the relative sanctuary of Wallasea Island, with the intention, it is rumoured, of doing what he intended with Canvey, ‘turning Wallasea into a new Burnham-on-Crouch’. The young lady became a teacher to the island’s children in a tiny school. Hester carried on dabbling in property in his new wife/partner’s name. In Burnham he owned a former quarry known as The Sandpit, where he kept Jersey cows and horses. And caravans. In the early 1990s the area was redeveloped into a small modern housing estate – Hester Place and Sandpit Lane. The man who almost succeeded in turning the agricultural backwater of Canvey into a pleasant and favoured holiday island died on 18 November 1934 at ‘Sandpits’, Burnham-on-Crouch, at the age of 81. ‘Hypostatic pneumonia, acute bronchitis and senility’ were recorded by William Parker, M.D. Present at his death was his daughter Edith Marjorie. 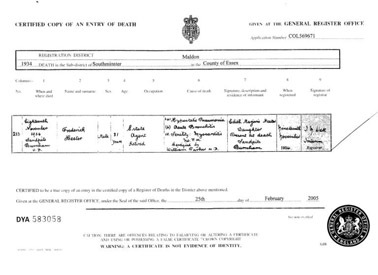 Frederick Hester can still be found in spirit over much of the built-up area of Canvey Island in his ‘Dutch’ legacy of street names, etc. – however spelled – though of the man himself there is not a mention, no Hester Avenue, not even a plaque. Isn’t it about time he was exonerated?

ISN’T IT ABOUT TIME FREDERICK HESTER WAS ACKNOWLEDGED SOMEWHERE IN WINTER GARDENS, WITH A BLUE PLAQUE FOR INSTANCE? 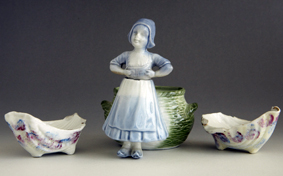 A tangible connection to Hester’s Winter Gardens, a souvenir in his beloved ‘Dutch’ style, as well as a pair of shells, very likely meant as ashtrays. It must be rare for such objects to survive their time on mantelpieces. Originally the young lady used to wiggle sideways from the hip, though one of the little points of balance has been lost.

Canvey, it can be argued, might have happened anyway, but if it had, it is certain it would have been vastly different. It is fruitless today to speculate whether father or son had the grand ideas. But they still did enough to be commemorated. If it had not been for the cashflow problem brought on by overstretching their resources while bringing an infrastructure of trams, pier, etc. to their plots, who knows what Canvey might have achieved? With a tram running to Leigh-on-Sea, the transport system would certainly be vastly different. No-one else has even attempted anything as farsighted as that