By Fred McCave, published in Canvey and Benfleet Recorder 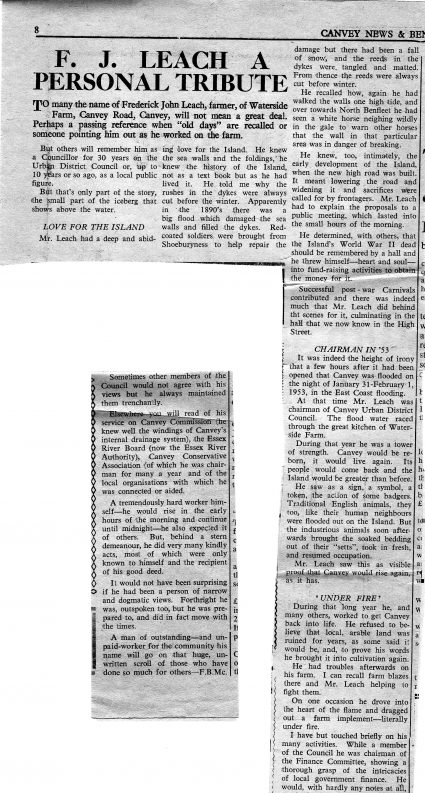 To many the name of Frederick John Leach, farmer, of Waterside Farm, Canvey Road, Canvey will not mean a great deal. Perhaps a passing reference when “old days” are recalled or someone pointing him out as he worked on the farm. But others will remember him as a Councillor for 30 years on the Urban District Council or, up to 10 years or so ago, as a local public figure. But that’s only part of the story, the small part of the iceberg that shows above the water.

Love For The Island

Mr Leach had a deep and abiding love for the Island. He knew the sea walls and the folding, he knew the history of the Island, not just as a text book but as he had lived it. He told me why the rushes in the dykes were always cut in winter. Apparently in the 1890’s there was a big flood which damaged the sea walls and filled the dykes. Red-coated soldiers were brought from Shoeburyness to help repair the damage but there had been a fall of snow and the reeds in the dykes were tangled and matted. From thence the reeds were always cut before winter.

He recalled how, again he walked the walls one high tide and over towards North Benfleet he had seen a white horse neighing wildly in the gale to warn other horses that the wall in that particular area was in danger of breaking.

He knew, too, intimately, the early development of the Island, when the new high road was built. It meant lowering the road and widening it and sacrifices were called for by frontages. Mr Leach had to explain the proposals to a public meeting, which lasted into the small hours of the morning.

He determined, with others, that the Island’s World War II dead should be remembered by a hall and he threw himself – heart and soul – into fund-raising activities to obtain the money for it. Successful post-war Carnivals contributed and there was indeed much that Mr Leach did behind the scenes for it, culminating in the hall that we now know in the High Street.

It was indeed the height of irony that a few hours after it had been opened that Canvey was flooded on the night of January 31 – February 1, 1953 in the East Coast flooding. At the time Mr Leach was chairman of Canvey Urban District Council. The flood water raced through the great kitchen of Waterside.

During that year he was a tower of strength. Canvey would be reborn, it would live again. Its people would come back and the Island would be greater than before. He saw as a sign, a symbol, a token, the action of some badgers. Traditional English animals, they too, like their human neighbours were flooded out on the Island. But the industrious animals soon afterwards brought the soaked bedding out of their “setts”, took in fresh and resumed occupation. Mr Leach saw this as visible proof that Canvey would rise again, as it has.

During that long year he, and many others, worked to get Canvey back into life. He refused to believe that local, arable land was ruined for years, as some said it would be and to prove his words he brought it into cultivation again.

He had trouble afterwards on his farm. I recall farm blazes there and Mr Leach helping to fight them. On one occasion he drove into the heart of the flame and dragged out a farm implement—literally under fire.

I have touch but briefly on his many activities. While a member of the Council he was chairman of the Finance Committee, showing a thorough grasp of the intricacies of local government finance. He would, with hardly any notes at all……the rest here is missing…….

Sometimes other members of the Council would not agree with his views but he always maintained them trenchantly.

Elsewhere you will read of his service on Canvey Commission (he knew well the windings of Canvey’s internal drainage system), the Essex River Board (now the Essex River Authority), Canvey Conservative Association, of which he was chairman for many a year and the local organisations with which he was connected or added.

A tremendously hard worked himself—he would rise in the early hours of the morning and continue until midnight—he also expected it of others. But, behind a stern demeanour, he did very many kind acts, most of which were only known to himself and the recipient of his good deed.

It would be surprising if he had been a person of narrow and dogmatic views. Forthright he was, outspoken too, but he was prepared to, and did in fact move with the times. A man of outstanding—and unpaid-worker for the community his name will go on that huge, unwritten scroll of those who have done so much for others.