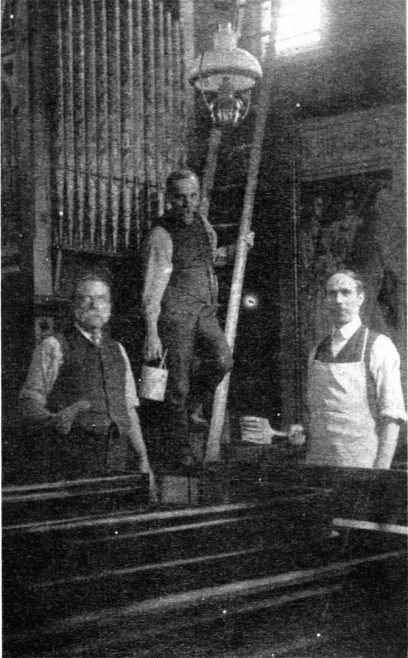 This is a picture taken inside St Katherine’s Church probably c1897. On the ladder is Rev. Henry Hayes, on the left is John Harrison, on the right James Wood both Churchwardens

Henry was born in Holloway in 1839. He was orphaned and brought up by his foster mother, Susan Chambers at her home at 24 Georges Grove, Islington. He was educated at Kings College, London and eventually became a priest in 1868. He was Curate at Passenham with Denshanger until 1870, then the Minister of Little Heath in Essex until 1872. Although it is recorded that he was a Curate at Woodchurch in Kent in the 1871 census and their records show he was there officiating at Baptisms, Burials and Marriages from October 1870- April 1871. Perhaps this was a temporary placement due to illness or some other event in Woodchurch.

Before Henry’s arrival on Canvey Island the Rev. Thomas Julius Henderson, vicar of South Benfleet conducted the services at St Peters. Most of the burial’s, marriages and baptisms were conducted at St Mary’s, South Benfleet.

Canvey Island was a very different place when Rev Henry Hayes took up his ministry on the Island in 1873. The Island was divided between nine mainland parishes of North Benfleet, South Benfleet, Bowers Gifford, Hadleigh, Laindon-with-Basildon, Pitsea, Prittlewell, Southchurch, and Vange. There had been no resident Vicar before Henry Hayes. The island was made up of scattered farms with a population of some 289, (PO Directory 1878) if the census was to be believed (difficult to be sure with the census registered in the different parishes). There was a church, St Peters, built in 1845, the third of the churches built on the site. The Lobster Smack, known for its bare-knuckle prize fighting, had been around for about a hundred years by the time Henry Hayes set foot on the Island. There was no school, no water supply, no post office and the only way on and off the Island was ‘by a passage to South Benfleet, by a raised causeway across the creek, fordable at low water’ (PO Directory 1841). This was supplemented at some point by stepping stones and a ferry. Over the next few years Henry’s mission was to bring about change to Canvey Island and that he surely did. 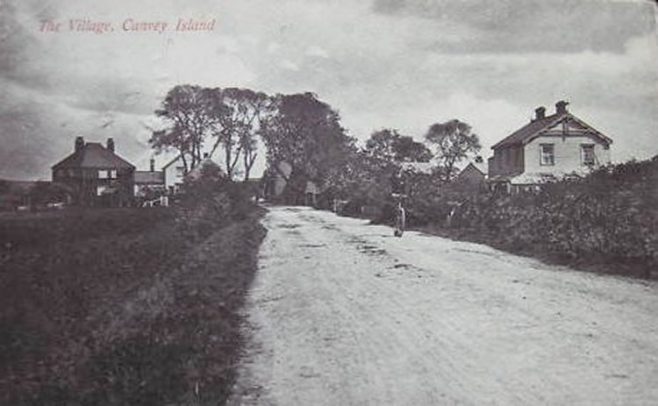 Looking north towards the village with the vicarage can be seen on the right, the 1821 Dutch Cottage and the Red Cow PH in the distance

One of the first projects Henry embarked upon in 1873 was to build a vicarage just south of the village in what is now Haven Road. This was quickly followed by the first school on Canvey Island situated just across the road from the church which was opened in 1874. According to the 1882 Kelly’s Directory there were 60 pupils registered at the school. 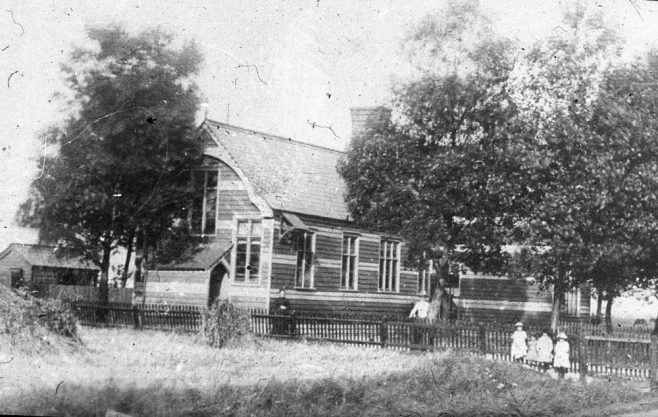 The tiny church, which had been built in 1745, was too small and was not considered suitable for expansion so it was demolished and rebuild much bigger and grander some 20 feet further back from the road. The porch, five stained glass windows (which had been added to St Peters in 1862) plus some of the furniture were reused in the new church which was consecrated by the Bishop Claughton of Rochester on the 9th November 1875 and dedicated to St Katherine. 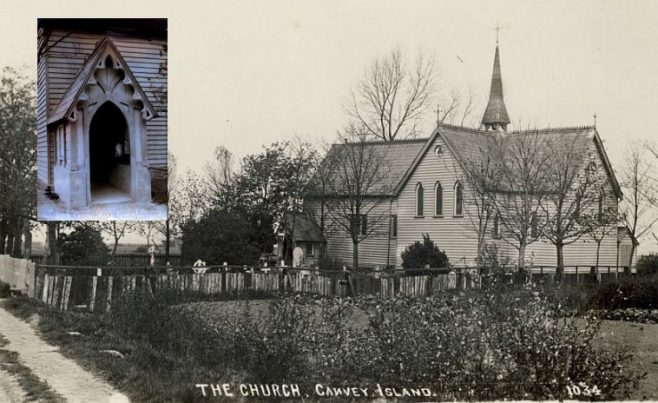 By 1880 Henry Hayes had established himself and brought Canvey Island, especially the village area up to a standard where Henry Hayes must have felt Canvey Island could be a parish in its own right. Thomas Legh, Lord Bishop of Saint Albans instigated the Scheme that was to eventually be presented to the Queen at Court on the 2nd March 1881. Part of the proposal stated:

As previously mentioned Henry was brought up by his foster mother Susan Chambers. In 1887 Henry dedicated a window to her presumably soon after her death. The main picture below was taken in the 70’s when the church was derelict. The window itself can be seen in the main picture to the left just above the door. The inset at the bottom is of the metal plaque which was located just below the window. The inset on the right is of the window as it is today. 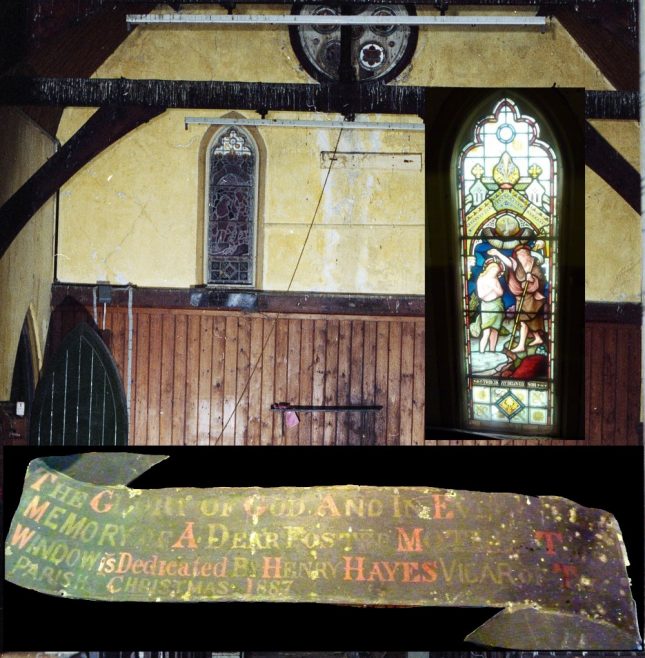 The Glory of God and in Everlasting memory of a dear Foster Mother this window is dedicated by Henry Hayes Vicar of the Parish. Christmas 1887

In 1889 perhaps one of Henry’s greatest achievements was bringing fresh water to the Island. The only water supply the Islanders had access to at the time was from collecting rainwater and from the ditches. Financed by public subscription and 50 guineas from the Corporation of the City of London the parish pump was opened on the 5th December 1889 by the Chairman of the Port Sanitary Committee. There was a permanent committee set up of which Rev Hayes was an ex-officio member along with William Collingridge MD, Abraham Manning and Arthur Mayhew Clark. The well was 312 feet deep and positioned at what is now the junction of Long Road, Canvey Road and Haven Road. It was built with a thatched roof in a Dutch design.

More about the history of the pump can be read here. 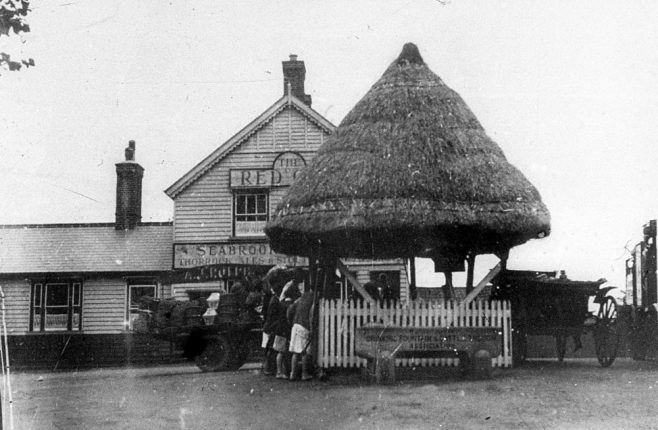 After the Parish Councils Act of 1894 Canvey’s Parish Council was formed with five councillors. Rev Henry Hayes was a member of that council. Another of his ideas was to have a bridge connecting the island to the mainland. The matter of a bridge was to be brought up at the Rochford District Council meeting (which covered Canvey) about a month before Rev Henry Hayes died. They postponed the matter to the next meeting so that he could attend and put his ideas to the Council. He was never to make that presentation as he died on the 8th December 1900. Further action on a bridge did not occur until 1929.

Rev Henry Hayes was buried at Highgate Cemetery and later a memorial window was erected on the north side of the Nave in St Katherine’s in his memory.