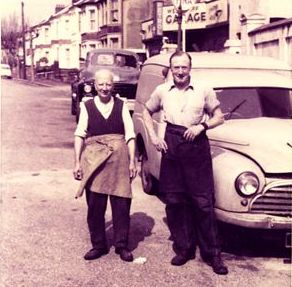 Westcliff Hotel in the 60s

Ashley George Old (b. 1913, d. 2001) was an artist best known for documenting the lives of prisoners of war forced to construct the Thailand-Burma Railway. He trained at Northamptonshire College of Art, then the Clapham School of Art.

During World War II he was stationed in Singapore, and when it fell to the Japanese in February 1942 he was taken prisoner and sent to work on the aforementioned Death Railway. 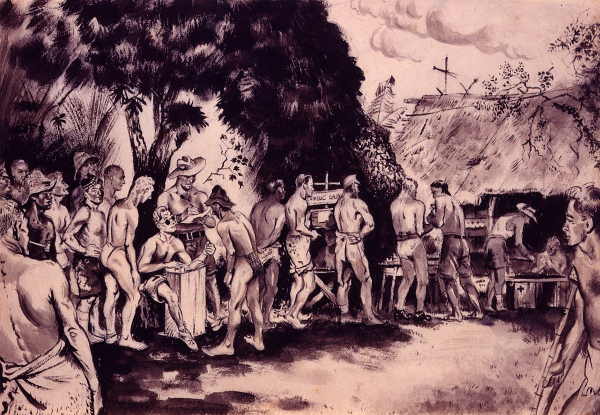 One of his pictures drawn/painted when he was POW

According to information received Ashley (known as George) worked at the Westcliff Hotel in the 1960s where he can be seen in this photo. He later worked for Egan’s, on Canvey Island in the Maintenance Department as a groundsman. When he retired in the 80s the company got him a new bike. He did speak of his time as a POW in the Far East but he never truly recovered from the trauma of his wartime captivity.

When his talent was rediscovered he appeared from time to time in the local newspapers. He was formally trained as an artist but we have been told by someone who knew him well that George was born to paint. He had a passion and a conviction about the importance of his work. His last series of works were undertaken in 1959. It is understood that he stopped painting because it brought back too many painful memories of the past. His POW work is mainly in the State Library of Victoria, Australia. There is one at the Imperial War Museum in London. Many portraits of individuals were painted during the war and have been kept by the sitters. These paintings occasionally come to light. Sadly, much of his work was destroyed in an Essex repository fire in the late ’60’s.

He originally lodged with the Woof family in Brixton in London. When they re-located to Ruskoi Road on Canvey Island he came with them. His final years were spent in the Amelia Blackwell House in Link Road.

He has been described as being one of the most fascinating men you could possibly meet. It was strongly suggested that he would have been a world famous artist if he hadn’t been so traumatised by his experiences as POW on the Burma railway.