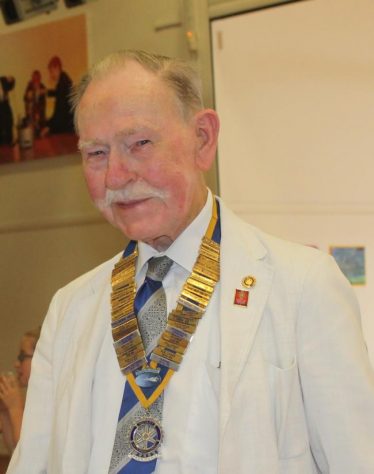 A COMMUNITY man who had been awarded a British Empire Medal for his bravery as a policeman has sadly died. John Puddefoot, of Canvey, died aged 96 at Southend Hospital.

The heroic officer had been awarded a BEM in 1962 after persuading a would-be burglar, who was armed with a gun, down from a roof without anybody getting hurt. And the hero to the country also became a hero to his community.

He became a member of a number of groups both on Canvey and in Basildon. These included the Rotary Club of Basildon Concord. He was also the district warden of St Nicholas Church, on Canvey.

These were just some of the amazing things Mr Puddefoot did with his life. Another was while he worked as an advisor to the Nigerian Government.

His daughter, Linda Lillywhite, 74, of Benfleet, paid tribute to her beloved father. She said: “He was a great joiner of clubs and had a good sense of fun and he also liked to party. He was awarded the medal while working with the police. Someone was trying to break into a shop in Bridgend and had a gun. He got up on the roof and got the gun off the person. I think he was proud of the medal but he felt that is wasn’t just him as there was a team of people that day.”

He was the oldest serving Rotarian at the Rotary Club of Basildon Concord and leaves behind lots of friends with fond memories. A spokesman for the club said: “He was an old school gentleman with lots of warmth, compassion. He was a true Rotarian with all the beliefs of service above self, which is the rotary motto. His passing onto higher service was expected as he had been unwell and frail for some time.”

The church community will also miss his warmth as will the University of the Third Age. A spokesman for the church said: “Quickly he became part of the very fabric of our church. “

“Through U3A he taught many to dance with grace and dignity – which were hallmarks of his own life. “

From an article in the Echo 2018 by reporter Matt Critchell