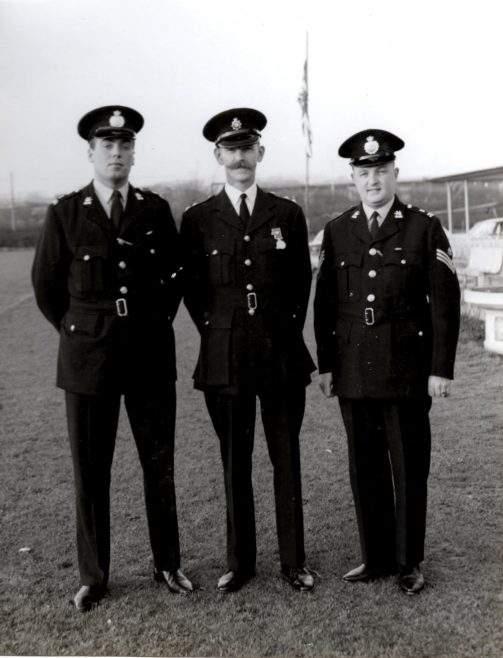 Sergeant John Puddefoot is in the middle

There you are on a cold, dark winter’s night shortly before Christmas 1961, with the wrong end of a double-barrelled shotgun six inches from your stomach. How would you cope with such a scenario? Could you cope with it? There now follows the story of a Canvey resident who not only dealt with just such a situation, but survived to tell the tale and receive an award for it.

One Friday night at about 10.30 p.m. in Glamorgan, South Wales, Police Sergeant John Puddefoot took up position outside one of the rougher pubs in the area. He was there with one of his constables hoping to be a visible deterrent to anyone who might think of starting any trouble. At that time in the 1960’s people tended not to misbehave in the presence of police according to John, so all was quiet.

Another constable who had been walking the beat in a different part of town arrived and reported that he thought he had seen movement in some shop premises. He had investigated but could not see anything. The Sergeant went with him to the rear of the shops and as he looked along them he realised that one of them was a jeweller’s. He sent his constable back to the police station to contact the owners of the jeweller’s and the two shops either side of it so they could gain access and see if anything was amiss. He remained there on his own keeping watch. Today he would have radioed for help or used a mobile phone but of course nothing like that existed in the Sixties. Fortunately a Detective Constable, whom he knew very well, was in the area and came to see what was going on. Now there were the two of them standing outside the backyard of the shops quietly keeping vigil. In front of them was a high wall and a solid wooden gate. Suddenly a head briefly popped up above the wall and disappeared again. With this they knew that someone was definitely where they shouldn’t be. In the yard behind the wall there was a single storey extension with a sloping roof. Sergeant Puddefoot shouted to the would-be burglar that there was no escape and the shops were surrounded. The latter was stretching the truth a little because of course there were only the two of them standing guard!  The man climbed on to the roof obviously trying to escape but when the Sergeant shouted at him he looked round, slipped and in order to save himself he put his arm up. At this point the two policemen realised that the man was holding a double-barrelled shot gun. Sergeant Puddefoot then asked the Detective Constable to help him up onto the wall so that he could climb over it. Unfortunately there was a gap between himself on the wall and the lean-to. By this time the man was lying in the valley between the two parts of the roof. Whilst all this was taking place, the Sergeant was talking quietly to him, trying to convince him to give himself up. He then took a chance and leaped across the gap and landed on the roof. He spread-eagled himself because he knew it wasn’t a strong roof. The burglar stood up and was now pointing the gun directly at him. Despite this dangerous situation John still continued to talk to him ‘Dutch Uncle’ style. The talking seemed gradually to be having an effect because the man would lower his gun and John would inch a little closer to him. Then he would raise it again and John would stop still and continue talking. After a while he was quite close and he realised that the man was about to give up the weapon. During this time John’s colleague was also about to shin over the wall, but because John thought that this would frighten the man again, he ordered the Detective Constable to get down off the wall. At last the man surrendered the gun and as he did so he said ‘It isn’t loaded’.  Later when the man was searched they found he had a bandolier full of high velocity cartridges as well as a 157 rounds tucked under his jumper being supported by his belt as well as a scout’s dagger tucked into it. 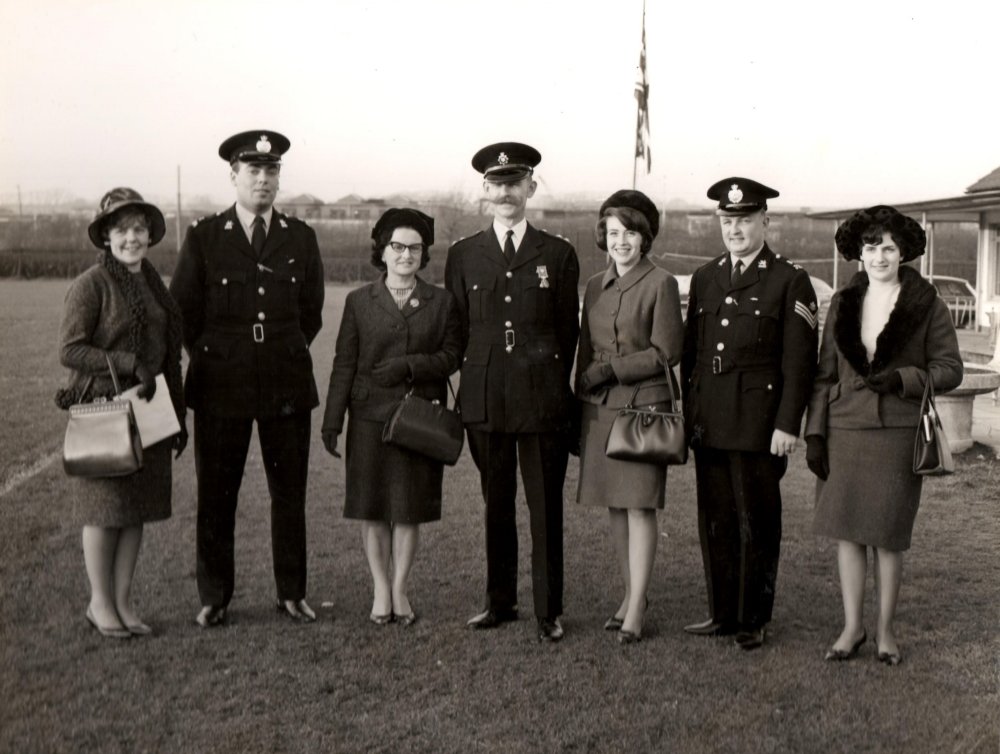 The brave policemen and their families.

In the meantime a patrol car had arrived in the road at the front of the shops and one of the constables from it had managed to climb up the front of the building and over the roof and was quietly coming down the drainpipe on the back wall just as the man was handing over the gun. John could see the constable but the burglar couldn’t. John hoped that he would get the gun before the constable’s presence was noticed. Thankfully that’s what happened. The constable then grabbed the man, held him against his chest and deliberately fell off the roof with him. Once in the yard he took him prisoner. As John was preparing to get down from the roof he noticed a second man hiding in the yard. He wasn’t sure if that man had realised he’d been seen. In hindsight John thought he should perhaps have kept quiet and dealt with him on his own but instead he shouted to his colleagues to be careful because there was a second armed man at which point the man broke cover and ran up the stairs at the back of the building so that he was now looking down on them. For a second time in one night John had a gun pointing at him but again he tried to reason with the man. This time however, it didn’t work. There was no doubt that the gun was loaded because the man fired it into the air. John took the opportunity to slide off the roof and try and shelter behind the corner of the building at which point another shot was fired which hit the wall of the building just above where the constable and the prisoner were standing. Now the man had to reload the gun and while he was temporarily distracted John rushed up the stairs hoping to get hold of the man before he could complete the reloading. He went up the steps and was inches away when the other man snapped the gun shut. John who still had the other gun in his hand used it to take a swipe at him and managed to knock the other man’s gun away and at the same time catch him on the jaw knocking him backwards. Two shells fell from the man’s hand; he’d fudged putting the cartridges in and shouted that the gun wasn’t loaded. Meanwhile other officers had broken down the gate and the two men were brought under control and arrested. They were taken back to the police station. While walking back John felt his knees buckle which was noticed by one of the constables who asked if he was all right. He said he was fine.

Outside the police station there was a group of about 20 people milling about trying to find out what had been going on. From somewhere a large glass of brandy was handed to the Sergeant which he drank down in one go. Later he found out it had come courtesy of the publican from across the road. At that point he was feeling ok and gave instructions to search the men etc. He retired to his office to write his notes (which must be done at the time of the incident or as soon as possible afterwards). He asked for some tea to be sent in. He noticed whilst writing his notes that his hands were shaking a bit. By the time the tea arrived he was unable to pick up the cup and had to tilt it and sip it from where it stood on his desk. He eventually got home at 7a.m., showered and went to bed, after saying to his wife he would have to be up again at 9a.m. to be at the station at 9.30 a.m. by which time the reporters would have arrived. Later that same morning he got back at 11 a.m. to a very frightened and cross wife asking him what on earth he had been doing. She’d had to hear the story from the neighbours. 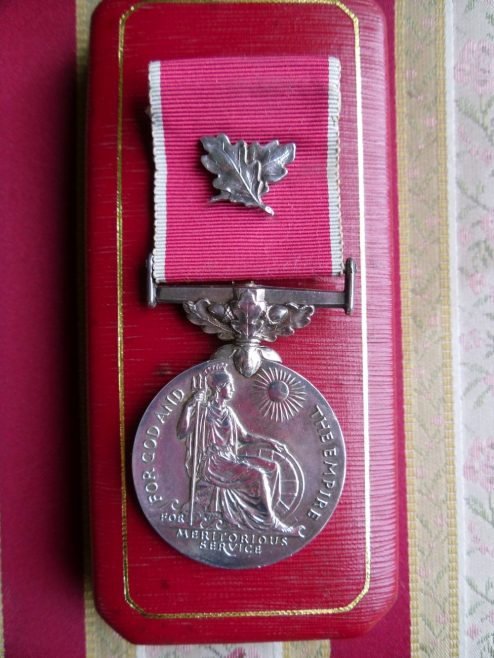 In the following New Year he went on a six month course in order to gain promotion. During a week’s break half way through he received a letter from Downing Street to say that his name had been put forward to receive the British Empire Medal for Gallantry. He had to keep it a secret until it had been published in the London Gazette.

He was both pleasantly surprised and a little disappointed. His disappointment came from hearing shortly before this that the Beatles had been awarded a slightly higher accolade for services to pop music which he felt somewhat devalued his award.

By the time he returned to college the announcement had been made so now everyone knew. At the end of each week there was a college dinner which the Commandant and his lady attended. The lady would be escorted into dinner by a chosen student. That week it was John’s turn. At the other end of the table sat the Vice President, who, it turned out, also had a B.E.M. which had been awarded for his work on the Norfolk coast during the catastrophic 1953 floods. John was to be presented with the medal on the 12th November which coincidentally is his birthday. Also coincidentally the last person in the force, an Assistant Chief Constable, to be presented with such an award also had it presented on his birthday. By the time of the medal ceremony John had already received his promotion to Inspector with Leeds City police.

At the ceremony he was presented with the medal by the Lord Lieutenant and not  the Queen because she had been unavailable. He proudly wore his newly acquired Inspector’s uniform. The Detective Constable and the young constable from the police car both received Queen’s Commendations. The former was promoted to Detective Sergeant but the young constable didn’t receive a promotion because he wasn’t considered experienced enough. John’s ‘old’ force, which he’d only left a fortnight before, laid on a celebration which he, his wife and daughter attended.

His medal is the British Empire Medal Civilian Division for Gallantry. The Gallantry part is shown on the medal ribbon by crossed oak leaf sprays.