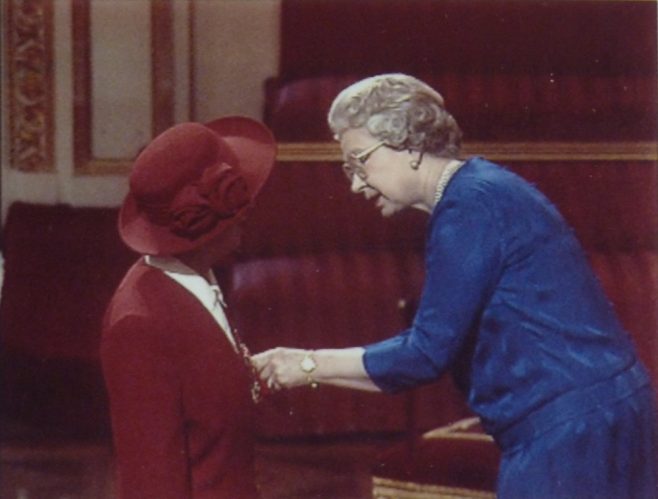 Phyllis Owens MBE who in her own words is ‘Ninety Years Young’ was awarded the MBE in 1994 for her untiring work with different organisations on Canvey Island, in particular her work with Canvey’s Young People.

It took 5 years to get the MBE awarded. She said of her experience at the palace, “They put everyone at their ease.” Although she had a long conversation with the Queen she cannot remember much about what was said however one thing stands out very clearly. The Queen asked her where she came from and although all through the award ceremony it had been stated she came from Castle Point, Phyllis very clearly stated she came from Canvey Island and the Queen said “Jolly Good.”

Phyllis was born in London in 1920 and moved to Canvey with her parents, Albert and Kathleen Vigor in 1941 just before her 21st Birthday. The family had been advised to move to where there was sea air because of her mother’s health. This was the first time she had ever heard of Canvey Island. She was then working in a laboratory and when her colleagues found out where she was moving to they were taken aback. “You know they have the red lights on the Island?” they said. Phyllis being rather naive said, “What are the red lights?“ she said. “Don’t you know? Well Canvey is a well known place where business men take their secretaries for a dirty weekend.” But Phyllis told us the ‘red lights’ had been moved off the Island before they moved here in ’41. 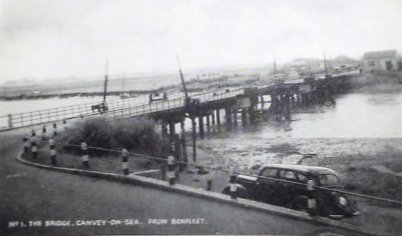 Phyllis found Canvey very different from crowded London. As she came across ‘that little bridge’ she thought ‘Gosh what have I come to!’ her first impressions were of shacks with corrugated roofs, very primitive. She was quite pleased to see they actually had a house to live in. The house originally belonged to Major Ward who had it as a holiday home. Phyllis also remembers Long Road, it really was a long road with few houses and because of that if you had two people standing one at each end they could see each other waving. There were two or three big houses on the Long Road they were for the posh folk. There were dykes everywhere and houses all had little bridges over them.

At their house in Welbeck Road they had a cesspool in the garden and they had to pump it out and there was a ditch running round the garden to take this water away. Unfortunately some years later Phyllis’ daughter fell in, not nice! After the floods of 1953 Col Fielder got them put on main drainage so they never had to empty it again. 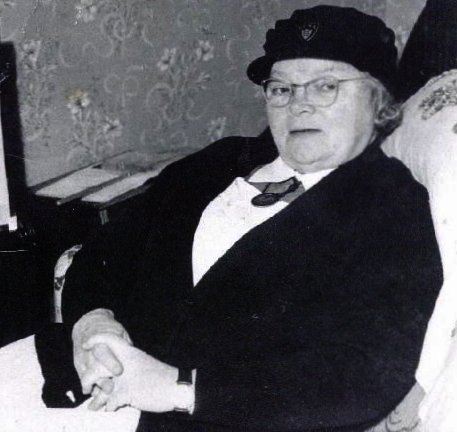 In 1942 Phyllis’ niece was born at the house in Welbeck Road. Her sister Irene had gone into labour prematurely. Baby Bronwen weighed just 2 ½ lbs, very small to survive back then. Nurse Morgan and Dr Stevens were in attendance. Dr Stevens, who lived nearby, told the family that the baby could go to Rochford but they were very busy with soldiers being brought back from the front and would not have the time to look after her. So he suggested making an incubator, they set to finding the necessary items required. A big round laundry basket was found, lined with blankets and towels with hot water bottles underneath. Bronwen was wrapped in ‘gungy tissue’ (I probably have the wrong spelling here) and a little bonnet with tiny nappies that were about 2” square. They had to feed her on 2 drops of whisky and 3 drops of water every two hours. (I am sure there will be some tut-tutting here) Dr Stevens said no one was to see her because she was so vulnerable but Nurse Morgan kept letting people in. However I can report that Bronwen survived her early entry into the world. 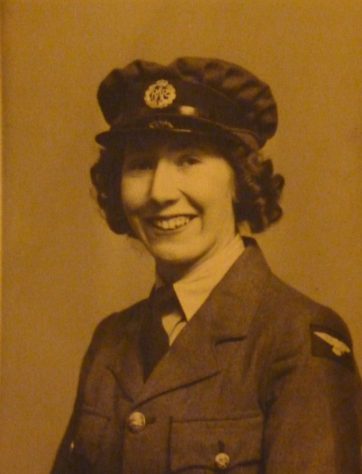 Phyllis in the WAAF

In 1942 Phyllis was called up and joined the WAAF so she was away for some time and only heard about what was happening on the Island from her mother. Her mother wrote and told her about the bombings and the loss of life including Ray Howards brothers. She was given three months compassionate leave in 1945 when Dr Stevens and Mrs Fisk wrote to the airforce because her mother was in hospital after an operation on her stomach. After her demob she went into nursing and in 1948 she married Peter Owens in Calvedon. Peter was in the RAF which he left in 1952 and the couple made their home in Welbeck Road with Phyllis’ parents. 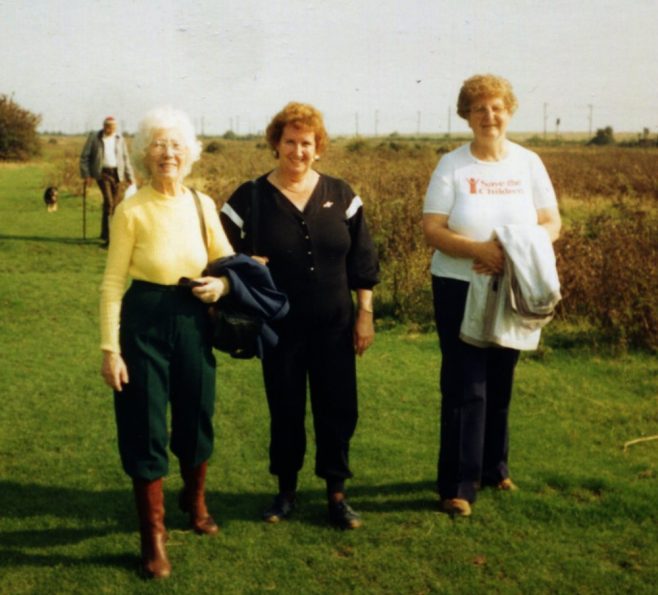 1995 Save the Children Walk. Phyllis is on the left

When she returned to Canvey Phyllis got involved in many aspects of Canvey life she worked with the Brownies, the Guides and Girls Life Brigade at St Annes, St Katherine’s and St Nicholas. She worked at the clinic in Furtherwick Road when they were weighing babies, until it was pulled down in the 60’s when they moved to the new one in Foksville Road. She was a member of the local Save the Children Fund; they would have a stall in the market every week and the Red Cross. When her husband left the RAF he was invited to join the Air Training Corps as an instructor and after one of their meetings he came home to tell Phyllis he had volunteered her services for the organisation. The couple had quite a good social life; Peter set up a Chiropodist Business in the High Street and belonged to the Chamber of Trade so they went to all their dinners. The Save the Children Fund was always having bazaars, dances and the ATC had different events too. 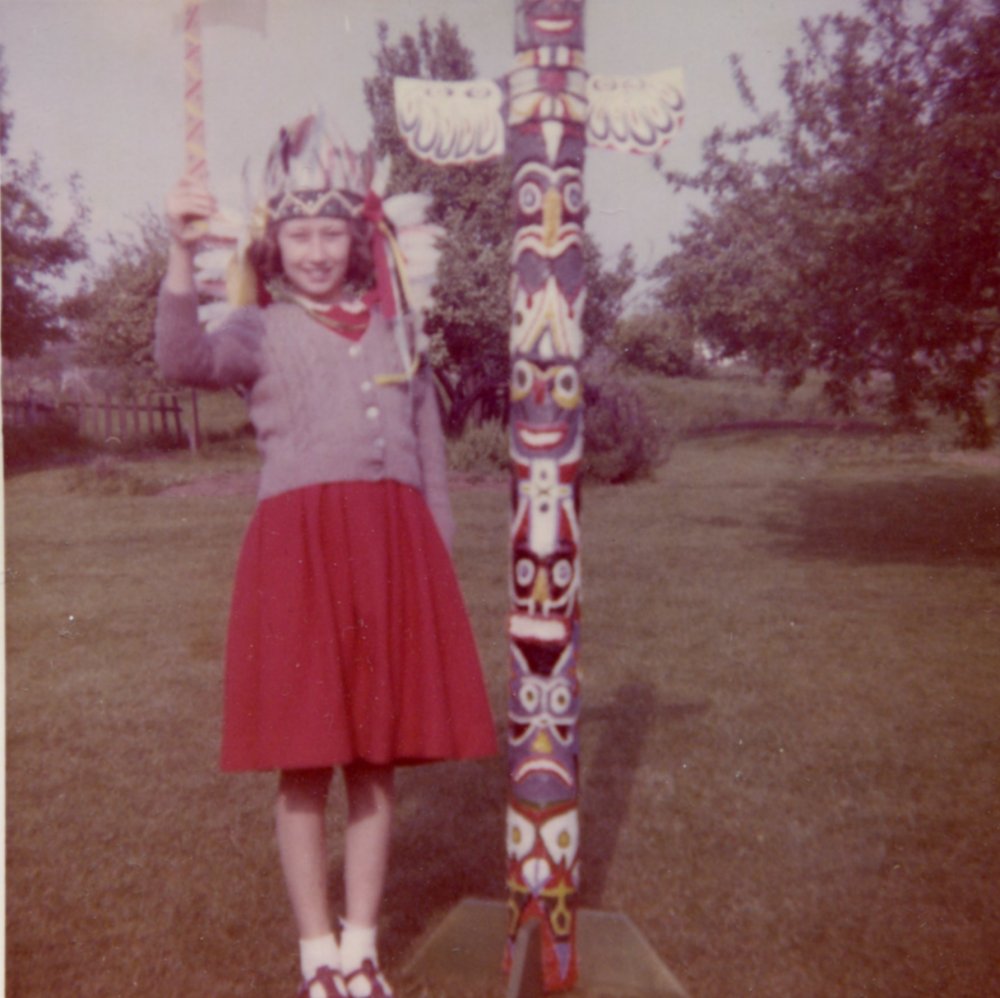 Kathleen, Phyllis’ daughter was a member of the Georgettes dance group which was very popular on the Island. Phyllis herself did Tap Dancing at the Methodist Wives Club until just three years ago and joined in their exercises but now just sits and watches them.

You will find in a separate section with some of Phyllis’ poems. She has been writing poems from when she was young. She wrote the Childrens Corner in the Church Magazine for 17 years, apparently Miss Allbutt was asked to do one from ‘Aunty Ethel’ but it got passed to Phyllis. She also had her poems in the Canvey News. This started when there was some disaster that she did a poem about, of what she cannot remember, she asked Fred McCave if it was any good for him and from then her poems appeared in the paper until Katie Mallet took over in the 80’s.

Kathleen Vigor, Phyllis’ mum died in 1978 at quite a good age of 83. The good sea air must have done its work! Albert her father died in 1998 at the ripe old age of 103. So Albert must be a candidate for one of the oldest people to have lived on Canvey Island.