The man behind the Councillor 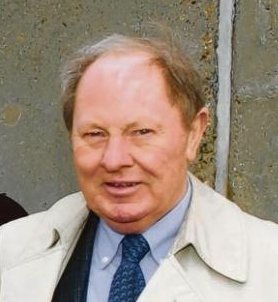 I would imagine most people reading this would have heard of “Mr Canvey” – Ray Howard, Canvey Island’s Town, Borough and County Councillor, but not many would know about Ray’s early years.

Ray’s parents, Charles and Elizabeth came to Canvey with Ray’s elder siblings in the late 30’s. They settled in a bungalow called Drake Lodge on a smallholding at the bottom of Deepwater Road which they rented from the Cockle family, raising pigs, ducks and chickens. Ray was born here during the war in 1942. 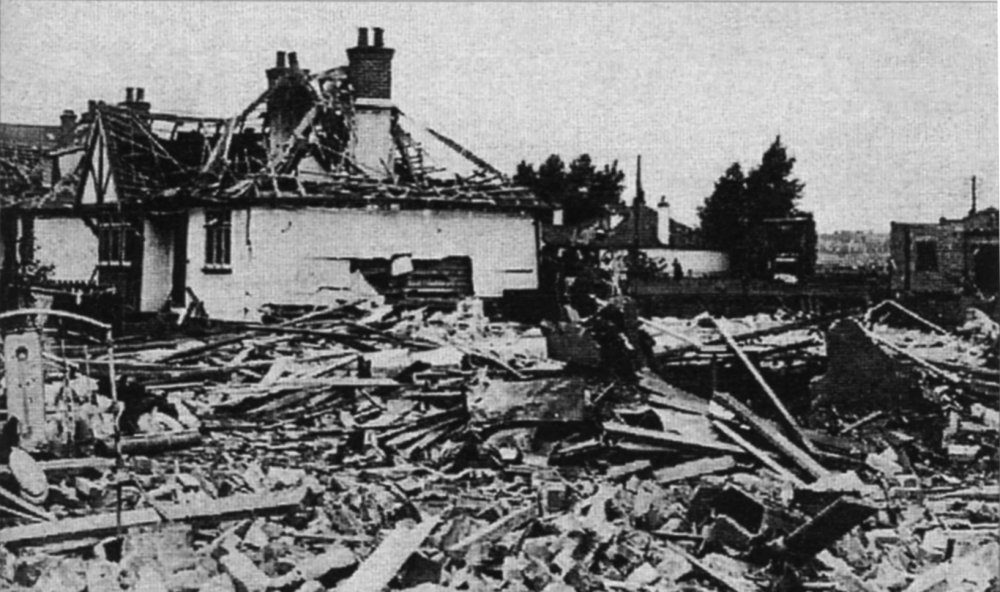 A few short years later in 1944 the Howard family were dealt a shattering blow by the war. On the 22nd July their home took a direct hit from a doodlebug killing two of Ray’s brothers, Eric who was seven and Peter just five, also their cousin Betty Brace. Their neighbour Ped Scott was also killed. Ray’s ten year old brother John had just got off the bus at the top of the road when the bomb exploded. Ray’s mother Elizabeth was buried in the rubble along with Ray and his sister Doris, Elizabeth lost the baby she was carrying. (Many thanks to Darren Howard for the information) Ray still attends hospital today to have glass shrapnel removed from his body. The family lost everything and with no insurance, as was the norm in those days, his father had to supplement their income by taking a job.

After the war the family were living in one of the Council houses North Avenue. Ray went to school at Long Road Junior School (Canvey Junior). He often stayed off school to look after the pigs so his education was badly affected. He would be found later driving a horse and cart around the island collecting pigs swill. He was at the Canvey Island Secondary School (now William Read) in 1957 until the school was transferred in the July to the then brand new Furtherwick Park School in Furtherwick Road.

As well as school and looking after the pigs Ray also had a paper round. He started when he was nine years old. He would first have to ride his bike down to the village from North Avenue. He did the Orange Cafe which was next to the papershop, Wally Brown’s Cafe (the owners were Mr & Mrs Flynn) then down Haven Road to the Lobster Smack. There he also delivered to the caravan park. He took the papers on to the ships at the Regent Oil Company. He went along to deliver in Hawkesbury Road, Deepwater Road and Jannette Avenue, Woodhurst and Elmsmere then gaps of trees until Cambridge , Southwick, then Beverly and Mayland Avenues. Then he went home before going out again to collect the pigs swill. 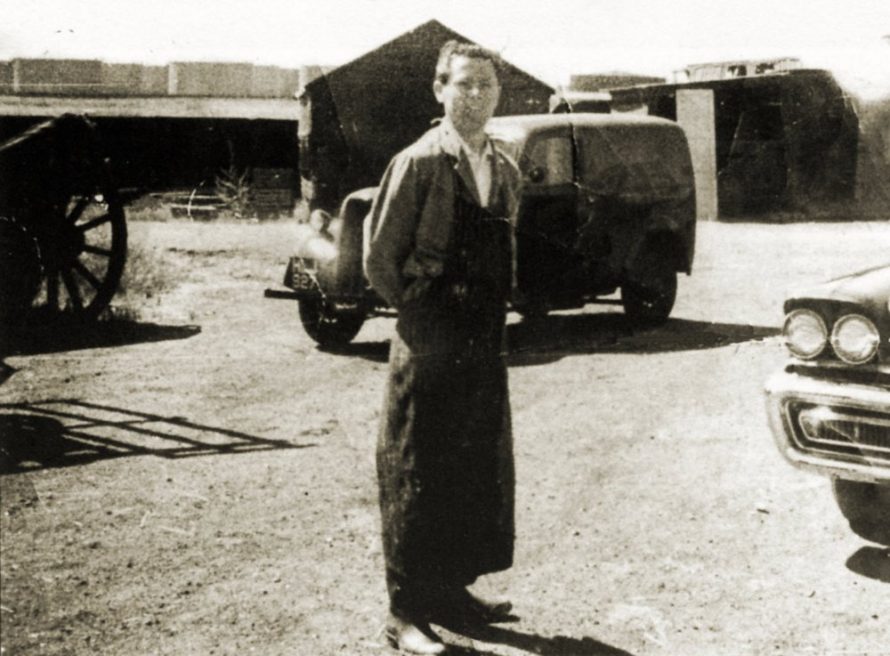 In 1953 Ray was just ten years old when once again his family were in the middle of a disaster, the floods that hit Canvey on the night of January 31st /February 1st. Ray was woken by his sister telling him of the water coming up the street. His home in North Avenue was flooded to the depth of 5ft but this time his family were one of the lucky ones as they lived in a house so had an upstairs which they could get to easily. They were eventually evacuated by the army.

Rays father bought land down Northwick Road in 1955, Ray took it over in 1961. They reared pigs and chickens they also had cattle and horses. They worked closely with Brick House Farm first with Wally Brown then Ron Nash, Ray said it was like a partnership. Ray reared the chickens for 8s 4d and sold them live for 10s to the Jewish people, transporting them in his green truck he bought in 1964 when it was new for £600. He would take 400 live chickens up to London on the A127 which was very quiet then.

Bill Cass’ house was on the corner of Northwick Road. He built it there when he sold Charfleets Farm. When Bill decided he was going to move to Shenfield, Ray bought his house and land the house was called Magnolia House. In the 6o’s the house and one opposite were demolished to build the road to the Occidental Oil Refinery site. Ray moved a short distance to where he built the house Raydele where he lives today, it was completed in 1972. 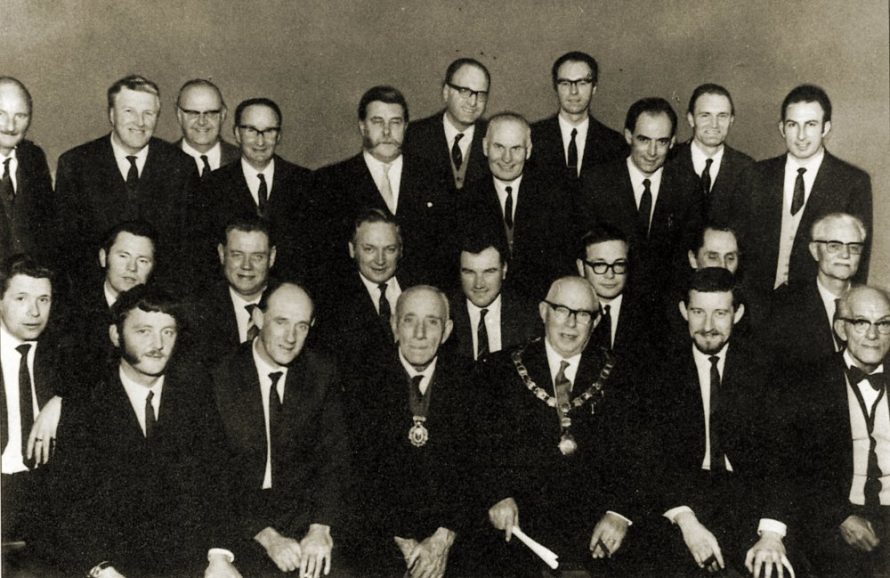 A young Councillor Ray Howard second from left in the second row. George Pickett in the middle front row.

Ray first became a Canvey Councillor for West Ward in 1968. In 1970/71 Ray was sitting on committees such as the Finance and House Purchase, Highways and Works as well as Public Health and Housing. He was also Canvey’s representative on the North Thames Gas Consultative Council, Thames Flood Barrier Conferences and the Thames Oil Refineries Sub-Committee. Ray has been our Councillor for West Canvey continuously, both on the Canvey Island Urban District Council and Castle Point Council when we were amalgamated with Benfleet and Hadleigh. 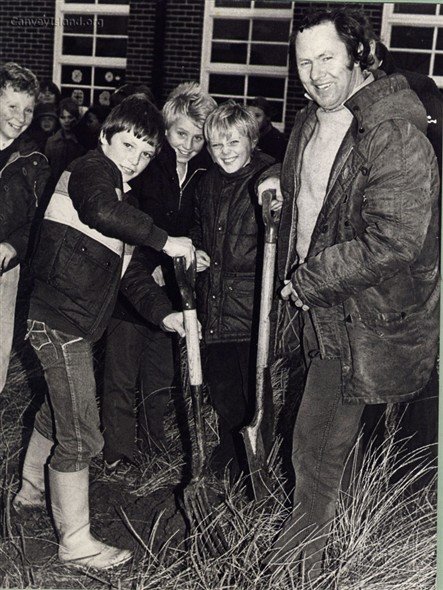 c1982. Whilst supervising the boys of Canvey Junior School preparing a hole to plant an Elm tree Ray was heard to yell “Oy! Thats no way to treat the Chairman” when a fork dug into his boot. From a report in a local paper

Ray says he owes a lot to his friend the late George Pickett who mentored him during his early years as a Councillor. George Ambrose Pickett came to Canvey about 1928 and was later to become a Councillor on the Urban District Council as well as one of our County Councillors.

Ray also become a Governor of Canvey Infants and Junior Schools and Northwick Park Primary School, recently celebrating the 40 years anniversary. As can be seen from the picture on the left he was very hands on- but watch out for the feet!

When the new Seawall was being built in the late 70s/early 80s the Labworth Cafe was saved thanks to Ray Howard. They had wanted to pull it down as it was in the way of the new wall. ‘Over my dead body’ said Ray. He was the first person invited to meet Princess Margaret in 1983 when she came to the Island to officially open the new wall and barrier.

2003 was to be a memorable year for Ray he was given the Freedom of the Borough. He had to declare this oath to the Council:

“I do solemnly and sincerely declare that I will be subject and obedient to all the good order and customs of this Borough. I shall not consent to or do anything whereby this Borough or the freedom thereof may be endangered. If I happen to know of any conspiracy or mischief against this Borough, I shall with all convenient speed disclose the same to the Mayor or the Chief Executive; and I do further declare that in all things I will conduct myself as a true and loyal freeman ought to do.”

I am not too sure what privileges this gives him but I have not seen him herding any sheep down the High Street so far.

He was also invited to represent Canvey Island at the 50th Anniversary of the floods service at Chelmsford Cathedral. ‘The Queen, who was supposed to attend the service but cancelled because of her bad knee, sent her own personal written message, which accompanied the order of service, telling how she recalled visiting the devastated areas, and witnessed scenes of havoc and destruction caused by the floods’. Instead the Royals were represented by the Earl and Countess of Wessex, Prince Edward and his wife, Sophie.

During the service, Ray Howard, who had been asked to lead the commemoration, relived his memories of the floods. He spoke from the heart as he told of how the waters gushed down the street and saw “a huge wall of water.” “The full extent of the danger was not fully recognised,” he said. He told of the rescue of his family and finished by saying: “We, the survivors, thank each and everyone who gave us back our island.” His only regret about the day of the service was that he had not been able to meet the Queen. 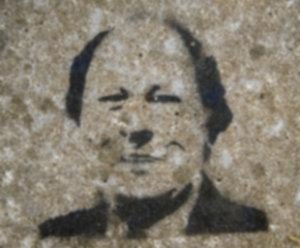 2009 saw everyone baffled when Banksy-style images of ‘Mr Canvey’ were found on the island. The pictures were found on ten paving slabs forming a path skirting Canvey Heights Country Park. As far as we know no one ever owned up to being the artist.

This is just a short biography of the life of Ray Howard ‘Mr Canvey’. I am sure there is much more that can be written as he continues his work for Canvey Island.