Quaker Oats and oil would have made quite a mess. 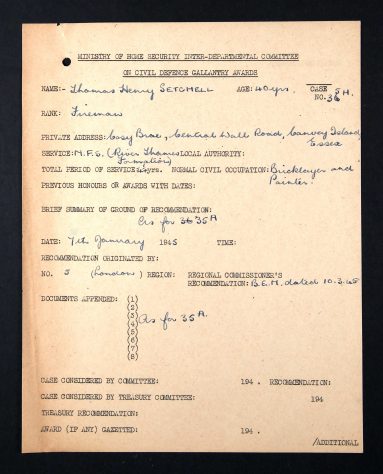 Thomas was born in Battersea in 1905 to Thomas and his wife Minnie. He married his wife Beatrice Winter in 1929. The family were still living in the Battersea, Wandsworth area in 1939. How Thomas came to be living on Canvey in 1945 we do not know. Before the war he was a plumber.  Not long after war broke out Thomas was a member of the National Fire Service (River Thames Formation) and it was in this capacity that he was awarded the BEM following an incident off Hole Haven.

The following transcription and documents tell the story. How long Thomas remained on the island we do not know but he must have been nearby as he died in Goldenley which is a care home in Thundersley in 1983.

Sunday morning, 7th January, 1945. It was fine with visibility fair, when at about 10.30 a.m. the M.V. Erinna, a Dutch vessel of 6,000 tons, laden with 8,000 tons of motor spirit, 80% octane, was pulling out into the fairway from Coryton Wharf, assisted by two tugs, preparatory to going down river, being outward bound.

At the same time, S.S. Mount Othrys, a Greek cargo boat of 6,000 tons heavily laden with Quaker Oats in cardboard boxes and bulk grain, was making up river and was passing Holehaven.

Whether there was any confusion of orders or mismanagement somewhere is not the business of this account. The fact is that while the Erinna was moving out into the fairway, the Mount Othrys collided with her. She struck the Erinna on the port side, bursting No7 port tank.

Some 350 tons of petrol gushed out or were showered by the force of the impact over the two ships and on to the water. At the same time the rending metal must have sparked sufficiently to cause the petrol to ignite. Instantly, the two ships flamed wherever petrol had fallen, and flames on the surface of the water enveloped both ships.

The cargo boat, Mount Othrys, immediately came astern on fire from bows to bridge. Many of her crew abandoned ship by jumping, diving or scrambling overboard.

On the tanker, holed and burning, all the crew except the officers abandoned ship; some used rafts, others dived into the flaming water. It happened that an officer was standing in the bows when the collision occurred.

Instantly he let go the anchor and the burning ship swung round on the ebb tide, heading upstream.

All this had happened about 250 yards from shore and about ½ mile south­west of Holehaven. The National Fire Service fire boat “Laureate” is stationed at Holehaven and the engineer, Section Leader Diplock, and some of the crew heard the collision, and, looking across the water, saw the great burst of flame. The coxswain, Section Leader Wynne, was ashore at the time. As he was called and as he was making his way to the fire boat, hose and foam branches were being laid out on the deck of the “Laureate” and the moment he was aboard she was under way to the burning ships.

This was the crucial moment of the whole happening. There were two burning ships, drifting apart. To which should the “Laureate” go?

The section leaders judged that the tanker was in the greatest danger and, moreover, offered the gravest menace to all shipping, jetties and wharves in the vicinity. Therefore it was to the Erinna that they directed their fire boat and very soon came alongside on the starboard side; that is, because a north-westerly wind was blowing, they came up to windward of the fire. . Their deck was pretty well level with that of the laden tanker.

“Lay off! You can’t save this ship!” It was the captain calling from the tanker.

Section Leader Wynne did not argue.

“Take my line! We’ve got foam here!” and he tossed a mooring line aboard. Wynne and his men, armed with foam branches, clambered on board as the fireboat was tied up. In a few moments water jetted from their branches, changing into foam and fell upon the scattered fire on the deck of the ship.

Gradually the flames were smothered, as the men worked their way across the ship, across a burning hot deck, using the break of the fo’c’sle as a screen, to the burst and burning tank on the port side. Here, too, the foam performed as it should; the confined flames were gradually blanketed and went out.

The speed and effectiveness with which this was done was due not only to the resolution of the branch operators, but also to the unflagging energy of the pump operators, who, in using nearly 600 gallons of foam solution, had rapidly to unseal and empty more than 100 5-gallon tins into the multiple jet inductor.

But the fire on the surface of the water had drifted aft and some of the flames had leaped through open portholes and fired the crew’s quarters. Two more lines of hose were laid out. Smoke, however, in the narrow alleyways of the after-castle was so thick that breathing apparatus had to be worn by the attacking firemen. The fire in the crew’s quarters was eventually dealt with though smouldering linen necessitated much turning over.

The tanker had been saved. Out of a cargo of 8,000 tons of petrol only about 350 tons had been lost; yet the captain had believed, before the National Fire Service tackled the job, that both ship and cargo had been doomed. So the tanker was towed away to Thameshaven to discharge her cargo, with a fire­boat in attendance as a precautionary measure.

At 11,04 hours on the 7th January, 1945, when in charge of the Fireboat 282 Laureate attached to B.4 Holehaven Fireboat Station, Section Leader Wynne gallantly brought his ship alongside the Motor Vessel “Erinna”, a tanker of 6,300 tons gross carrying 8,000 tons of petrol which was on fire following collision. The tanker was enveloped in flames and Wynne undeterred by the fact that all the crew of the tanker except two (The Captain and 1st Officer) had abandoned ship and the Captain ordered him to get away as the ship was beyond saving, he led his crew on board the tanker and resolutely tackled the fire at personal danger and extinguished it. By his prompt and resolute action he was the means of saving this ship and prevented what might have been a disastrous fire.

Immediately the Fireboat was underway from her moorings Section Leader Diplock, who was in charge of the engine room, went to the pump room and started up all his pumps and ordered the multiple jet inductor to be connected up, and generally supervised the engine room and pump room, seeing that there was sufficient foam solution on the after deck to ensure a plentiful supply on arrival at the Tanker. After mooring alongside the Tanker he kept the multiple jet inductor and pumps working efficiently; failure to have done this would have probably cost the lives of the crew working at the foam branches.

By strenuous efforts this Section Leader ensured that pumps, equipment and foam solution were available and kept working to the maximum. He contributed greatly to the success of the operation.

Fireman Setchell assisted to lay out the hose for the No.20 Foam Branch. After this had been completed he ran back to the fire boat, laid out more hose, and connected up a No. 10 Foam Branch, assisted by Fireman Tyte, and got to work assisting the No, 20 Foam Branch in extinguishing the fire in the wing tank. This man carried out his job very efficiently.

The promptitude and hard work displayed by this man enabled the whole team to function very efficiently.

The report of the National Fire Service, River Thames Formation, on the fires in M.V. ERINNA and S.S. MOUNT OTHRYS on 17th January, 1945 has been forwarded to me and I have read it with interest.

The promptness with which the fireboats were laid alongside is commendable and gives confidence in the state of preparedness and efficiency of the vessels concerned.

Reports I have received on the incident reveal that a high degree of courage and resolution was shown especially in F.B.282 LAUREATE which continued alongside the tanker ERINNA against the advice of the Master of that ship. This action prevented disaster and saved the Tanker. The account of subsequent events contains a record of efficiency and perseverance of a high order.

I take this opportunity of expressing my deep appreciation of the work carried out by the National Fire Service in general and would ask that it may be conveyed to the officers and men of the fireboats LAUREATE, IEANDER and TURQUOISE in particular.

Admiral of the Fleet. 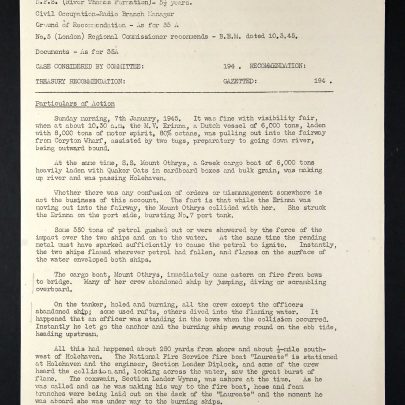 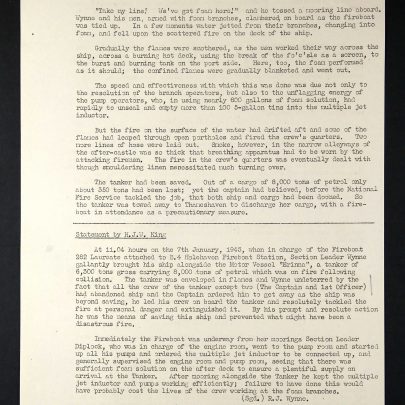 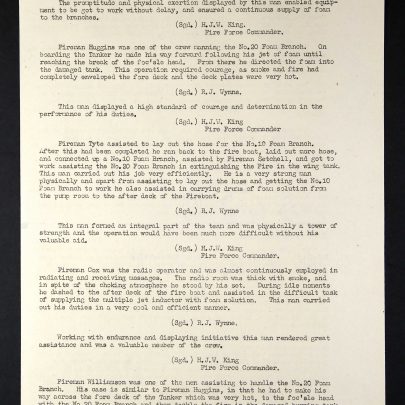 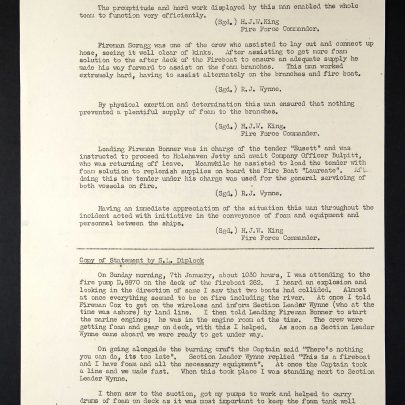 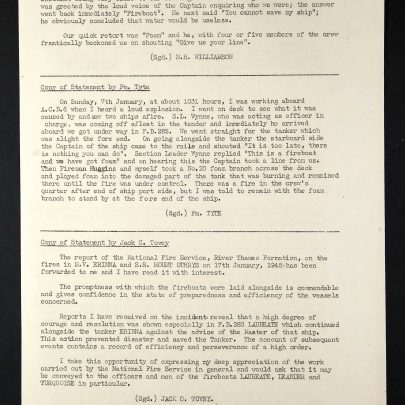