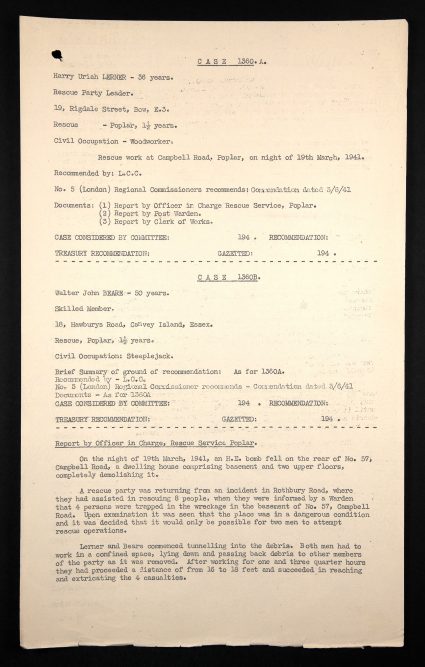 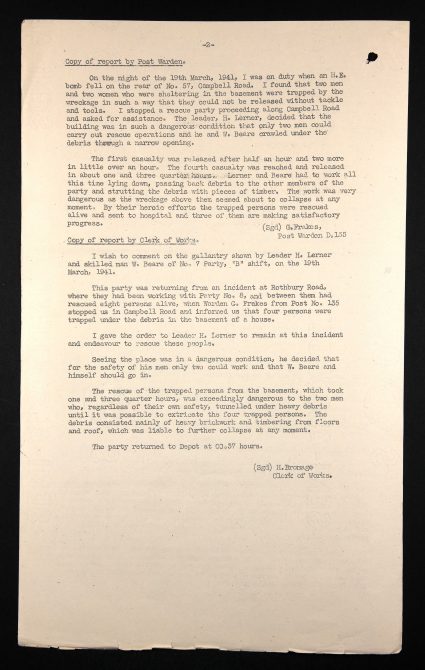 On the night of 19th March, 1941, an H.E. bomb fell on the rear of No. 57 Campbell Road, a dwelling house comprising basement and two upper floors, completely demolishing it.

A rescue party was returning from an incident in Rothbury Road, where they had assisted in rescuing 8 people, when they were informed by a Warden that 4 persons were trapped in the wreckage in the basement of No. 57, Campbell Road. Upon examination it was seen that the place was in a dangerous condition and it was decided that it would only be possible for two men to attempt rescue operations.

Lerner and Beare commenced tunnelling into the debris. Both men had to work in a confined space, lying down and passing back debris to other members of the party as it was removed. After working for one and three quarter hours they had proceeded a distance of from 16 to 18 feet and succeeded in reaching and extricating the 4 casualties.

On the night of the 19th March, 1941, I was on duty when an H.E. bomb fell on the rear of No. 57, Campbell Road. I found that two men and two women who were sheltering in the basement were trapped by the wreckage in such a way that they could not be released without tackle and tools. I stopped a rescue party proceeding along Campbell Road and asked for assistance. The leader, H. Lerner, decided that the building was in such a dangerous condition that only two men could carry out rescue operations and he and W. Beare crawled under the debris through a narrow opening.

The first casualty was released after half an hour and two more in little over an hour. The fourth casualty was reached and released in about one and three quarter, hours. Lerner and Beare had to work all this time lying down, passing back debris to the other members of the party and strutting the debris with pieces of timber. The work was very dangerous as the wreckage above them seemed about to collapse at any moment. By their heroic efforts the trapped persons were rescued alive and sent to hospital and three of .them are making satisfactory progress.

Copy of report by Clerk of Works

This party was returning from an incident at Rothbury Road, where they had been working with Party No. 8, and between them had rescued eight persons alive, when Warden G.Frakes from Post No 135 stopped us in Campbell Road and informed us that four persons were trapped under the debris in the basement of a house.

I gave the order to Leader H Lerner to remain at this incident and endeavour to rescue these people.

Seeing the place was in a dangerous condition, he decided that for the safety of his men only two could work and that W. Beare and himself should go in.

The rescue of the trapped persons from the basement, which took one and three quarter hours, was exceedingly dangerous to the two men who, regardless of their own safety, tunnelled under heavy debris until it was possible to extricate the four trapped persons. The debris consisted mainly of heavy brickwork and timbering from floors and roof, which was liable to further collapse at any moment.