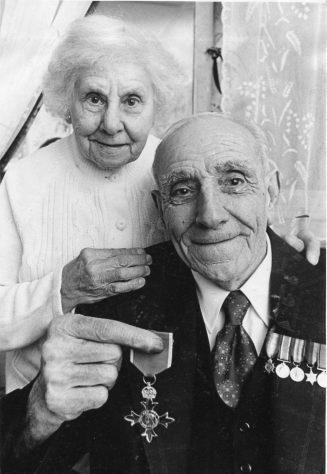 George Ambrose Pickett was born in Finsbury or Dalston in 1895 to George Ambrose and Emily Pickett one of six sons and a daughter. George Snr was born in Culcutter, India and in the records he is a horsekeeper.

George Jnr went to the Eleanor Road School in Hackney along with his younger brother Samuel. George left there in 1904. In 1911 he signed up for the Army Reserves. He was just 17 and 5’2 at that time. His home address was Tyson Street, Dalston. In 1912 he moved to the Royal Fusiliers.

George and the family were still living in Tyson Street in the 1911 census. When George married his wife Lilian Bines in Dalston in 1919 his abode was stated as Hamsterly Colliery, Low Westwood, Durham. He was a colliery electrician. By 1929 the couple and their family along with George’s twin brothers, Daniel and Henry were living at ‘Kingsclere’ in Champlain Avenue, Winter Gardens. Their eldest daughter Marjorie was born on the island in 1926 and unusually was baptised in the Convent Chapel. George was stated on the baptism entry as being a window cleaner.

The 1939 Register shows the family at ‘Ben Nevis’, Waarden Road and George as being Secretary Proprietor Social Club. He was already into local politics as a Labour member of the CIUDC of which he became the Chairman in 1939-41 and again in 1947-48.

He was involved in controversy in 1949 according to the Essex Chronicle:

An ‘eve of the poll’ sensation has been caused at Canvey Island, Essex by the resignation of newly – elected Urban District Labour Councillor G A Pickett from the party. He and Councillor A. C. Mason (Labour) signed the nomination form of Councillor H. Bridge (Conservative) who is contesting a County Council by election on May 28.

He Is NOT Dead
Extreme regret was felt on Canvey during the past few days when rumours circulated that Councillor George A Pickett, ‘father’ and former chairman of Canvey Council, was dead.

He was given the “brush off in the nicest way possible, for the committee presented him with a new broom so that Labour man George, now in his 80s, could still lend a hand with a spot of street sweeping.

Known as Mr Canvey in the later years he was honoured with a MBE. We have the picture above but not the details.

If you click on the links you will be taken to the pages we have for more details and also lots more pictures and stories.

It is with grateful thanks to the Echo Newspaper Group for the great photos we have of George.