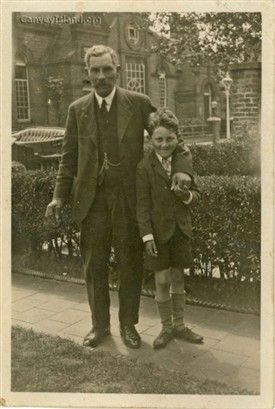 The passing of Mr Morris Hartfield at his residence Kilcreggan, Oxford Road, Leigh Beck, on Tuesday, at the advanced age of 73 years, deprives the island of one of its most active and interesting personalities.  He had played a prominent part in the public life of the locality, more especially since Canvey Island had become an urban district.  During August Mr Hartfield decided to take advantage of the cessation in the activities of the public life of the island, and with his wife, went to spend a period of rest at Margate but at the end of the month, he was taken suddenly ill with his old heart complaint.  He had confessed that he had not felt well for weeks and, with his failing eyesight, his friends at Canvey noticed that there was a gradual decline in his health, but the end was not expected so quickly.  It was about a fortnight ago that the illness was regarded as serious whilst he was still at Margate. By his own desire, and with the consent of the local doctor, he was conveyed to his home at Canvey by car on Tuesday week.  He never recovered, and a few days ago, on the advice of his medical attendant, at Canvey (Dr. T. M. Wilks), the family were summoned. Sons and daughters had been in attendance since Friday, fearing the worst, and death, followed, as stated, on Tuesday. 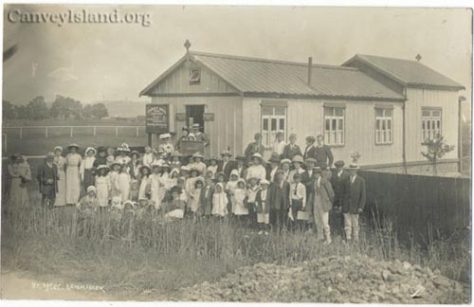 The second Canvey Hall at the Baptist Hall in Leigh Beck

The deceased, who was a retired draper by trade, was, up to 1927 in business in London, but, on retirement, he went to Canvey, where he bought up considerable areas of land and began building thereon.  He erected Samson Lodge (now the Canvey Telephone Exchange), in Oxford Road, for his own residence and, as the Island began to develop, so Mr Hartfield engaged in further land purchase and building operations, amongst his larger propositions being the provision of Canvey Hall and the building of the Terminus Hotel.  The latter premises were sold on completion to Messrs. Charrington, who on the grant of the licence two years, since, undertook to raze the then new and unoccupied premises to the ground and build a hotel in accordance with the larger requirements of the Island, the present “Admiral Jellicoe” being the result. 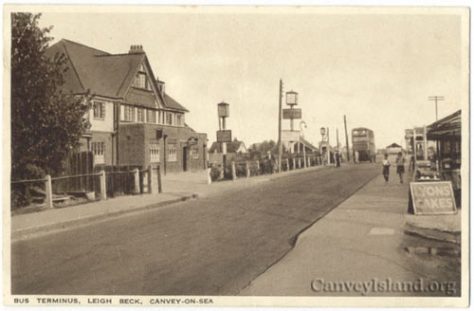 Up to the end, he was actively engaged in this class of business and only recently plans were prepared for the building of small bungalow residences in the area of the ground he owned on the south side of the Village in the Long Road, and those were about to be put into execution at the time of his death. In the early days of his residence at Canvey, he foresaw the development of the Beach area and built the Pavilion as an amusement centre there.  He was strongly urged to turn the premises into a club, but such being against his principles, he sold out and built the Canvey Hall as a social home and public hall for the people of the Island, and it enjoyed much popularity as such. 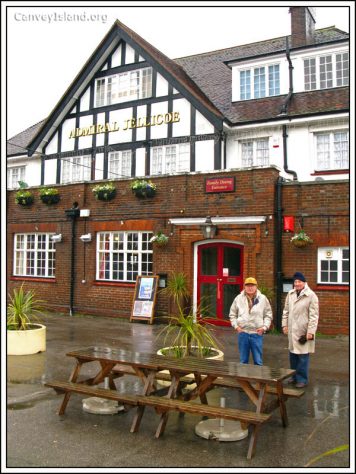 Soon after his arrival on the Island, he took an interest in the life of the place and some fifteen years ago he was elected to the Parish Council, where he retained his seat till 1925, when the district was granted urban powers. He was elected as an original member of the urban district Council (CIUDC) and was returned at every appeal to the ratepayers he subsequently made.  At the last annual meeting of the Council, his colleagues rewarded his long service to the island by appointing him Vice Chairman, an honour he very much appreciated.  He also became a member of the Canvey Island Commission, and regularly took his share in the work, making a special point of walking the walls yearly with the other members. He served the district on the old Rochford Board of Guardians and also at Orsett and Rochford, under the later conditions, whilst he was also a school manager of the Canvey Council Schools, Long Road.  A member of the Chamber of Trade and the Ratepayers’ Association, he was present at every possible meeting and gave freely of his knowledge of the district and advice he deemed valuable for its development, being actively associated with the Committee appointed to push forward the interests of the eastern end of the Island in development schemes.  Mr. Hartfeld was very outspoken and was something of the stormy petrel of the Canvey Council, and he figured in many scenes. 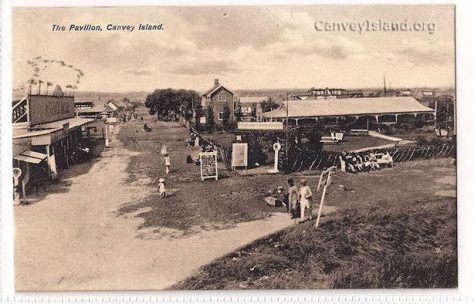 The Pavillion at the Beach end of May Ave 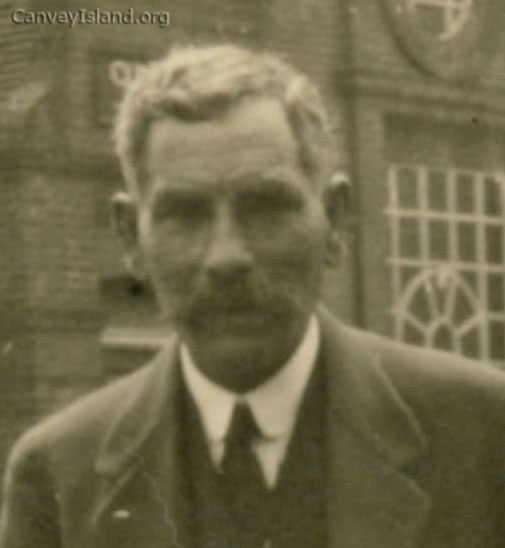 At a meeting of the Canvey Island Ratepayers’ Association, on Tuesday evening, the Chairman (Mr W. Murray) said he would with regret, say that he supposed most of those there that evening were aware that they had that day lost one of their members, Mr M. Hartfield.  He was not only a prominent member of that Association, but he was also a prominent figure in the social and civic life of the island. Beyond any doubt, he had left a big gap in the life of the Island, which it would be difficult to fill.  He asked that the members would follow the usual course and all stand in silence for two minutes of  respect to Mr. Hartfield’s memory. Mr Trader moved that a letter of sympathy from that Association be sent to the widow and family. Mr Griffiths seconded and this was carried.

The above is from a clipping [Date and name of Newspaper unidentified] that was supplied by Morris Hartfield’s grandson Monty Hartfield, and kindly transcribed by Jayne Hyde. Click below to see a scan of the original clipping. For Monty Hartfield’s memories of Canvey click HERE

Update 8th April 2008: Thanks to Maureen Buckmaster & Joan Liddiard for confirmation that Sampson Lodge/The Telephone exchange was opposite No.9 Oxford Road, probably as marked on the map below.

Update 30th May 2008: I can now confirm the ‘Canvey Hall’ mentioned was in fact the (Kynochs) Hall in Hartfield Parade. The Canvey Hall at the Baptist Church appears to be later probably after the first one changed its name.

The house ‘Kilgreggen’ was the bungalow behind ‘Hartfield Parade’, the shopping parade being built in its grounds – this can be seen in the two maps below. The entrance to the bungalow was in Oxford Road and the property had many fruit trees in the front, the bungalow standing back between Oxford & Florence Road. The property stood well into the 1960’s and may have belonged to Johnny Burton who ran the “Burtons” Tobacconist & Newsagents on the other corner of Oxford Road. This shop was demolished in the 1970’s – does anyone have a photo of it? 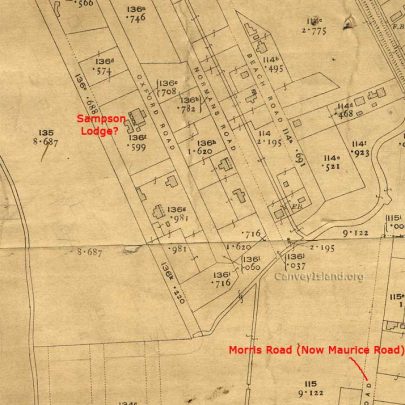 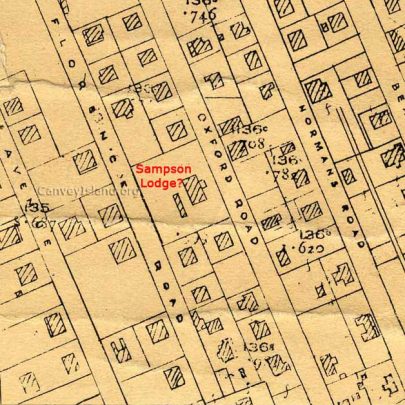 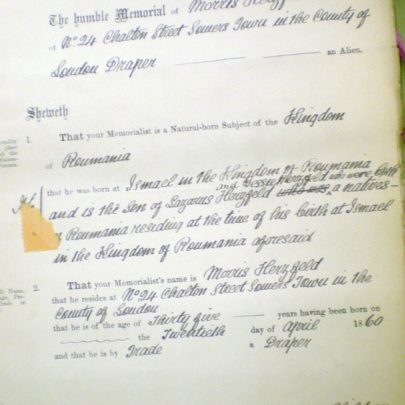