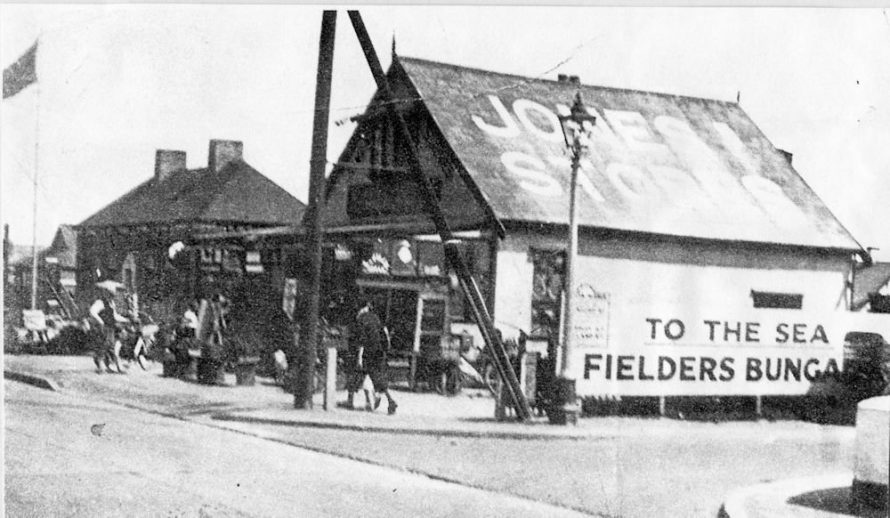 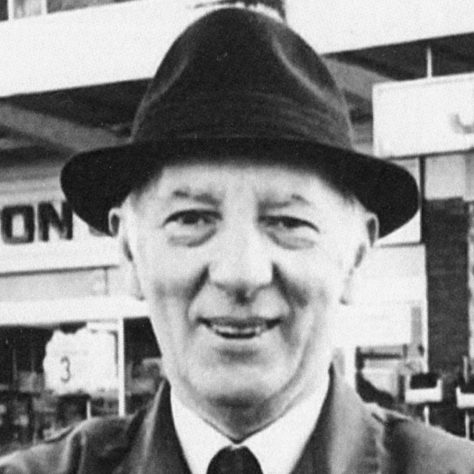 Jones’ Corner, at the junction of Craven Avenue and Long Road, has been part of the Canvey landscape for decades, after Alfred Jones had a chance meeting with an old friend on Canvey who encouraged him to sell his home in Kent and begin new life as a proprietor of a corner shop.

The Jones family was living in Gravesend, Kent. Alfred Jones had been a bank clerk before WWI but after service in the Royal Navy during the conflict he couldn’t settle down to life back in his bank.  So, turning his back on his former ‘9 to 5’ occupation, he launched a building suppliers business with two friends.  However that failed and Alfred turned to canvassing for the Daily Express. Whilst undertaking that job he was despatched to Canvey and here he bumped into an old war time pal who managed to combine the roles of local builder and RSPCA Inspector.  He suggested to Alfred that if his family came to Canvey, he would build him a shop.

Alfred’s son, Albert who was born in 1914, was approaching school leaving age and father thought that young Albert might be interested in helping to run and ultimately owning a shop. Albert had already demonstrated an enterprising spirit whilst still a young boy. Like many 10 year old lads at that time, stamp collecting was a major hobby, yet he added a money making twist to this by putting together his duplicate stamps into small packets and selling them on to his fellow pupils.

So in 1927 construction commenced and the shop threw open its doors in 1928. Location was not a chance matter. At the time the only school on the Island was William Read just a few yards away and Jones senior could see that the shop was bound to attract regular business from children and parents alike. It wasn’t a cushy berth though as young Albert was busy working from before eight in the morning to ten at night.

When he wasn’t in the shop he was out on his pushbike making deliveries.  Of course, Canvey didn’t boast much of a road network at that time and so the loaded bike had to cope with travelling down duckboards in good weather and during wet winter weather Albert would make his deliveries around the Island in a pair of waders to cope with the flooded paths. Summer brought easier work and he would also go down to the beach with a basket to sell sweets to families enjoying a day at the seaside. Evidently competition on the beach was limited, just one man from a local bakery selling buns and cakes. Albert’s efforts brought in extra cash for his shop but the local council put a stop to his coastline meanderings after two or three summer seasons. 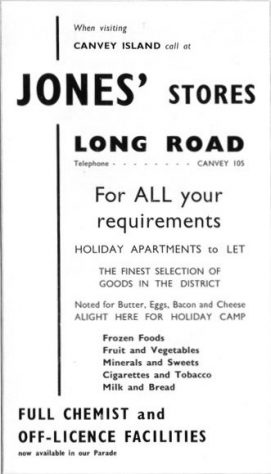 Make no mistake, in those early years the summer season was crucial to the shop’s survival. Opening close to the school obviously brought benefits but the local population was small and there were other competing shops dotted around the Island. Canvey was a popular holiday destination and in summer the population would dramatically increase. Albert later recalled that they used to sell a terrific amount of Canvey rock in those busy sunshine months.

Before the bridge was built a wet weekend would really dampen business. The shop’s suppliers would call every Monday to collect their money but if it had been a poor weekend Albert would shut up and hang out a sign that the shop was closed for the day and the traders would have to return a week later to collect. It was a case of trusting to luck that the sun would shine before they did.

Those three key summer months would effectively pay for all the bills such as rates and utilities because in the winter months trade could be very quiet.

The outbreak of WWII in 1939 totally changed the business profile of the shop.  Because it was a defence area, tourism to the Island wasn’t allowed but significant numbers of troops were posted to the Island which helped and of course the local population had to register for food supplies. While the number of customers was smaller, trade was regular. The shop also looked after a stock of food, on behalf of the Ministry of Food, which was held in case of invasion by German forces.

Albert was in the Auxiliary Fire Service for the first couple of years during the war but in 1941 he was called up for the Royal Navy.  His sister, Phyllis, ran the shop whilst he was away but, unlike his father, when Albert came back from the war in 1946 he was happy to settle back into his former way of life. During the immediate post war years the business was relatively quiet.  Holiday makers returned to the Island but Albert recalls their numbers dropped off in the ‘fifties although an increasing population shifted the customer profile and so trade was steady all year round rather than being dependent upon the summer months. 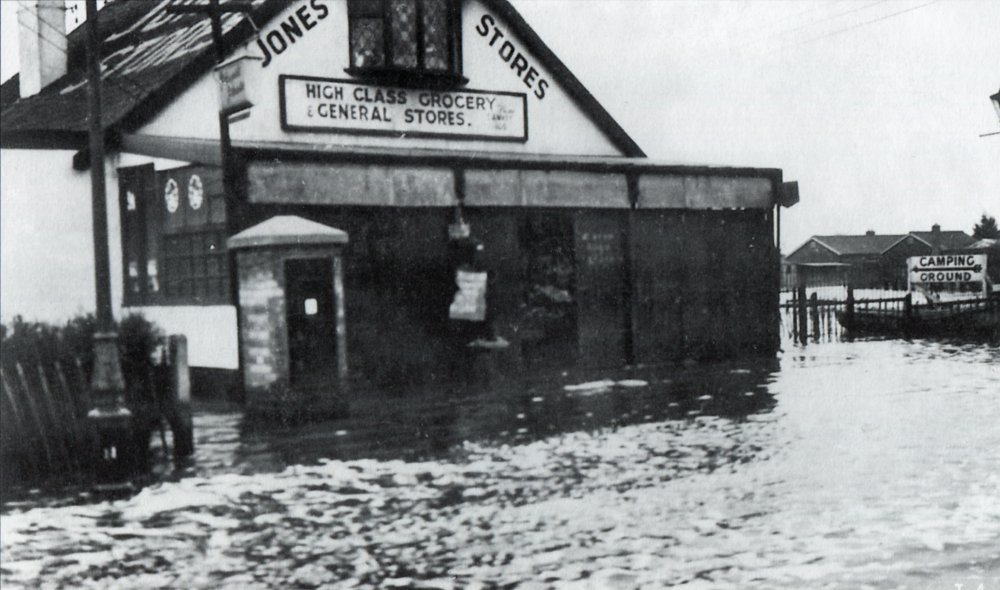 Shop during the floods

The flood of ’53 naturally disrupted the business but the flood waters around the premises were not much more than 18 inches high and so the structure fared much better than many. The first they knew of the breach in the sea wall was the siren sounding at the nearby fire station. They didn’t think of a flood but became aware of an increasing level of noise outside and when they rose from their beds they could see that the Island was flooding and water was approaching. They barricaded the shop as best they could with bags of potatoes and sacks filled with earth which they dug out of the garden in the middle of the night.  By morning the shop was surrounded by water, the inside held reasonably dry but the storeroom was flooded. Trade couldn’t carry on as normal but some customers paddled around to the back door and the Jones family did their best to meet their needs. Fresh supplies of milk and bread came in every day, initially transported by army lorries when the flood was at its worst. Once the water had subsided it was time to repair the damage and dump a significant amount of spoilt stock. Members of The Southend Grocers’ Association rallied round and gave Albert a hand sort the business out and he did receive some compensation for the damage. 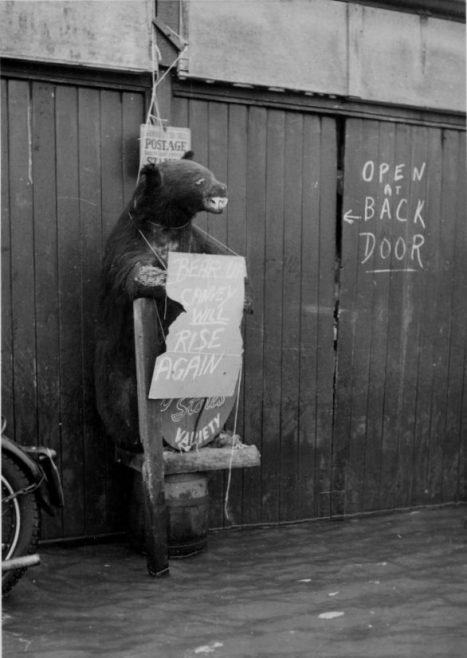 The late ‘fifties and early ‘sixties brought steady progress and Albert realised that the existing premises were no longer sufficient so he applied for planning permission to build a supermarket and rebuild the shop. Work started in 1966.  Initially Albert constructed a shop on the other side of the road where a couple of old bungalows had stood. The business temporarily moved across to there before moving back to the brand new supermarket.

The new format continued to prosper as “Canvey grew beyond all our hopes” and Jones’ Stores continued to trade until the early eighties when Albert, who had no children, retired from the business to continue with his life long hobby of stamp collecting.