The Canvey Supply Company - nearly a century of family business

John Lawrence, son of the founder, looks back 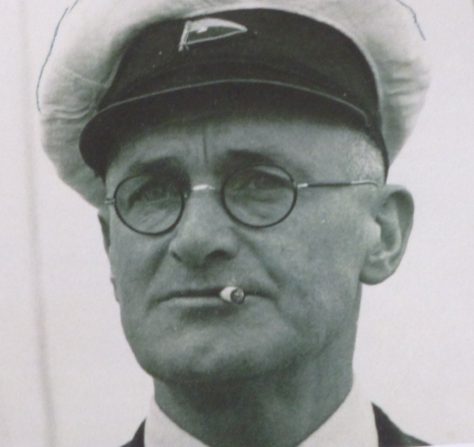 Canvey Island has been home to many a family business over the years but few can match the longevity of The Canvey Supply Company which was founded by Eugene Ernest Lawrence in 1919, just after the First World War.  Today the family, headed by Eugene’s eldest son John, is still very much in day to day control of the building materials business which has been supplying much of the fabric for the Island’s development for almost a century.

It was actually an encounter with a member from one of the Island’s well known families, the Fielder family, during WW1 that brought Lawrence from his north London home to Canvey.  Eugene, who was born in 1894, was a draftsman during the war working for the Ministry of War and designing submarine pens for the Royal Navy at Chatham. The man sitting next to him was William Fielder, brother of Lt. Col. Horace Fielder.  They became firm friends and it proved to be the beginning of a family relationship which endured many decades.  Indeed, in the early days, William Fielder was a director of the company along with a member of Hartfield family, another established Canvey family of the time.

Initially Eugene Lawrence was building ‘classic’ Canvey bungalows of the period with corrugated roofs but it wasn’t long before he moved into supplying materials to other builders including the Fielder family who were developing the area between Long Road and ThorneyBay which they had purchased from A M Clark.  The original site was in the High Street where part of the business still stands today. 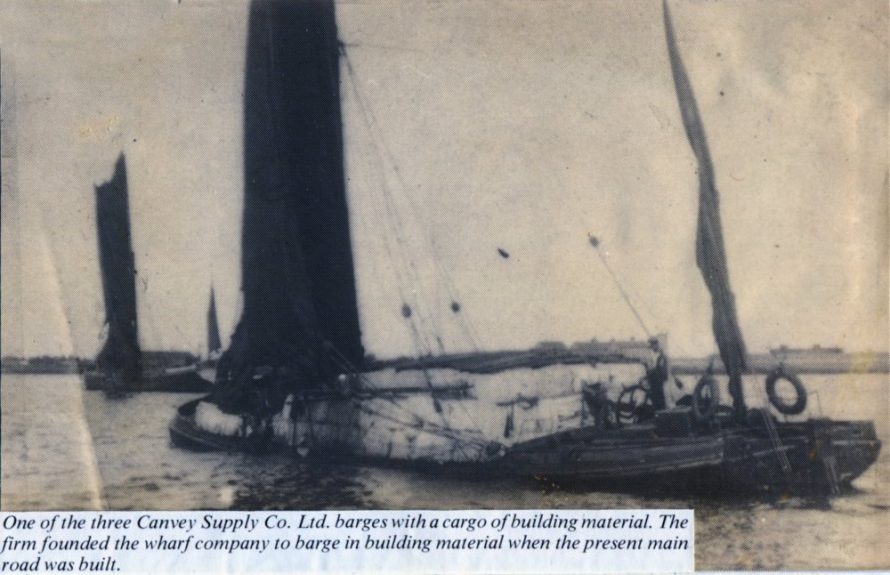 John Lawrence tells how a significant development for the business was when his father was given the opportunity to quote for materials to build undertake a major road building programme on Canvey in 1928 that included lowering the High Street to ground level.  It involved bringing in ballast, cement, aggregates etc. and it was at that stage that his father constructed the wharf alongside the current site at the Point and put in a private narrow gauge rail track, known as the Jubilee Track, to move materials.  The company owned three Thames Barges at that stage including the ‘Kate’ and the ‘Garland’.  Whilst some goods could be offloaded by crane, moving bulky ballast from the barges at the company wharf was done by gangs of men with shovels.  John recalls how his father also used to get his brothers down to the Island to help unload bags of cement. 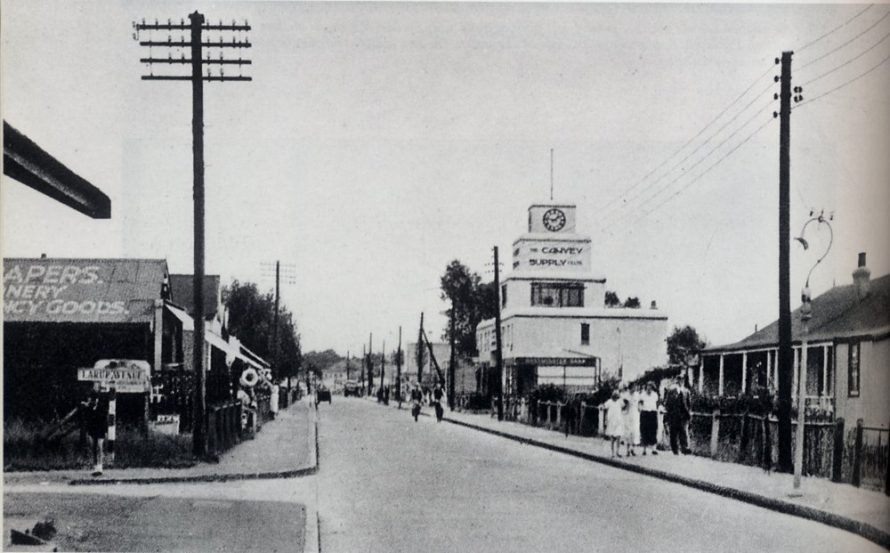 Postcard of the Canvey Supply Co showing the clock tower

Lawrence senior was still employing his architectural skills.  He designed the bus garage, now the museum, in Point Road, the Casino on the sea front and, in 1934, new premises for Canvey Supply in the High Street.  The new building included the iconic, land mark clock tower that could be seen across the Island and beyond.  In 1940, with the threat of an enemy invasion, the Canvey name on the tower had to be boarded over, as part of the Government’s efforts to remove and signs that could be of use to guide invading troops.  The tower was eventually removed in 1967. 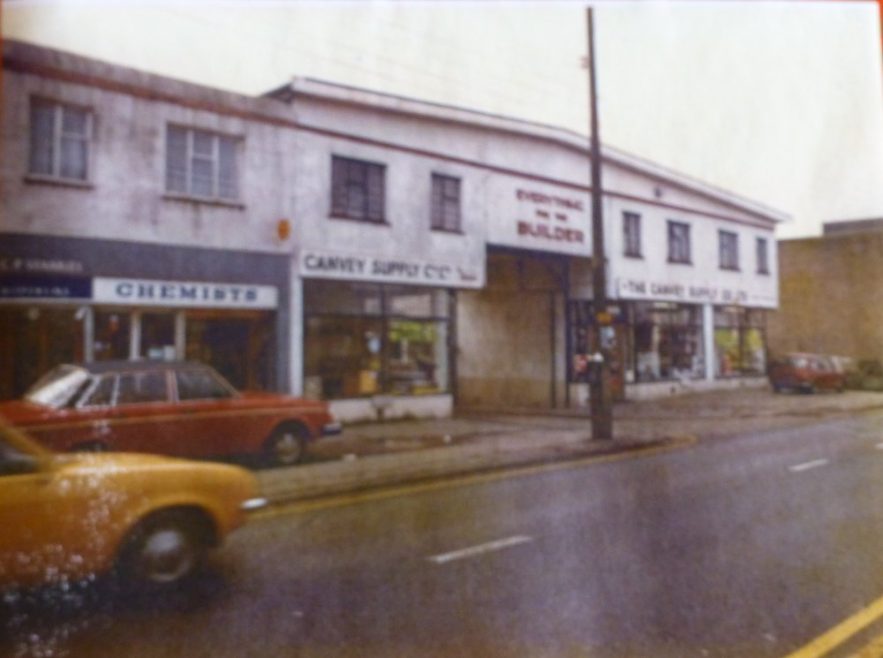 After the clock tower was removed c1970s

Eugene’s wife, Irene, gave birth to John in 1927 and his brother Tom in 1933.  During the early days on the Island the family used to move home quite regularly.  John says, “Once a place my father was building got anywhere near habitable we used to move in.”  They would then move on to the next partially built property in order that their last ‘home’ could be sold to a customer.

The family eventually gave up its nomadic life and settled in a mock Tudor house in Long Road, a little way down from Haystack Corner.  They called the house Welbeck, a reference to Welbeck Street where there had been a family home in London.  The relationship between Lawrence and Fielder families was continuous and the Fielders lived close by in a similar house opposite the site of the Conservative Club. Later John became one of the trustees of the Fielder estate; there were two trusts, one for employees and a charitable one which, for example, donated substantial sums to Southend Hospital and Canvey’s War Memorial Hall.

After attending infant schools on the Island, John was sent to a boarding school in Brentwood at the age of seven.  He later went to another boarding school before returning to day school at Clark’s College in Southend.  He didn’t see much of Canvey except at holidays but nevertheless he has memories of the carnivals in particular. “It was very primitive. The children used to dress up in sheets and pretend to be arabs. It was great fun though.  I remember walking down Furtherwick Road to the sea front.  It was far more humble in those days with a track and ditches each side.  Up by the front would be stalls selling ice cream, funny hats and that sort of stuff.  I was always trying to get ice creams and wafers off people.” 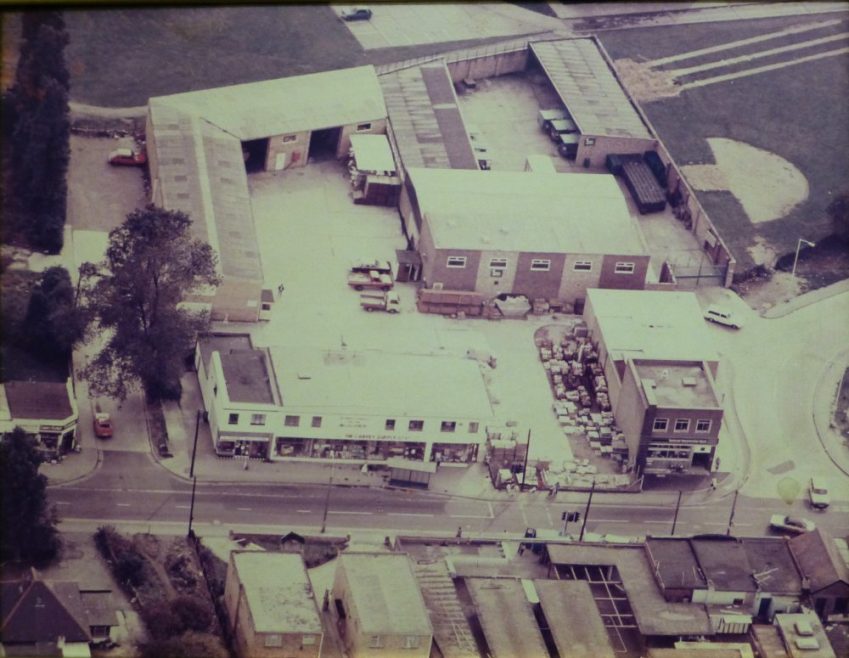 Aerial view of the branch in Canvey High Street 1980s

With the advent of the Second World War, the company became involved in making concrete Anderson type shelters and with construction work on army installations at Shoeburyness.  John was called up into the army but returned to the business after the war.  Younger brother Tom did his national service but he too was straight back to the business afterwards.  There was no sitting in the office.  “We were very hands on in those days” recalls John, “we were driving rollers and the like.  At one time there were only three people in the yard; one on the saw mill, a driver and me.  There simply wasn’t any business after the war.  You couldn’t get anything because of licensing.   You would almost need a licence for a nail.  There was timber rationing and a bloke would come in with a bit of paper for a pathetic order for a piece of wood.  There were only four permissions a year from the council to build a home.  It was very quiet apart from a bit of repair and altering going on.”

Of course in the wake of the 1953 flood building material was needed for repairs.  Although after that disaster no building society would touch the Island for some years, the Small Dwellings Acquisition legislation enables people to get council backed mortgages and that got things going according to John.  Also, The Lord Mayor of London’s Relief Fund provided finance to put in cinder roads on the Island.  Canvey Supply started to prosper again. 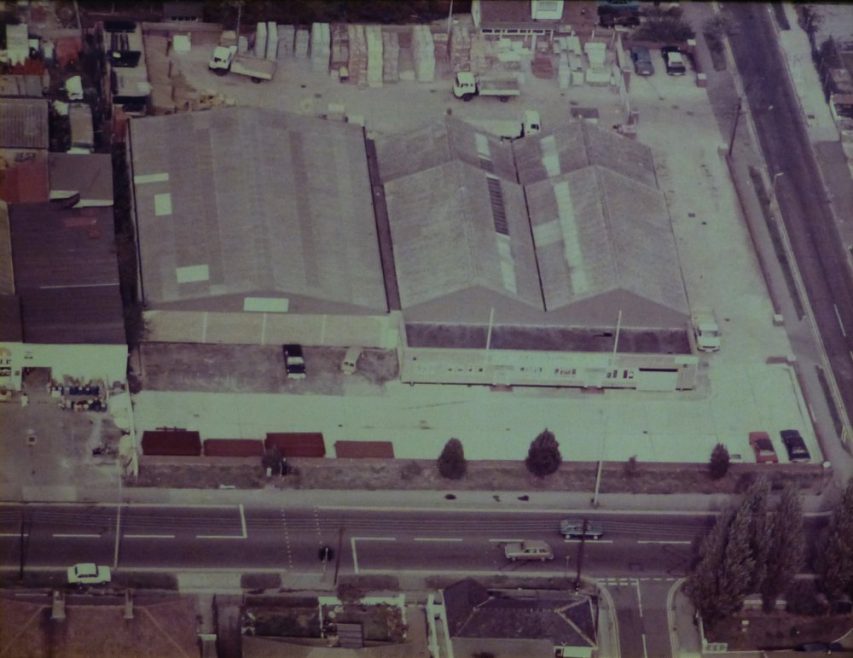 In 1975 John and Tom expanded beyond the Island.  “We saw an advertisement in a newspaper for a site near the Manor Trading Estate and bought that.  Then, in 1980, we saw an opportunity to buy an old brewery site on London Road and we shifted there, selling on the earlier Benfleet site.”

Naturally it wasn’t work all the time and the family developed a keen interest in yachts.  The local yacht club had started life in 1936 and Eugene was an early member.  He bought a vessel from the Royal Navy in the mid 1930s and when building work was slack he would get his carpenters across to the boat to do some work, turning it into quite a comfortable yacht.  He also purchased some land from the waterworks company, selling part of it on to the Club for its use.  John and Tom followed in their father’s footsteps and both had their own boats regularly going across to the Continent.

The family has also made its mark in supporting both local and national charities and good causes over the years but John likes to keep that aspect low profile. “We think we have been lucky and so we help out a bit but it isn’t in good taste to shout about it.” 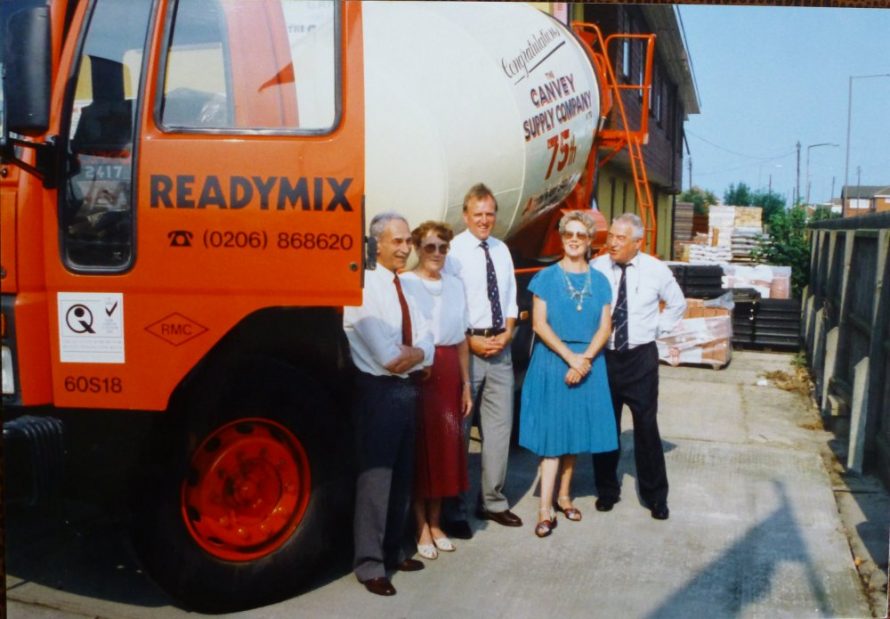 The family celebrating the 75th Anniversary in 1994

Eugene Lawrence remained at the helm of Canvey supply until 1968 when he was diagnosed with cancer, he died in 1970.  John, his wife Vera who he married in 1955. and Tom were already fully committed to the business and they took over managing the company in 1968.   Both Tom and Vera have since passed away but John is still in his office, overlooking the 4 acre yard at the Point, and running the business with the next generation, Tom’s two daughters, Sarah and Jane.

However, the outlook isn’t particularly buoyant in the current environment.  At its peak Canvey Supply was employing 100 people, today there are just 50.  The Benfleet operation is sound but it is tougher for the Canvey based business.  John believes that while there is space for more building activity, limited access to the Island restricts development.  The company will have to adjust and now has planning permission to build some houses on its founding site. 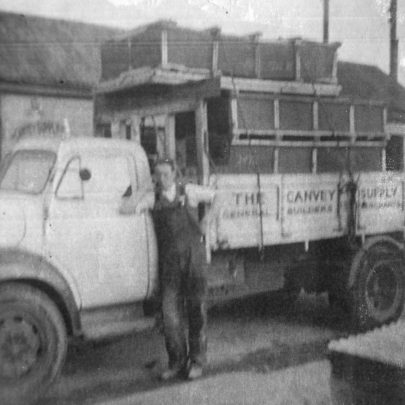 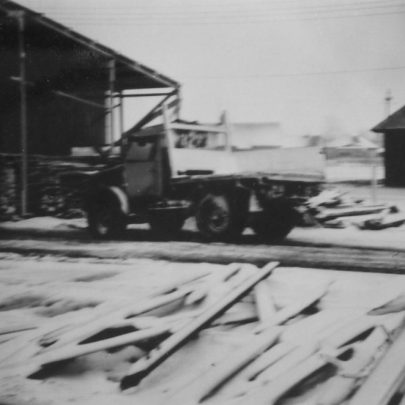 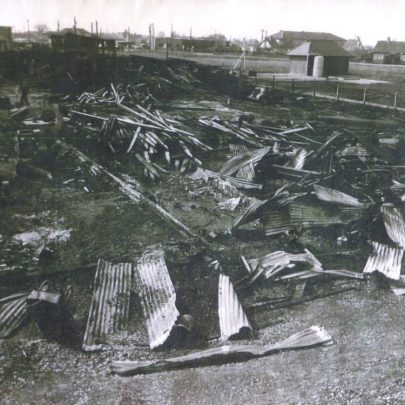 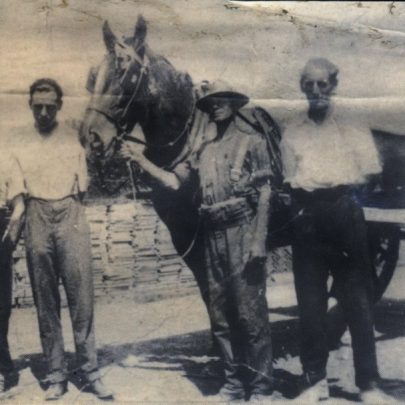 Taffy Evans (at the horses head) with his famous cart. Fellow workers are with him. He used to take the loaded vehicle round the unmade street when trade was slack to drum up business - stop me and buy some! 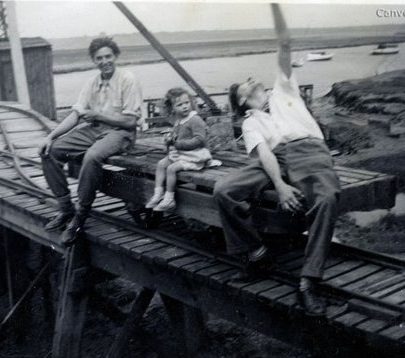 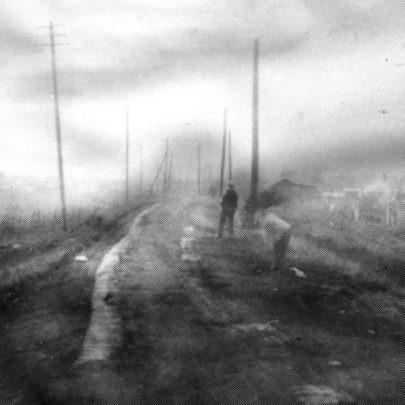 Point Road from the wharf 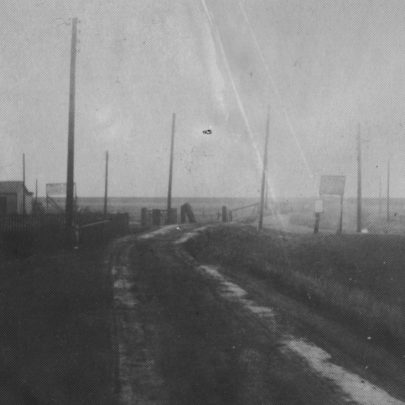 Entrance to wharf with the admin building on the left 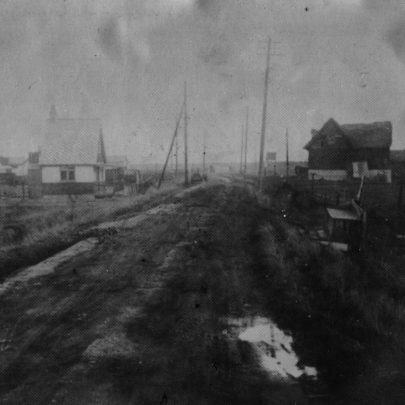 Claydon's Barn right (legend has it that gunpowder was stored there in the days when a visit from the Spanish Armada was expected. They like the Germans centuries later failed to make it) 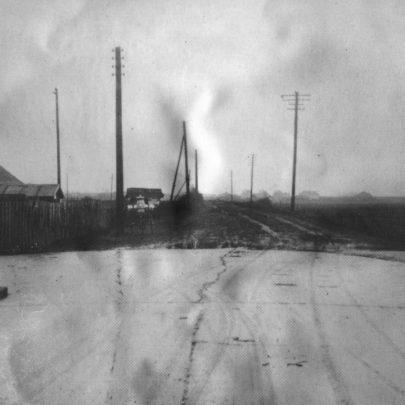 End of the High Street before the rest of the road was surfaced. Then it finished just by the Admiral Jellicoe. Concrete road strips on the unmade road put in by the firm. 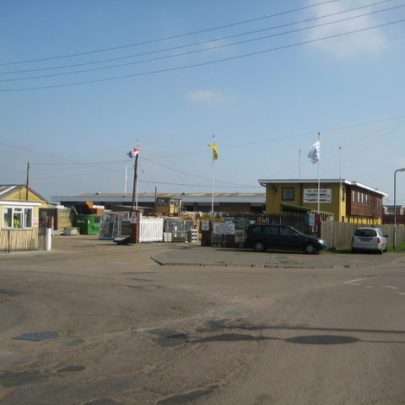 Entrance to the depot at the point 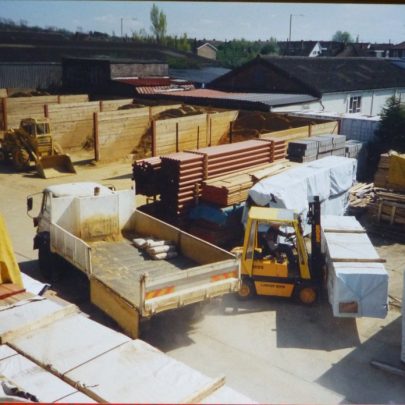 A more modern picture of the Yard
©Lawrence Family 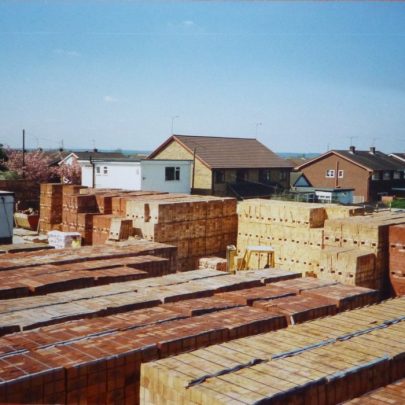