Duck-pond experiment sent canoes all over the world. 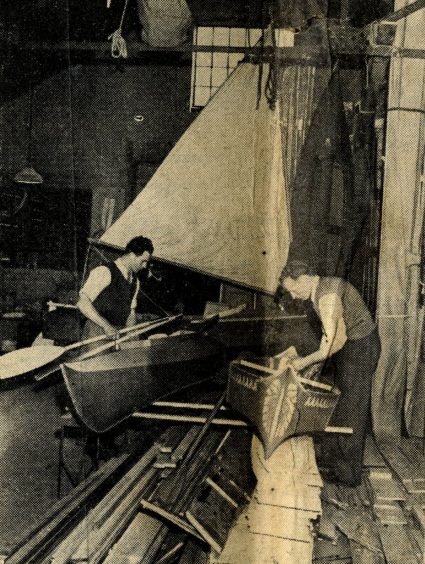 Putting the finishing touches to the youths’ Redskin canoe and the standard two-seater. Recently four dinghies, similar to the one in the background, were sent to Warsaw.

A crowd of derisive youths who, one day back in 1935, mockingly watched the trials of a collapsible canvas boat on a Hadleigh duck-pond would probably have been more interested than amused had they known how successful these little craft were going to prove and how, despite many obstacles and set-backs, their designers were going to blaze their name in the yachting world.

For since those early days of 1935, the experi­menters, Messrs. Geoffrey Prout and Sons, now of Small Gains, Canvey Island, have made the name of Titcraft folding dinghies and canoes known all over the world, and developed a most interesting and remunerative industry.
Originally, these small craft were built for their own pleasure and enjoyment, but so many people were interested in them that they decided to make them pro­fessionally. Since their first appearance on the market, they have always commanded a good sale—from yachtsmen, anglers and many people who wanted a lightweight, portable craft to use on their holidays. 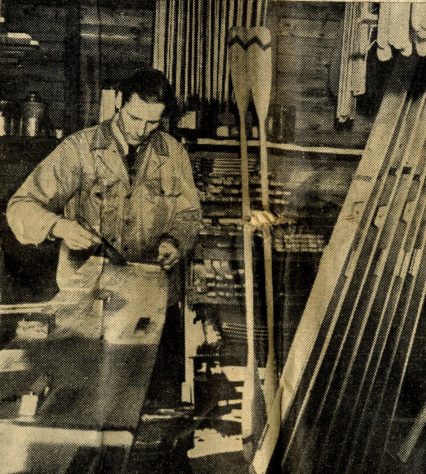 Applying clear varnish to parts of the framework of a sailing dinghy is Mr Tom Joyce.

Their portability is one of the main features of Titcraft boats. Several of them, when folded, can be carried on top of a small car; the canoes fold to a width of two inches and the dinghies to only three inches. People living some distance from the sea favour these craft because they can be easily carried— folded or otherwise—several hundred yards.

Another advantage of these portable craft is that a person, with experience, can easily fold one, ready for trans­portation, in under 20 seconds. It only takes a minute to re­verse the operation and assemble a Titcraft ready for use.

To facilitate assembly and to ensure that, when the inex­perienced make a portable boat ready for sea, the right piece fits into the right place, the thwarts and other detachable parts are alphabetically marked to correspond with another letter in the main structure. 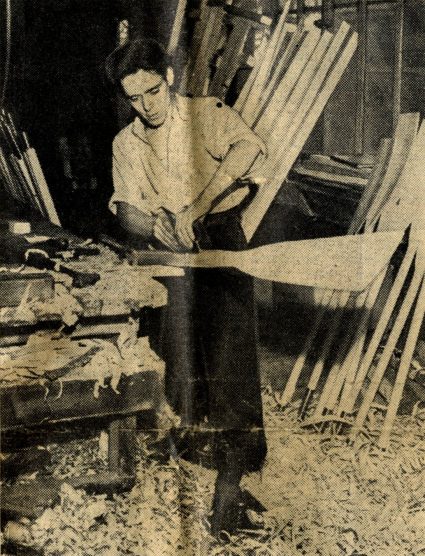 Shaping oar handles is Mr Bob Rook’s contribution in the factory at Canvey.

The directors of Titcraft Works are Messrs. Geoffrey, Roland and Francis Prout, all ex-Service men. During the war, when the Canvey works was closed, Mr. Geoffrey Prout (father of the other two partners) was in the Water-borne Section of the R.A.S.C., and his sons were in the R.A.F. The Titcraft Works were re­ opened in 1946, when the partners were demobilised, and one of the first orders was for a score of collapsible boats for a South African firm.

Although the first few of the boats made at Canvey in pre-war days were sold to local people, Prout and Sons saw the possibilities of these craft becoming widely known, and began to advertise them.

One of the first to be sold this way was to the Scott Polar Re­search Institute at Cambridge University. It was carried on pack-pony across the wilds of Iceland on an expedition to collect scientific data.

Soon after, the Maharaja of Tranavcore ordered one to be sent to India for his personal use, and a Rhodesian doctor called at the Canvey Works, tested a model in the sea and ordered three for scientific work in Rhodesia on behalf of the Rhodesian Government. A Royal Navy officer bought one for use in Hong Kong. He said it was the only boat which could easily be taken in and out of a submarine! 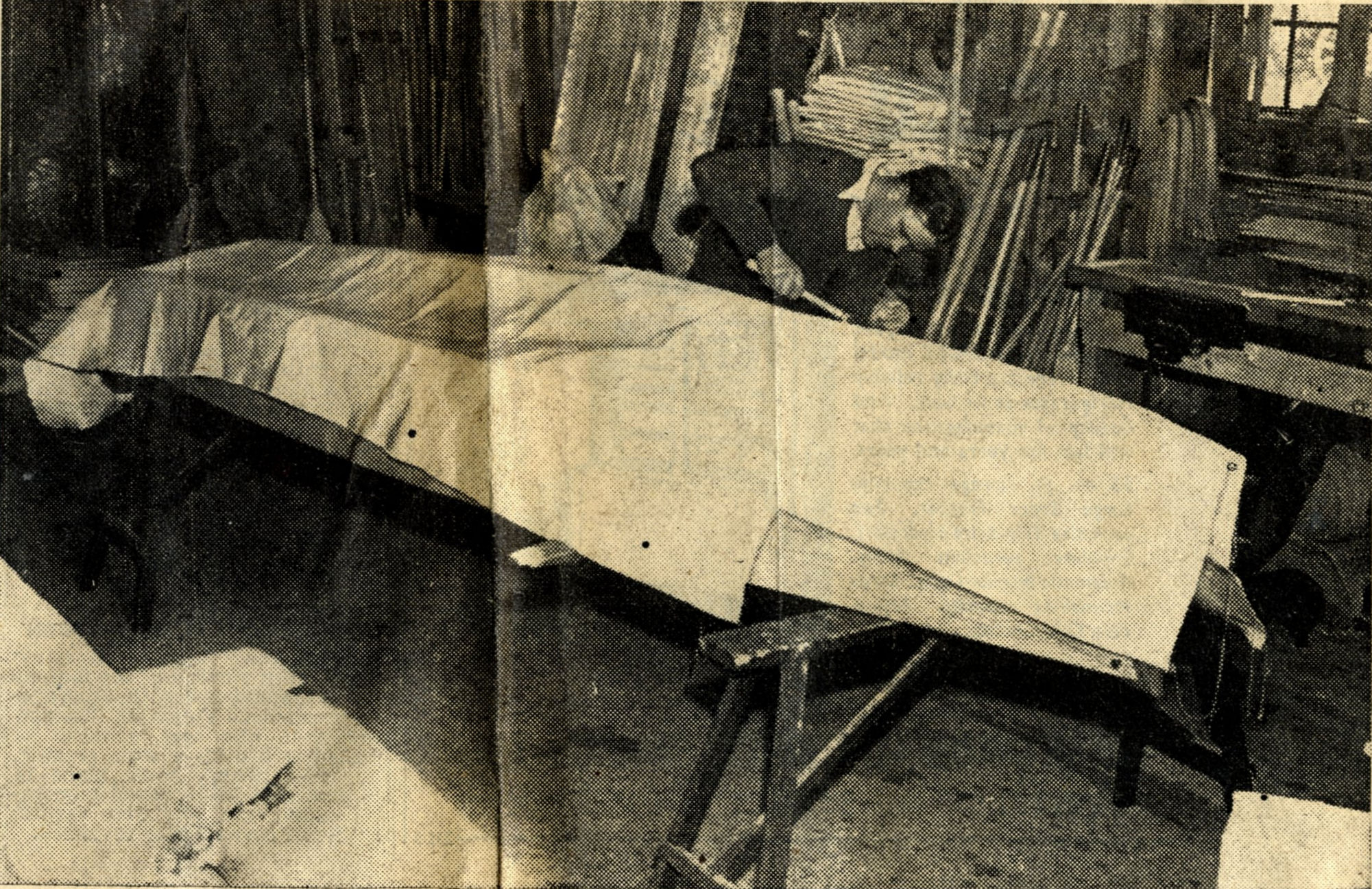 Mr Roland Prout covers a dinghy with canvas. These craft, with strengthened sterns, can be fitted with outboard motors.

Since then, a considerable trade has been built up in the dollar area for the sale of Tit­craft boats, and. in addition, they have been sold in Zurich, Berne, Geneva, Channel Islands, South Africa, Southern Rhodesia, Kenya, Nigeria, India, Eire, Barbados, Trini­dad, Mauritius, New Zealand, Greece, Germany, Canada and many other places overseas.

Messrs. Prout design all their own boats. They started from scratch in pre-­war days, and have never copied other manufacturers’ models; they are proud that all their designs are original. 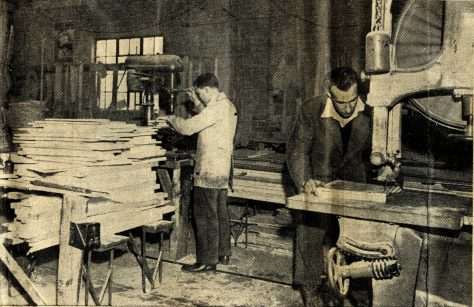 Busy cutting out shapes on the bandsaws, first stage in the boat-building operations, is Mr Ronald Greig.

A great deal of experiment­ing is necessary when building new designs in portable boats, and because the firm is so swamped with orders, experi­mental trials are delayed until either an off-peak period or until a temporary shortage of materials cause a hold-up.

In the course of experiment­ing with their craft, the three Prouts have canoed every mile of English coastline between Plymouth, Devon and King’s Lynn, Norfolk, sometimes in very stormy seas.

Last year, between 400 and 500 portable boats were built at this Canvey Works; this year the directors hope to pass that figure. The chief workshop in which these craft are built was formerly the garage of the Canvey and Benfleet Bus Com­pany, and, although barns and outhouses surrounding it have been utilised as workshops and storehouses, there is insufficient space for the expanding in­dustry, and the firm propose shortly to acquire larger premises elsewhere on the Island. 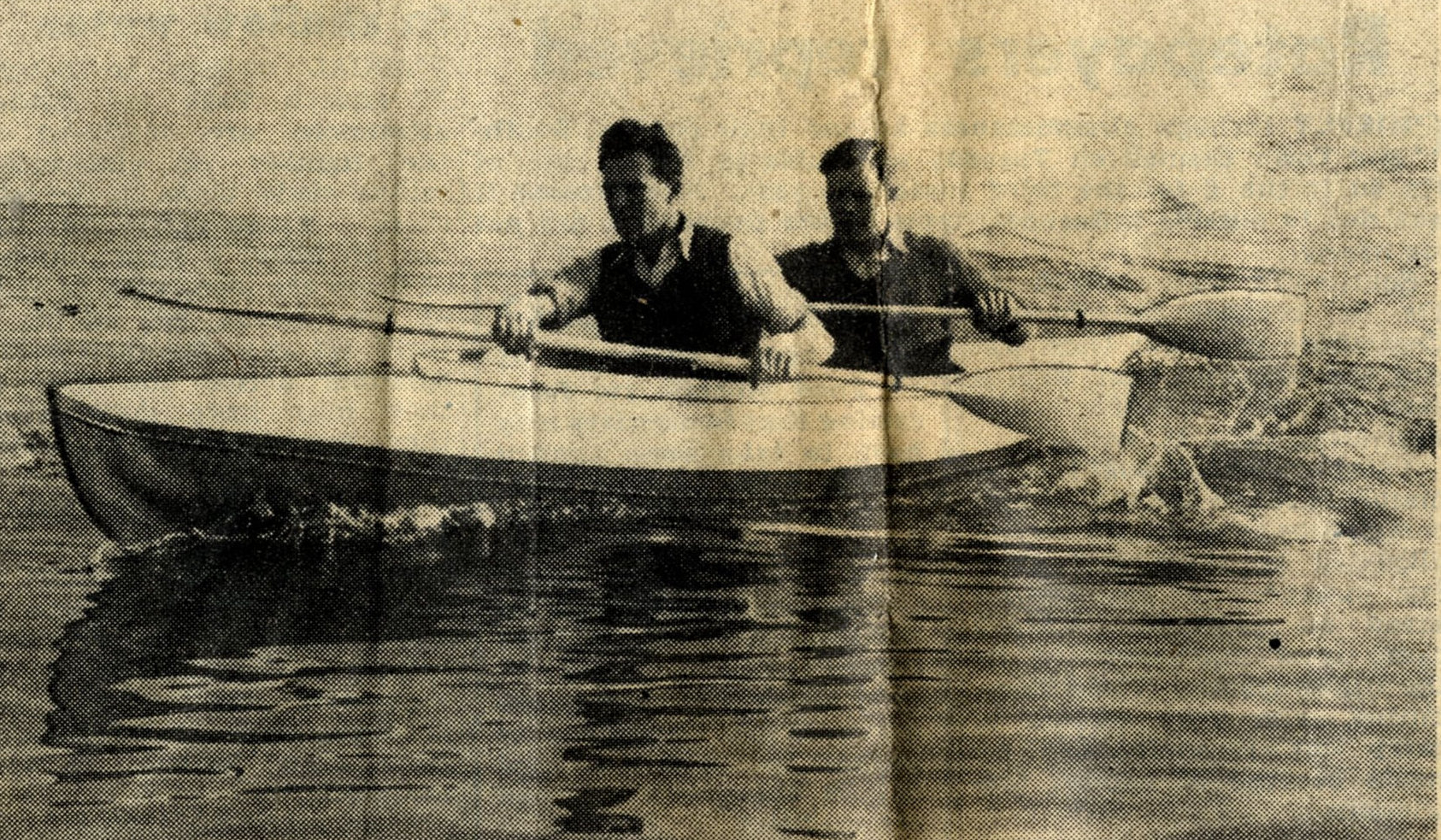 The Prout brothers put a two-seater canoe through it’s paces on the Thames off Canvey.

Wood mainly used in the construction of the frame­work of these portable boats is silver spruce. It is the strongest soft wood for its weight, and is much in demand by boat builders. Parana pinewood is used for the bottom boards.

The timbers are cut out on a band saw, shaped and sand­papered on a home-made sand­papering machine. After varnishing, the framework is fitted together and the canvas covering is stretched by hand to cover it.

The canvas is then “tacked,” sewn and painted with a special waterproof compound which allows the canvas to be pliable and yet retain its water-. proof qualities.

All the materials used in Titcraft boats are made on the Canvey premises, except very small components of copper and brass and the iron row-locks.