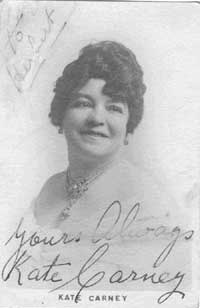 Kate Carney was a famous singer and comedian who played the music halls in London. She was born Catherine Mary Pattison and her birth was registered, September quarter 1869 in the Newington District of Surrey. She first appeared as Kate Carney at the Albert Music Hall in Canning Town, singing Irish songs and became known as the ‘Coster Comedienne’. She appeared in the Royal Variety Performance in 1935. Following the death of her husband George Barclay, she became the lessee of the Grand Theatre, Clapham Junction.  Kate married her husband in Southwark, registered December quarter 1886. They married as Catherine Mary Pattinson and George Shea. They appear with this same name in the 1891 census with two of their children George and Richard. By the 1901 census they have changed their name to Barclay and they appear with three more children William, Harry and Kate. George is described as a Commission agent.

Kate Carney was a frequent visitor to Canvey Island. She was a friend of Madam French (Selina French) who along with Henry Dellaway ran the Haystack Public House and Kate would stay with her there. According to Iris White and Mary Dallas she was very involved with the social aspect of Canvey life when she stayed.  Did she perform her songs at any of the venues? If anyone knows please put a comment below. Can anyone tell us about Madam French?