You are here: HomenextHistorynextOld CanveynextStoriesnextWreck(Rack) Hall Farm and the Morley family

What or who is the connection between Canvey Island and Stoke Newington, North London?

As an ‘incomer’ to Canvey I knew little about the Island’s history or the many varied ancestry of it’s residents, both passed and present. So I set about reading and learning finding many surprises. After three decades and with four generations of my family having lived here, I think I can be forgiven for thinking I am no longer an ‘incomer’. Using skills learnt from family history, I plotted the family histories of many of the old Canvey families and was surprised when one such family had connections to my birthplace, Stoke Newington, London. This is the story of the Morley family and the connections I found with my own family although many years apart. 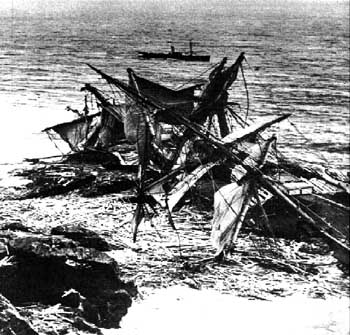 Wreck Hall was situated on the eastern side of Canvey in the Southchurch Parish of Canvey, close to Odessa Road, where the dyke runs down the eastern boundary of King George’s playing fields. The farm was ‘third acre’ land, part of the third of Canvey originally given to the dutch. The building was unsual as it had been built of timbers salvaged from the wreck of the ‘Ajax’ that was driven ashore at South Shoebury, hence the name.

According to D W Dowd’s ‘Canvey Cyclopaedia’ in 1815 Wreck Hall was sold for £1,300, having been bought in 1770 for £110.   It was originally intended to let it go for about £800 but too much drink had been imbibed at the Lion Inn, Rayleigh, and a competition between bidders sprang up.

In the 1841 census Edward Morley, who was born on Foulness in 1795, lived at Wreck Hall with his family. (His wife Sophia and five children) Edward had lived on Canvey Island at least since his eldest child, Edward, was born in 1826. The 1851 census shows Edward senior still in residence, the 1861 census just says Southchurch, Canvey but is likely still Wreck Hall. Edward Morley died in 1863 and the tenancy was taken over by William Edwards as is noted in the 1871 census. By 1881 Wreck Hall is uninhabited and is no where to be found by 1891. 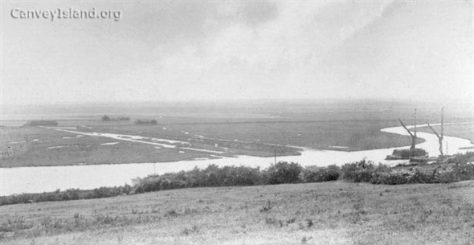 Edward senior had six sons and one daughter. Edward (1826) and Henry (1827) were the first to leave and both can be found in Islington, Middlesex by 1851 their occupation Saddlers and Harness Makers. Followed by William (1834) and David (1838) who are in Hackney, Middlesex by 1861 also working as Saddlers and Harness Makers. I cannot find Stephen (1845) in the 1861 census but he is not with his father but by 1871 he is in Hackney, his occupation noted as greengrocer. The youngest son Frederick (1848) stayed with his father until his death then joined his brothers in Hackney working as a Stone Mason. Edward’s daughter married James Brewer in 1857 and stayed in Essex in the Horndon on the Hill, Bulphan areas.

Edward Morley (1826) married Sophia Bull in Marylebone in 1847. Edward and Sophia with their seven children moved to Stoke Newington where they can be found at 7 Church Street, in the 1861 census. The family together with three more children can be found in Church Street, Stoke Newington right up to the 1891 census. Edward died in 1892 and is buried in Tottenham where two of his brothers William and Frederick hd settled. Edward’s son Samuel continued the family business at 13 Church Street at least until the census in 1901. 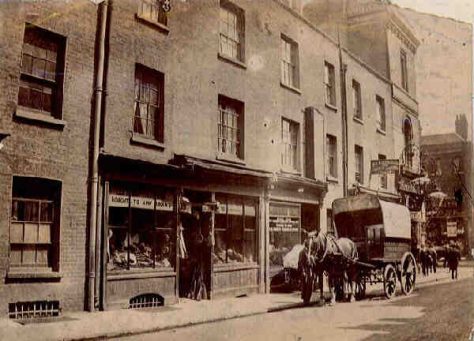 To Edward Morley born on a farm on an island in the Thames, Stoke Newington could not have been more different. Edward must have seen many changes in the years he ran his Saddlery and Harness business from his premises in Church Street. Stoke Newington, about the time Edward and his family arrived, was no longer a separate village on the outskirts of London. Church Street with its large Victorian houses was already the home of many writers and dissenters some of whom will be known to you. Daniel Defoe (1661-1731), who wrote of ‘candy’ island, the ‘damp part of the world’ and the ‘decay’ of the women, in one of his Travel books, lived and wrote some of his books in his home in Church Street. Stoke Newington had the largest concentration of Quakers in London. William Booth, founder of the Salvation Army is buried in Abney Park Cemetery, Church Street. Edgar Allan Poe, writer, attended Manor School, Church Street c1820.

In the late 1800’s housing developments sprung up, some of the large old houses were demolished and many terraced houses and tenements were built. Charles Booth (1840-1914) a distinguished Victorian gentleman carried out a survey (1886-1903) of London establishing the differing levels of poverty. Many of Booth’s notebooks containing descriptions of individual roads remain today along with his poverty maps. Part of the map for Stoke Newington dated 1898-99, shown below, where you can clearly see the large amount of housing that had been built since the map of 1848. According to his map, Stoke Newington, at that time was still quite ‘well to do’. Houses marked yellow are Upper-middle and Upper classes. Houses marked red were Middle class with the pink and purple poor to fairly comfortable. There are very few blacks and blues, which were the lower class and poor families. 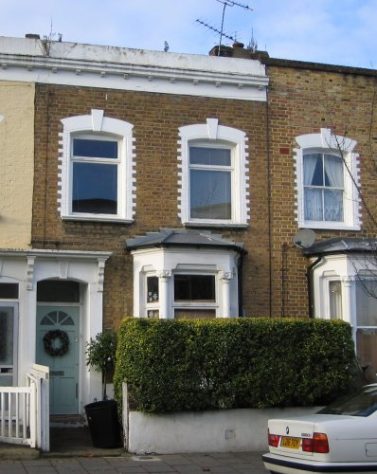 My mother (a country lass from Dorset) moved to one of the terrace properties in Stoke Newington as a new bride in 1938. My brother and I were born there some years later. The house where we lived was only a short walk from Church Street and even closer to the place where Daniel Defoe lived. (see c1848 map)  I would walk up my road cross to Defoe Road then turn right into Church Street to go to school at William Patten Primary, (named after another author, who owned the lease of the Manor of Stoke Newington from 1550-1568) which is located at the High Street end of Church Street on the south side near the Three Crowns pub (Not sure what it was called in my day). I do remember there were quite a lot of pubs. Two in my road alone, it was a long road! 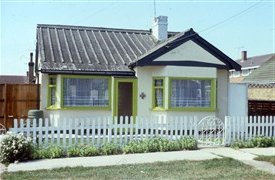 In the 70’s I moved with my family to Canvey, my mother who by then was widowed followed a year later. My mother bought an old timber roughcast bungalow in the east of the island in Juliers Road not far from the very place that the Morley’s had left about a hundred years earlier.

One of life’s coincidences, but I think it makes a good story.

Note: D W Dowd’s ‘Canvey Cyclopaedia’ can be accessed and search at http://freepages.genealogy.rootsweb.ancestry.com/~canvey/ 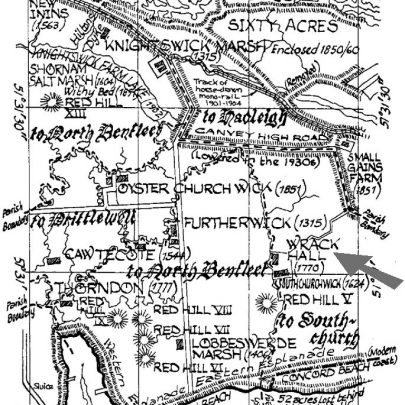 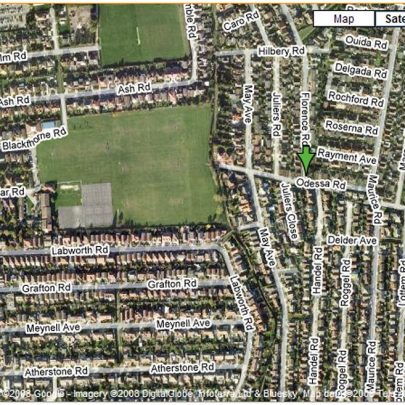 Aerial picture to show the area to the right of King George's playing fields. The dyke running north to south can be clearly seen. Wreck Hall would be standing about where Odessa Road starts.
Google 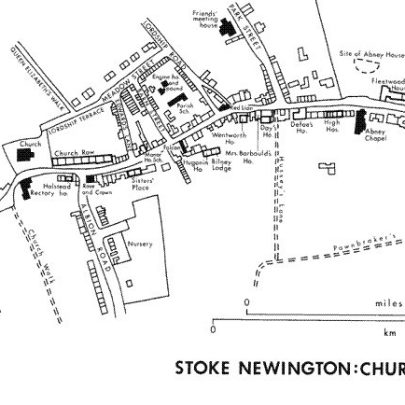 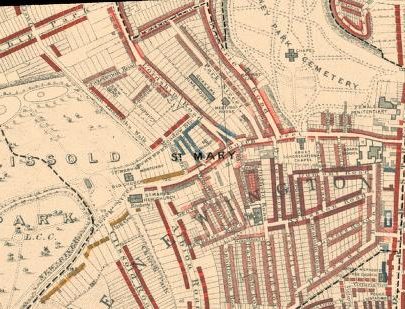 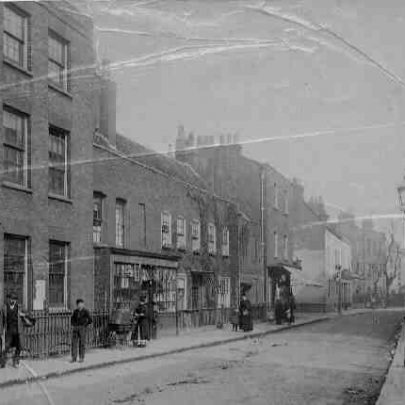 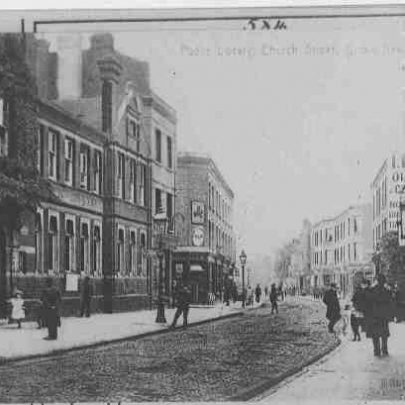