Vicar of Benfleet and Priest in Charge Canvey Island 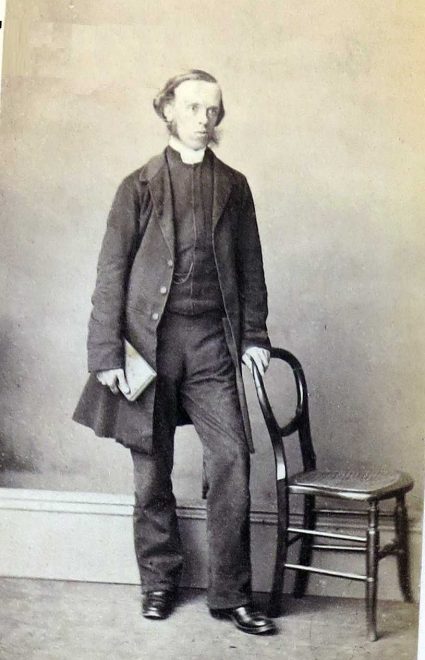 Rev Thomas Julius Henderson was the Vicar of Benfleet from 1859-1872, also being the Priest in Charge of Canvey Island 1860-1872. He can be found in several directories for the period.

Thomas was born in Walcot, Bath in 1828 to John Henderson and his wife Caroline Poyntz neé Matthews. His father, John, entered the Royal Navy in 1803 at the age of 15. Died of his wounds in 1829 the year after his son, Thomas, was born.

He was educated at Wadham College, Oxford before becoming a Deacon in 1850 then Priest in 1851. He was at Messing, Essex then Kennington in Berkshire before moving to Benfleet.  He married  Francesca Jane neé Brand in Rochford in 1856.

The couple are living at the Vicarage in Benfleet in the 1861 and 1871 census. Also recorded  in the census are their daughter Frances and Thomas’ widowed mother Caroline.

Benfleet Community Archive has several great pages from the Memoirs of Miss Henderson (Frances Henderson daughter of Rev TJ Henderson. You can see their pages by clicking on the link above. Here is a short excerpt about Canvey:-

In these days, Canvey was part of the Parish. Previously the responsibility for Canvey Church was divided among nine “mainland” Parishes, with the proviso that 26 services a year should be held. This was meant to allow for at least a fortnightly service, but the journey was so difficult and the Clergy so lax that the services were all arranged in the summer. This practice was, of course, stopped by my father. Once he was visiting a sick Carter on the Island and the man said, “I be main bad, sir. Many’s the time when I’ve seen that there Chapel of yours full to the roof with casks of spirits”.

My father started a weekly service on the Island.  Sometimes the tide was too high for the horse and gig to cross, and a boat had to be used. Gladwyn the Ferryman would take his passengers pick-a-back when the tide was out. On one occasion he carried the Bishop over in this way. Mrs. Ellis of the Farm once attended some function on the Island wearing her best silk gown and velvet mantle, and, returning was seated on the back of the dog cart when she was jerked out and deposited on her back in the mud!

The Canvey Chapel of our time had neither Chancel nor Vestry; there was a small corner where Mr. Hill, the clerk, pulled the bell and my father vested. The font was the discarded one from Benfleet. The building was of wood, with outside shutters to guard the windows from the violent storms – quite a convenient place for smugglers.

The population was small and scattered. There were two Inns, one the famous “Lobster Smack”, which used to be a rendezvous for bare-fisted prize fighters. The principal land owner was a Mr. Hilton: he trained race horses there, one of which, to the pride of the Parishioners, won the Derby. The people were surprised and annoyed when my father refused to have the bells rung on that occasion.

Once, when Mr. Hilton paid a surprise visit where there was a girl at home who he would certainly have thought should be out ‘in service’, her mother made her hide in the copper until he had gone.

A number of Canvey folk attended Sunday morning services at Benfleet, among whom were Mr. Hilton’s agent, Mr. Stower and his two daughters.