Served on HMS Orlando during the Boxer Rebellion

As a family historian my main interest are the people who come to live on Canvey. Where they come from, why they come here and what sort of lives they lived.  Using the records available it is easy to see that the vast majority of people who have come to Canvey in the distant past have been to do with farming either as owners, tenants or labourers.  Hester changed all that. From the early 20th century all kinds of people from all walks of life flocked to our little Island in the Thames.  I have been amazed by what I have been finding.  Maurice Blackford is one who was unexpected. 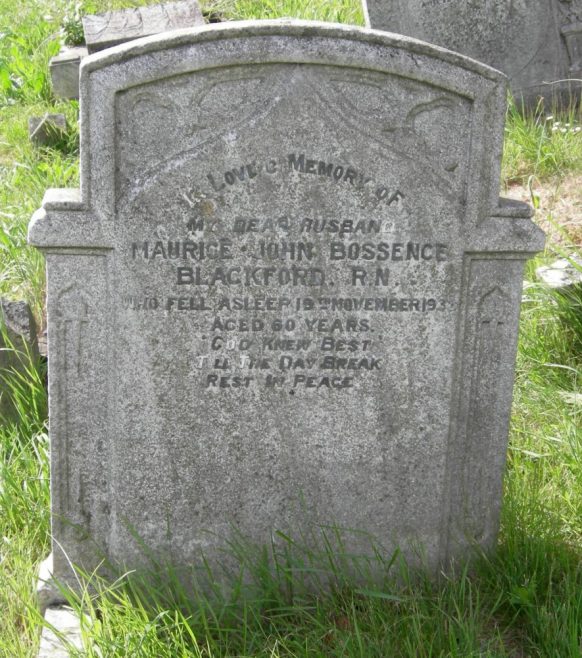 Maurice’s grandfather, also called Maurice was born in Palgrave, Suffolk and served in the Coastguards from 1827 to 1866 serving in Freshwater in the Isle of Wight where Richard, Maurice jnr’s father, was born in 1838. Richard served in the Royal Navy he was a Chief Quartermaster Commander in the 1871 census stationed in Gravesend. He was ‘at sea’ in the 1881 census and in the 1891 census he too was in the Coastguards.

Maurice, born in 1873 when his father was stationed in Gravesend, followed his father into the Navy.  According to his Navy records he signed up in 1894 for twelve years. He was a short man standing only 5 feet 5 1/2 inches tall. His record states he had dark grey hair, hazel eyes and fair complexion. He had a tattoo on his left arm and a scar on his right hand.

Maurice served on several ships during his 16 years in the Navy and the most significant one I have found is HMS Orlando. The other ship he served on were HMS Royal Oak, Prince George, Revenge, Excellent, Pandora, Crescent, Psyche, Gibraltar and Victory. 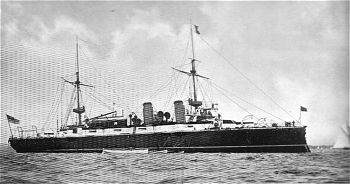 HMS Orlando was a Royal Navy armoured cruiser built by Palmers at Jarrow. The ship was launched on the 3rd August 1886 being completed on June 1888.  The ship’s first tour of duty was the Australian station in 1890.
The Orlando left to go to China where she took an active part under Captain J.H. Burke in suppressing the Chinese outbreak in 1899. The ship was the first to arrive on the scene when trouble arose, and it was her Naval Brigade which originally undertook the defence of Tientsin. Captain Burke’s gallantry, and that of the brigade he commanded during the long and arduous fighting, which resulted in the capture of the city, formed the subject of a special dispatch.

At the beginning of the operations the Orlando had a complement of 486 officers and men, of whom 31 were sent to Peking, 112 to Tientsin, 104 accompanied Sir Edward Seymour, 99 took part in the capture of the Taku Forts, and l6 were absent in lighters, etc., in the river, leaving 124 on board. Yet, with all these men absent, the Orlando steamed 900 miles and brought the Chinese Regiment from Wei-Hai-iAfei. Captain Burke died on the passage home. Her casualties were 5 killed and 26 wounded.”

As an ERAS (Engine Room Artificer) it is possible that Maurice was one of the 124 crew members who stayed onboard and steamed the 900 miles for reinforcements. His Navy records tell us he was aboard the Orlando from the 16 February 1899 until July 1902.

His last posting was on HMS Victory in Portsmouth before being transfered to the Royal Navy Hospital Haslar. He was invalided out of the Navy on January 7 1909.

At some point after 1909 he moved to Canvey perhaps because of the close proximity to the sea. He died in 1933 aged 60 and was buried in St Katherine’s Churchyard.