My visit to Canvey Island 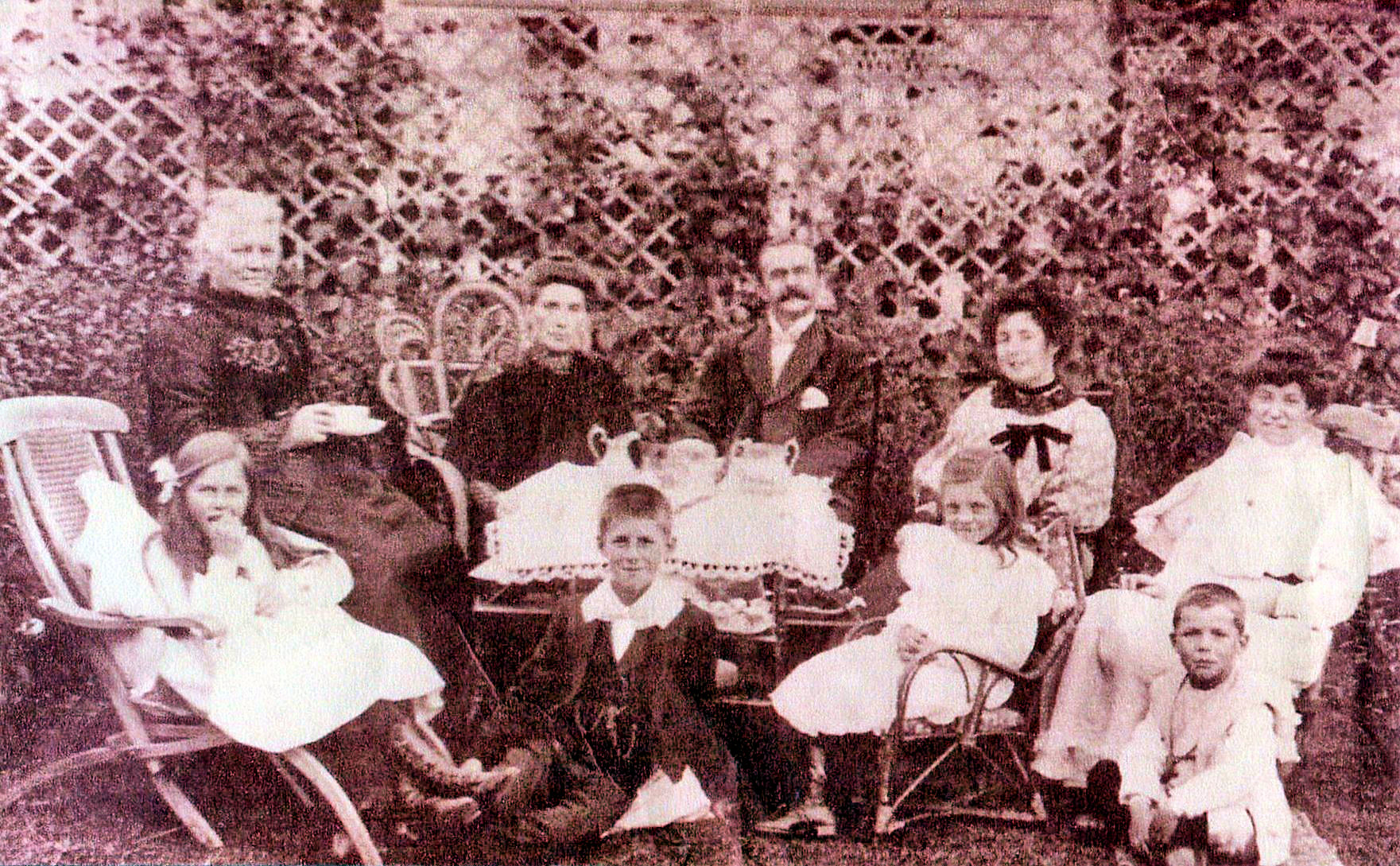 It was in December 2017 that I made a pilgrimage to Canvey Island in Essex,UK to the resting place of three of my ancestors. These were both my maternal grandparents, as well as my maternal great grandmother (big granny) who passed away in 1938. Having put together a Family Tree of the Edwards/Loescher/Lester family many years ago, it was time to put closure to the Tree in order to pass it on to younger members of the family. 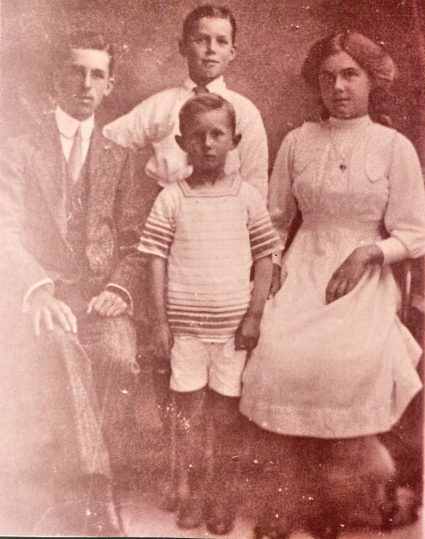 With trepidation and excitement, I set out to travel some 5,000 km to put to rest this branch of our family. Online information was helpful but I needed desperately to see the graves in person. While browsing online I came across the name of a post office and wrote asking a few questions. To my pleasant surprise the postmaster replied, sending me an old map showing the oldest cemetery on the island. In the meantime, on writing for a copy of the Death Certificates, grandfather’s revealed he was buried in Rochford District.  And the old map shows Rochford Town is off the island. This might be a problem finding out how to get there by train. However the day after I arrived I decided to attempt to find the two grandmothers’ graves first. Armed with the old map, I took a taxi to St. Katherine’s Church (now The Heritage Centre).

A sea of gravestones confronted me. Where to start looking for the 1912, 1938 and 1947 sections put me in a quandary. The attractive St. Katherine’s church looked so inviting. My curiosity caused me to knock on the door. On opening, I was startled to see a man until I realized it was an effigy of someone. I saw a door with a window, on peering inside there were people sitting at a table.  I dared to knock and open. One person said we are having a painting lesson.  With boldness, I excused myself. I explained my mission and asked if they could put me in touch with someone. A name sprung to mind from papers I had been reading about the Archives. Someone approached me who said she was herself Janet Penn. What an absolute blessing it was to meet up with her!  Apparently this lady, from the Canvey Community Archive, has spent 10 years photographing the headstones at St. Katharine’s and transcribing the burial records. Although 2000 graves are registered, over 1200 now have grave photos along with as much detail as she could trace.

It was Janet who told me grandfather too was buried on the island. I did not know that Canvey Island and two other districts all came under the umbrella of “Rochford District”.  Janet said St. Nicholas Church held some records. This was exciting news to learn the three ancestors were all buried on the island. Walking along the same road in the winter fresh air, I contemplated how everything had gone smoothly thus far and thanked the Lord for guiding me to the old cemetery before taking a taxi to Rochford; an hour’s journey past Southend.

On opening the front door of St. Nicolas Church (such a pleasant-looking church), a gentleman who I knew must be the Reverend by his collar, greeted me with a huge smile. Said he was just going out but to make myself a coffee and the secretary would be back very soon. What a welcome! Dawn returned, went to her office and ran off two copies of diagrams of the grave sections. One for the 1938 grave and the other for the 1912 and 1947 grave. Furthermore, the Rev. Canon David Tudor returned, saying he would run me back to The Heritage Centre. He took one sheet, I had the other, then we could be seen hurrying up and down the sections looking for the names. The Rev found the 1938 grave of Emma Edwards, great grandma (big granny). I was not so successful and obviously he was busy and had to leave. While he was on his mobile I waited just looking around when suddenly I saw “Richard Loescher … 1912”. Was I delusional or was the excitement of knowing their remains were there somewhere too much for me. No, there is his name on the headstone with Leah Jane’s name on the headstone (like an open book) next to his …1947.  The Rev had been asking for more detail as to where the grandparents might be. I raised my arms and my voice, telling him I had found them.  This grave was mightily dilapidated with age (1912). Without the help of David Tudor (he said to call him David) I may have spent many hours searching. 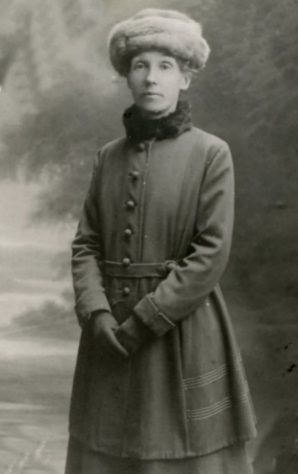 The Funeral Home next door called for a taxi for me and back I went for a late lunch. Later I went back to St Katherine’s armed with cleaning gear to attempt to clean around the wording. On pulling weeds I noticed the concrete over the top of the caskets was crumbling. I then stopped the cleaning. Amazingly, the grave of Emma Edwards, the greatgrandmother, who passed away in 1938, was in remarkably good shape and had not sunk as the other grave, possibly because it was further from the road. Several photos were taken of both graves, which wording is not decipherable until the lettering is properly cleaned. Although my mission was accomplished, I still had work to do to find someone to do that work on grandpa’s and grandma’s headstones. The other grave doesn’t have a headstone, but Emma Edwards’ name is carved along the side, and when the moss is pulled a picture will be taken.

All this happened in less than a week. I was tired and needed a rest now to mull over what had happened so quickly. The couple from the post office invited me over. They both run the post office. Taxied over to them, never having met them. What a very nice couple who gave up half a day later that week to take me to a huge shopping centre – Lakeside. 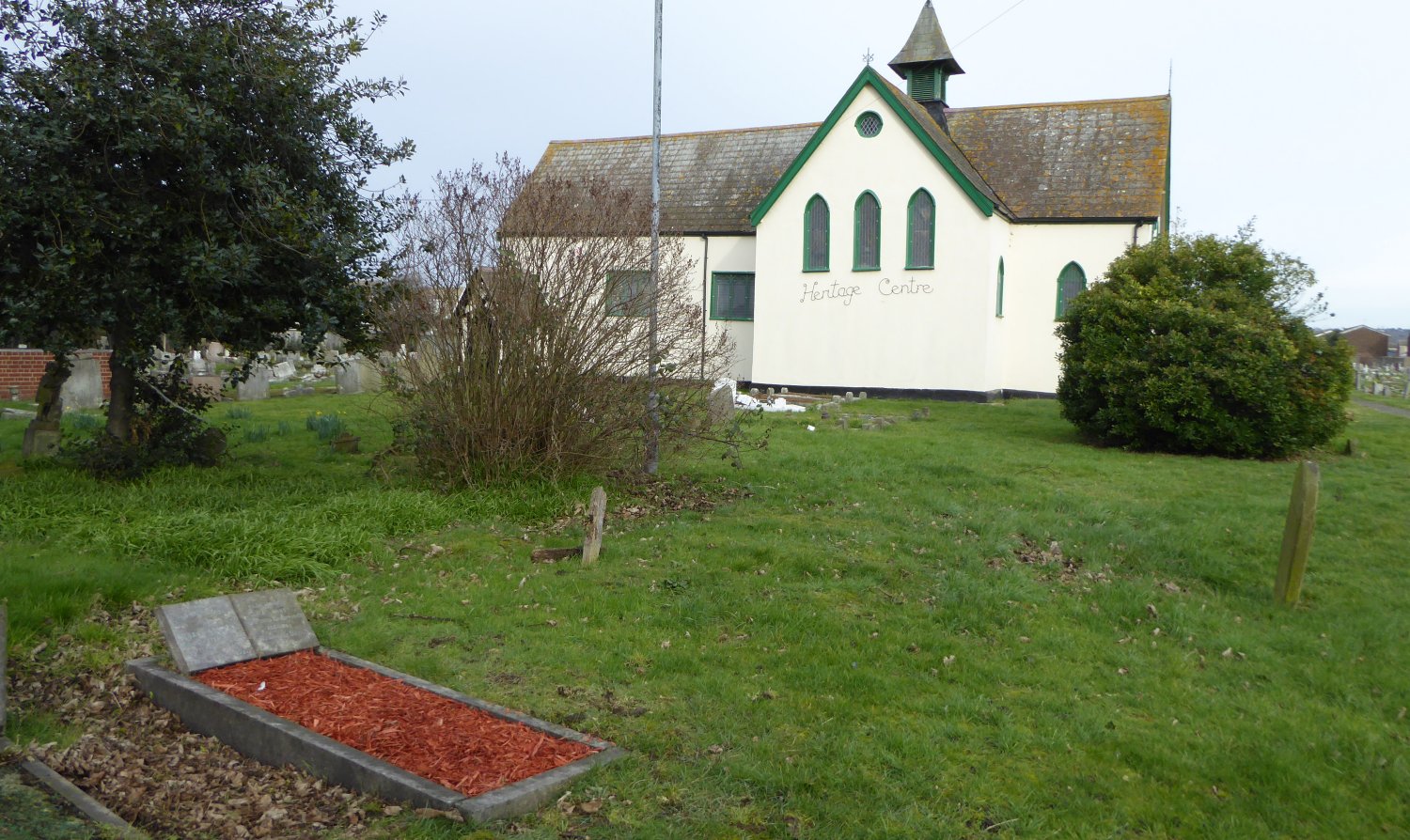 During that week, while walking (5 mins to the stores) I stopped to ask a young man a question. He and his father were shopping for Christmas and asked me to join them for a coffee. The father said he was not working for a month to recover from an operation and offered to look at both graves if I would show him the plan of where they were. The people on the island are all so friendly, helpful and kind – a happy, healthy people. 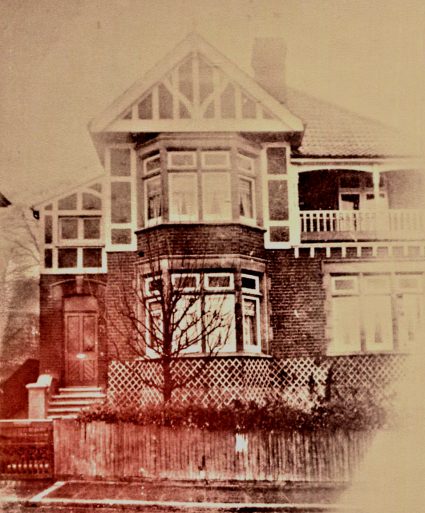 ‘Linden’ the Loescher home in Leigh-on-sea

The island grew during and after the Second World War, now sporting 40,000 people! When my family and I went in the 30’s to stay with grandma every year for two weeks’ holiday, there were few roads with one main Canvey Road. They first lived at Leigh-on-Sea, at the doctor’s advice, as grandma was ill living in London. Later, they bought a very old cottage where they would spend the summers on the island. It must have been very difficult for grandma when grandpa died in 1912, being left with four children. I surmise that was when she sold the large home on the mainland and went to live in the cottage?  Furthermore, to be living in England during the First World War with the German name of Loescher could be dangerous for a widow and the children. Of interest is grandma, with great difficulty, had the name of Loescher changed by Deed Poll to Lester.

Another pleasant islander whom I met was a Martin Lepley. Janet called him.  He called me and said he had copies of documents (his mother is German) and would I like them. He showed me lists of names of men/boys who had enlisted in the forces. And there, sure enough, were the two older Loescher boys enlisted to fight against the Germans. They were, of course, British subjects, born in London. Interestingly enough was that one was invalided out and later was awarded the Silver Cross.

The Hotel named The Oysterfleet (only one of two on the island) was perfect for the week with friendly staff, clean rooms and good food. I would recommend it to anyone. I will be able to say my mission was fully accomplished when both graves are cleaned up, the lettering clear enough to show up in the photographs, and soil put on the grandparents’ grave with small red stones thrown over the top.

After praying for safety, with others also praying for me, I felt the Lord’s Hand every step of the way, even during the flight there and back to Canada.  Now I can Rest In Peace! 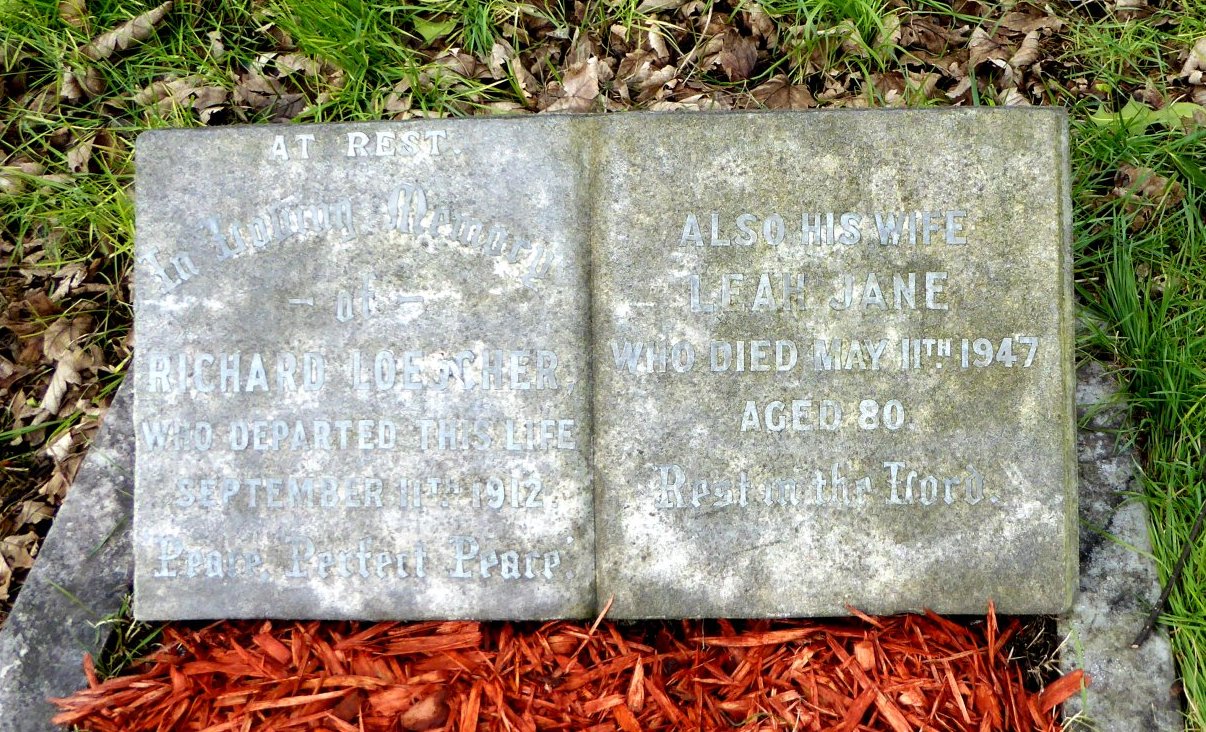