Our Lady of Canvey

A brief history of the Catholic Church. 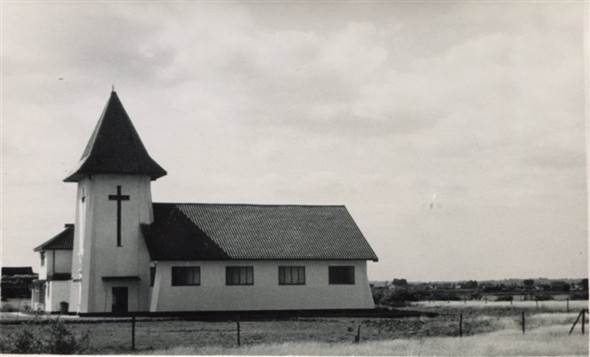 The official opening of Our Lady of Canvey and the English Martyrs Catholic Church was on the 6th June 1938, and the 80th Anniversary was recently celebrated at the premises in Long Road on Canvey Island. The official opening in 1938 was presided over by the Right Reverend Arthur Doubleday, the second Bishop of Brentwood.

Prior to Father John Watson being appointed the first resident priest in April 1946, Canvey was served from Leigh as a chapel-of-ease. According to the Catholic Herald dated 11th February 1938 the Catholics of Canvey had heard mass in a private house for 35 years. The house known as Kismet House was owned by a London Jew, Nissim Levi, who had converted to the Catholic religion. He bought the house on Canvey Island as a holiday home.

The Reverend Francis Gilbert would travel backwards and forwards from Grays, but as the priest of Our Lady of Lourdes Leigh-on-Sea he had made provision for mass on Canvey from 1922. The congregation grew and a plot of land was sold to Father Gilbert in January 1934 by Mr. Arthur Clark a Canvey landowner. The land purchase encouraged Mr. William Mulhall Corbett of Furtherwick Park, in July 1934 to organise a petition for the purpose of providing a new building. A petition of 200 signatures was subsequently sent to Bishop Doubleday requesting permission for a church to be built on the land. The petition was obviously successful as the first turf was cut on the plot by Father Gilbert on the 12th March 1937 (Ash Wednesday).

The new church was to have a spired tower with a roof of green tiles, and the whole of the exterior to be snowcrete rendered. The church was expected to be completed by Easter 1938 and would accommodate 250 people.

Eugene Lawrence, who was one of Mr. Arthur Clark’s executors in his will, designed the church. The structure was a steel framed building with brick walls, green glazed roof tiles, and a Dutch styled tower and spire. Building began in Long Road during April 1937, one month after the official turf cutting ceremony. The alter was supplied from “Our Lady of Lourdes Chapel” at Leigh-on-Sea upon completion of the church.

Prior to the official opening, the first mass was celebrated in the church on the 17th April 1938. 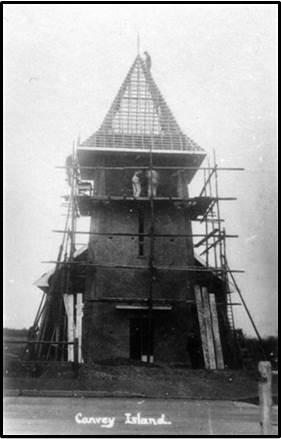 Father John Watson was appointed Parish Priest of Benfleet and Canvey in January 1946 and in April 1946 was appointed the first resident priest. As there wasn’t a presbytery in Long Road Father Watson had lodgings in Runnymede Road. During his term of office Father Watson’s congregation flourished under his guidance. He remained at the church until 1947 when Father Bernard Manning replaced him.

Father Manning rented a house in Denham Road and stayed there until the new presbytery was built next to the church. Father Manning moved into the new dwelling on the 15th August 1952 and from that, date Canvey and Benfleet were designated as separate parishes.

After the devastating floods caused by a storm surge and high tides which swept down the Thames estuary on the night of Saturday-Sunday 31st January/1st February 1953, Father Manning distributed blankets and supplies he had stored in the church tower. The floods devastated the island and unfortunately 58 people lost their lives and many more made homeless. For his heroic efforts to help flood victims he earned the respect and thanks of the island citizens. Less than a year later, Father Manning was replaced by Father Patrick Carthy as the new Parish Priest.

The ex-Anglican Convent on Canvey Island was purchased by the “Sisters of Mercy” of Wanstead in June 1950.  They opened a private school for young girls and boys from Canvey and Benfleet. It ran as a private school, achieving noble pioneering work, until the 22nd September 1955 when the Right Reverend A. Beck, Bishop of Brentwood, blessed and opened the new Canvey Island Roman Catholic Primary School. The new school was named St. Josephs R.C. School and comprised of five classrooms and a hall. When two extra classrooms were added in February 1959 plus the recent addition of further building extensions, ensured that St. Josephs is flourishing today and is a vital part of the parish community.

A local property developer, Colonel Horace Fielder kindly and generously offered a plot of land as a car park adjacent to the church, which was gratefully accepted in 1962. The priest at the time was Father Gordon Godfrey who wrote to Canon Goldingay with a proposal for a new church.  The congregation had expanded beyond the capacity of the church building to accommodate the numbers of parishioners attending mass. The proposal was for the new church to be built on a new site adjacent to the convent.

On the 25th April 1967, Father Godfrey was informed the diocese had shelved the plans for which planning permission had been sought. As the parish church was to remain in Long Road, Father Godfrey again wrote to Canon Goldingay suggesting a social centre in the form of a parish hall would be beneficial. Plans were completed and the hall was built by the late 1970s, following several years of correspondence and legal problems. When needed the hall is used as provision for extra space for the congregation. It is used extensively for all the social events including regular coffee mornings.

The current priest is Father Eamonn Power ably assisted by many volunteers who continue to maintain the church history of being there for the community. The time given up by countless parishioners enable them to assist and help those less fortunate members of the congregation and much needed fund raising. The funds assist with the Canvey Community as well as the running costs of the church. Some parishioners help out at each session of mass, whilst others act as Eucharist Ministers providing Holy Communion visits to the sick and unwell community. A Eucharist Minister is a lay person ordained by the church who assists the priest in administering the sacraments of Holy Communion.

Social activities are provided by the parish Social Committee and Christmas dinners are an annual event for senior citizens. Cub and Boy Scout movements have been a long established activity which is provided for the benefit of the children.

This article is based on the leaflet produced by “Our Lady of Canvey and the English Martyrs” for the celebration of the 80th Anniversary of the Catholic Church on Canvey Island in 2018.