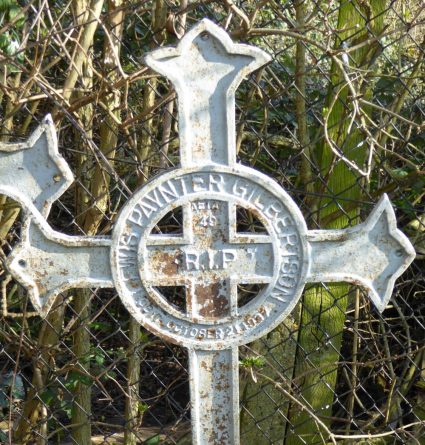 Lewis Paynter Gilbertson is the only male buried in the gravesite of the old Anglican Convent. So who was he and how did he end up on Canvey at the Convent where he died aged just 49?

While I was searching for details about the Mother Superior Janet Mary (aka Catherine Cheeper) and her Sisters, one name cropped again and again, Sister Agnes. Sister Agnes is not one of the sisters who are buried here, she did not die until 1949 but she was definitely here. Her name appears alongside Catherine’s in the census of 1901 and 1911 census. It is Sister Agnes who along with Catherine is buying up land on Canvey in the 1910s. She is also the person who Probate was granted to when Catherine died in 1938. And who is Sister Agnes?

She is Agnes Gilbertson. So straight away we see the connection with Lewis but how are they related? Agnes’ parents were Richard Gilbertson and Ellen Deane. He was a Surgeon/MD in Aberystwyth, Wales. Agnes was born there in 1863 the youngest (that we have found so far) of the family. Her eldest brother was Richard Dean/e Gilbertson who in 1891 was a Solicitor in Pembroke. Richard’s wife was Mary Paynter. Lewis appears to be their second child born 1888 in Pembroke, which would make him Agnes’ nephew.

So we have the connection but how did he come to Canvey?

Lewis was sent to a prestigious prep school called The Grammar School in Oswestry, Shropshire. I could not find him in the 1911 census but in 1912 he is returning from South Africa aboard the  ‘Kenilworth Castle’. Possibly visiting relatives there as his grandmother, Ellen Deane came from Cape Town.

By 1917 he is in Brazil where he marries Fernande Raymonde Hebert in a civil ceremony in Rio de Janeiro. He continues to live in Brazil but visits the UK with his wife twice in 1920 and 1924 but in 1931 the couple return to the UK for the last time. On the travel documents he is stated as being ‘Cable employee/Telegraph’. No children were recorded as travelling with them. The couple lived in Knatchbull Road, Lambeth where they are recorded on the Electoral Roll until 1937.

So, from the information we have so far we can only guess at how he came to be buried on Canvey. Did he come back to the UK for health reasons? This would seem a logical explanation. Was it to Canvey he came in his last days to be nursed by his aunt and the Sisters in the Convent? We may never know but it seems likely. His wife continued to live in London until her death in 1949.

Update since our visit to Douai Abbey to view the Convent records. Lewis could have been a Rev. It was noted that  Rev Lewis Gilbertson presented the Convent with a Crucifix (Black Cross). ‘The cross was from among the effects of an old Cardinal who lived in the Vatican and died at the age of 90. The small coat of arms at the base are those of a branch of the Italian Royal Family extinct for over 100 years before the death of the Cardinal.’