You are here: HomenextHistorynextOld CanveynextLettersnextLetter from Juliana King to her son Robert

Letter from Juliana King to her son Robert

The following is an extract from a letter written by Juliana King in 1875. She was the wife of Canon King the Rector of Leigh and wrote letters to her son Robert when he was at school at Felsted.

The letters are in the possession of the Leigh Society and have been transcribed by members of the local U3A. This letter describes the crossing to Canvey Island and the opening of the new church. 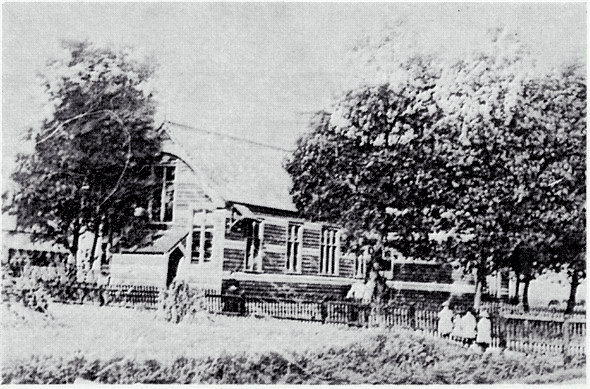 Picture of the striped village school

I must begin by giving you an account of the opening of Canvey Church last Tuesday.  It was fortunately a very fine day, except that there was one shower just as we were driving away after lunch.  Papa, Emmie, Judy, Mrs. Spencer and I, went by the ¼ to 11 train, and a great many Leigh people besides.  We had told Mr. Hayes to have a carriage ready for us at Benfleet, but it was not there when we arrived and there was about 3 feet of water in the creek!  Some went over in a punt, at last a Mr. Belcham from Rayleigh drove up in a small carriage with a hood, just big enough for two and Mrs. Spencer asked him to give me a seat, he very civilly got out, and then Mr. B. said they could take Emmie and me as well!  E. sat on my lap the whole 2 miles to the church, and Judy on the box with the driver – we had to wait about 1/2 of an hour to let the water go down a little, but at last drove through – it came up pretty near the footboard of the carriage, and we seemed so top heavy, I rather expected to upset in the middle, the driver was quite in a fright and did not want to go just then, but Mr. Belcham made him.  The church is a very pretty little one inside; it looks rather like a wooden toy church outside, it is painted a blueish colour with white bands across.  There was some of the choir of St. Paul’s Cathedral there who sang very nicely – but the Service would have been better if they had had a processional hymn – instead of that, the choir walked tamely in, and got into their places long before the Bishop and the clergy came. Everyone stood up when the choir were walking up the aisle, of course thinking the Bishop was coming too, and at last we all sat down looking rather foolish!  There was no voluntary when he did come, and then he read the first Psalm without any music!  But after that the rest of the Service was very nice; some people thought the Bps sermon was too long; it was a very cold day – Judy has had a cold ever since.  There was a very nice lunch in the School House, Papa and I sat just opposite the Bp, and side by side, people say that is only allowed on Lord Mayor’s Day, which it just happened to be.  Another clergyman and his wife, also sat together, just as if it was done on purpose.  We got home by the 4 train but some people remained for the afternoon and Evening Service – as Mr. Hayes was returning at night, his housekeeper tumbled head over heels into a deepish pond, she had a basketful of plate in her hand and went right in!  Her bonnet went off in one direction, her chignon in another; it took 3 men to drag her out, as it was very muddy and full of weeds.  Teddy Thorpe spoiled a splendid new suit of clothes in helping!   The basket was found afterwards luckily for us as a dozen of our forks were in it.  She had to go back, and stay all night in a cottage on the island……………… It will take you a week to read all this so I must conclude with best love old pet.

Your ever most fond and affectionate  Mother

(Ed. This is the second time we have found a description of the boarded buildings in the village being painted in strips. In 1893 they were described as being painted in French Grey with narrow bands of lemon colour. You can read about it here.)

Passed to us by Ed Simpson of the Leigh Heritage Centre