From the Echo Newspaper archive dated 1960. Not sure of the name of the paper but it is something Pictorial. There was a Southend Pictorial? 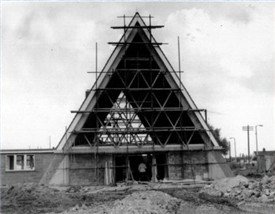 Recorded bell chimes is one of the features of Canvey’s new parish church which will be consecrated by the Bishop of Chelmsford tomorrow (Saturday).

Bell-lovers need not fear that records will entirely replace the real thing on Canvey, however, as the bell from St Katherine’s, the old parish church, has been moved to the new church.

The last services in the old parish church were conducted on Sunday, and next Sunday they will be held in the new church. which is named St Nicholas.

The old church of St Katherine’s was built in 1875, under the direction of Rev. M.Hayes ar-??? in 1872 and decided that the old chapel was inadequate for the needs of the people, so he had it demolished and a new church built on the site.

St Katherine’s now, in its turn, has become too small for the needs of an island, the population of which has reached the 16,000 mark, but it is hoped that although the new church will be the parish church, St Katherine’s will be used as a churchyard chapel. This will be rather expensive, as it is in a proper state of repair.

The Vicar Rev. John A Fleetwood, says the need for a new church has been felt on the island since the 1930’s, when the Island’s population began to rapidly increase and the centre of population moved away from the old Canvey Village.

The Vicar at the time, Rev H.A.S. Pink, pioneered the General Building Fund. Another person who showed a great interest in the new church was the late Archdeacon E.N.Gowing.

The church stands in Long Road, Canvey, near the Walthamstow and Dagenham Estates and is fairly central and convenient position.

The church has been named after St Nicholas as he is the patron saint of sailors, most apt for an island in the mouth of one of the busiest rivers in the world. Also St Nicholas is one of the favourite saints of the Dutch who settled on the island in the early Seventeenth Century.

The church cost £15,000 and another £4,000 is needed before it is paid for. Money has been saved by members of the church by making some interior fittings themselves, but the materials were very expensive.

There are many unusual points about the interior of the church. The rafters are made of concrete, the flooring of white pine blocks, and it has a modern-style pulpit, prayer desk, lectern and communicants’ rail. The church seats about 240.

There will be 24 pews and, in addition, chairs made of blue Jabbolite. The pews came from an old Methodist church in Croydon and are being renovated. Only six will be ready for the consecration. They will be red and charcoal in colour.

For the consecration, seating accommodation for people in excess of 240 will be in the old secondary school. The service will be relayed from the church to the school by loudspeaker systems.