The story of St Nicholas Church starts in 1957 when the Church Council realised that St Katherine’s Church was much too small for the growing population. It was decided to build a much bigger church in a more central position. The site chosen for the new Church was farm land owned by the local Council in partnership with the London Boroughs of Barking, Dagenham and Walthamstow who had hoped to use the land for Council housing. 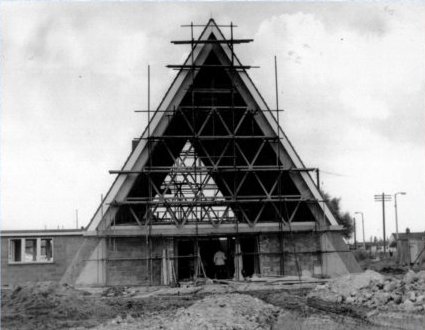 The original plans for the church were rejected by the Diocese so instead of a barrel vaulted roof the revised plans were for a more impressive Church and they included the provision for a belltower but this never came into being. St Nicholas Church website describes the new plans:

The foundation Stone was laid on the 19th May 1960 by Mrs Dorothy Glennie. The builders were Barvis and Co Ltd and although I had no connection with Canvey at this time by coincidence my later to be brother-in-law was a scaffolder on the site.  The Church was finished within the allotted eight months and was Consecrated by the Bishop of Chelmsford, Bishop Faulkner on the 10th December less than seven months later at a cost of £16,675. (The cost of a two bedroom bungalow at this time was about £2,250)The name of St Nicholas for the new Church was decided after a ballot of members.

St Nicholas Church website goes on to describe the internal plans and the work carried out to install the furniture: 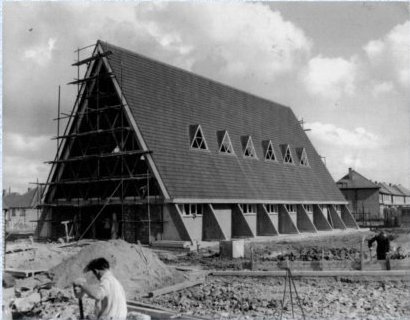 Showing the South Elevation during building work in 1960

The Church Hall which was designed by Mr RC Foyster and built by Mr CJ Hollingberry was added a few years later in 1964, with its large stage it was in constant use by the Church Organisations and for parish events. Indeed I have been there on many occasions with my children attending St Nicholas Playgroup in the late 70’s early 80’s and again later when the WRVS used to hire the hall for the Christmas parties, not to mention the many Jumble Sales I have attended over the years. To replace the old Vicarage in Haven Road a new one was built next to the Church Hall again by Foyster and Hollingberry.

By the late 1970’s the West window was found to be leaking water and upon investigation it was found that the concrete had deteriorated and the metal reinforcement was rusting. It was decided to replace the window with Plyglass in a metal frame and change the shape of the panes from triangular to rectangular. In the early 80’s similar problems occurred with the West window. Because of problems with the morning sun blinding the congregation it was decided to take the opportunity to address this problem at the same time. Tim Venn the Architect called in to redesign the window also redesigned the East end of the church. Instead of the large expanse of glass most of the window was filled in, the vestries were moved to the West end of the Church. Internally the area was decorated with a bas relief showing Canvey buildings, the seawall, shipping and a large cross surmounted by storm clouds whilst outside was a large concrete cross.

To mark the Millennium local artists, schools and other organisations were asked to submit paintings showing what the Millennium meant to them. These were hung in the Church, initially these were to remain there until December 2001 but eight years later they are still there and are now a permanent feature of the church. You can see some below in the gallery. 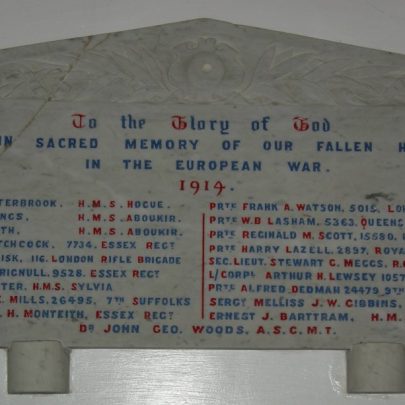 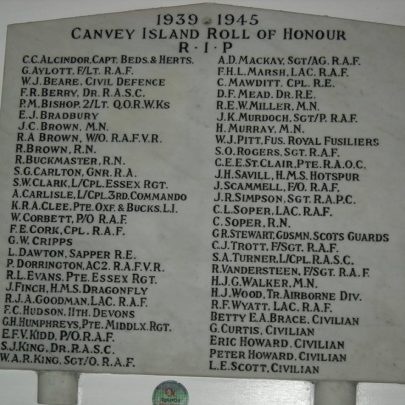 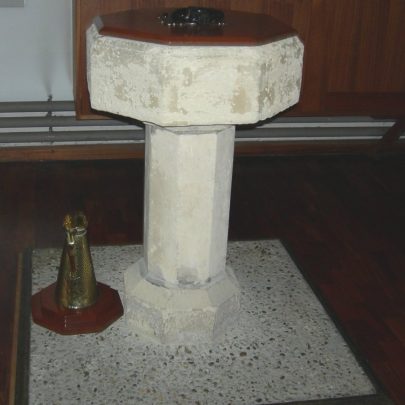 The Font (Is this the one brought from St Katherine's?)
Janet Penn 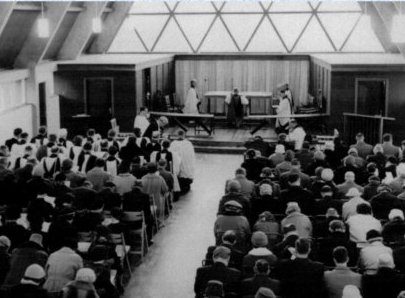 The Alter and East window before the changes were made 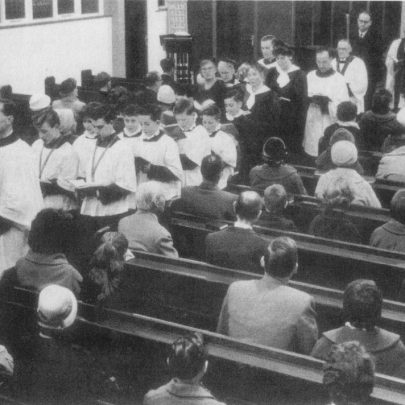 Inside St Nicholas in the early years with Rev. John Fleetwood 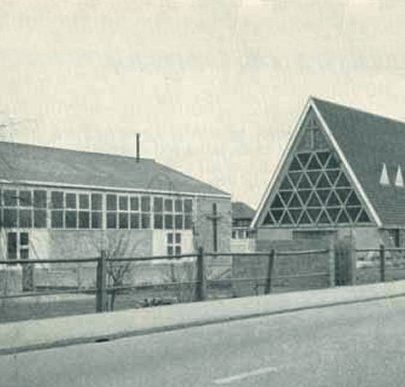 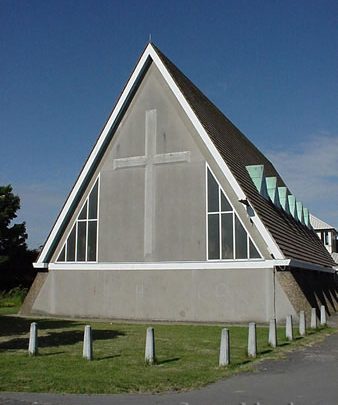 The exterior East wall of St Nicholas Church which was once made up of 36 panes of glass
D. Bullock 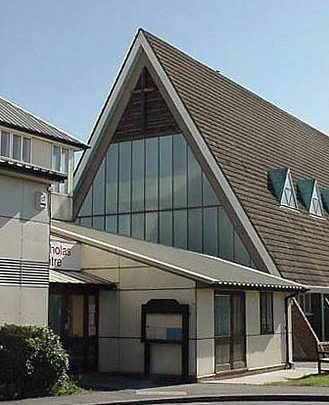 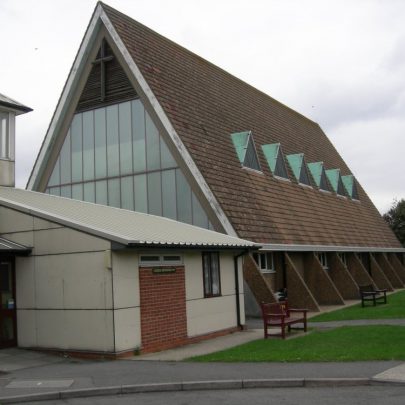 The Church as it is today
Janet Penn 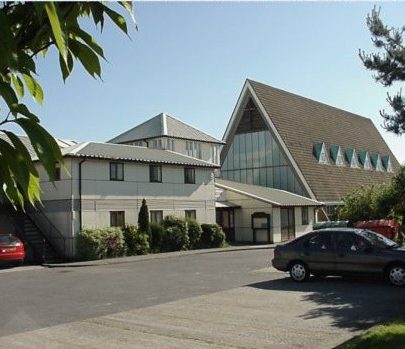 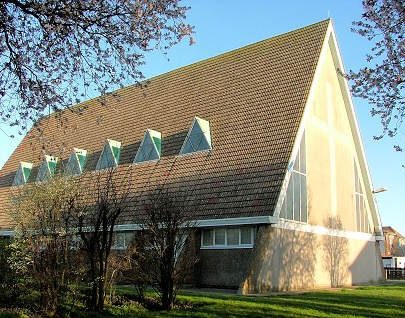 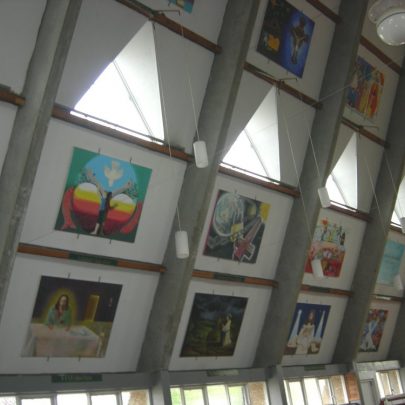 The pictures for the Millenium
Janet Penn 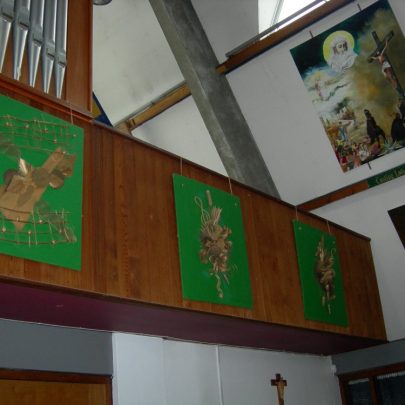 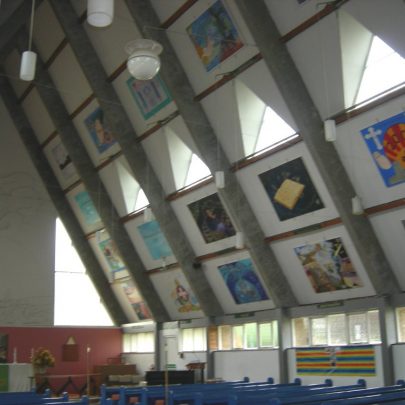 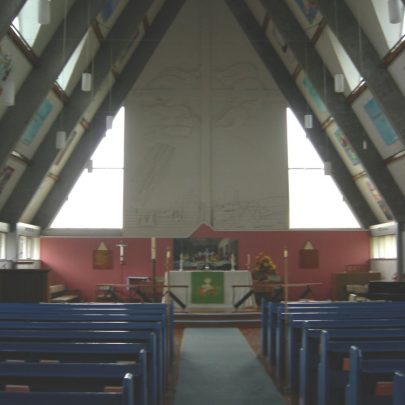 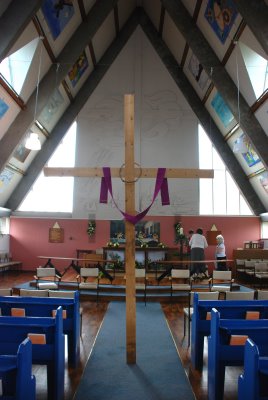