You are here: HomenextPlacesnextAreasnextHolehaven and surrounding areanextThe Canvey Explosives Arsenal Scheme of 1875

The Canvey Explosives Arsenal Scheme of 1875

Dynamite Hulks and the Kynoch Hotel

In the late 19th, early 20th Century explosives were stored in Hulks moored off Canvey. D M Dowd explains in his Canvey Cyclopaedia: 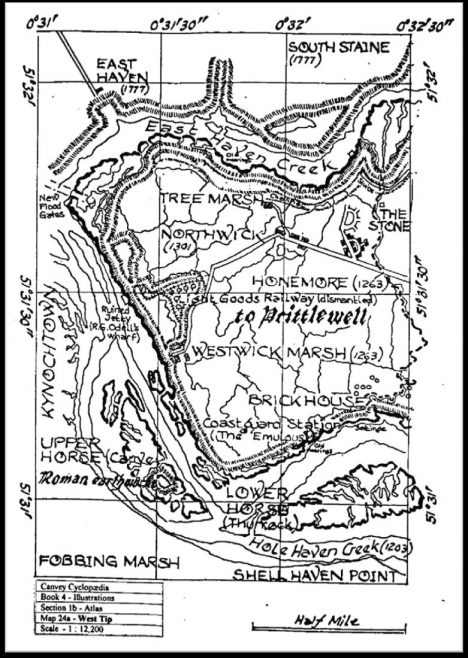 Map of the West end of Canvey showing Hole Haven Creek and part of Brickhouse Farm and The Coast Guard Station which was in the moored Hulk the ‘Emulous’ before the Coastguard Cottages were built near the Lobster Smack Inn. The Map also shows Kynochtown on the left.

In 1875, since explosives were wisely no longer allowed to be shipped up the Thames beyond Mucking Point, the Thames Conservators licensed storage hulks to moor in Hole Haven Creek, where the explosives were transferred to barges.  The first license was given to the British Dynamite Company in April 1875 against the wishes of the Commissioners of Canvey and those of Fobbing Levels.   More than a dozen hulks were moored between Hole Haven Point and Pitsea, gunpowder being transferred from them to caves along Benfleet Creek. Those vessels on the Canvey side of the Creek were named Swift, Amy, Mineroa, Pilgrim, Diamond, Gem and Woodpark.   Three others lay on the Corringham side.

Dowd talks about how the company ‘George Kynoch & Co’ gained possession of the land known as Brick House Farm and went on to build the Kynoch Hotel on part of the land:

How the explosives firm of George Kynoch and Co. Ltd. got possession of Brick House Farm is unclear – two stories are told, either:

Either way, Kynoch’s, established an explosives factory at Stanford-le-Hope to use the facilities of the explosives magazines permanently moored at Hole Haven Creek.  Since Stanford-le-Hope was so isolated,  a village was built for the workers at Kynochtown , and, though some Canveyite workers commuted there, more importantly for Canvey, the company also built Kynoch Hotel between 1899 and 1903 on their 250-acre estate here, for their directors and business associates. 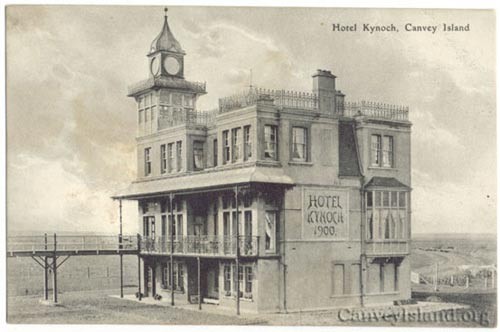 Kynoch’s Hotel had a flat promenade roof, an observation dome for excellent views of the Thames panorama, and was built of brick and stone, boasting a renowned sewage disposal system that drew many interested observers (from photographs of the very obvious pipework, it was presumably pumped up and over the sea-wall).   The cost-estimate for this palatial hotel had been £ 2,000 but Kynoch’s got little change from £ 8,000!  The ‘clock- tower’ was found to have a clock mechanism when demolished but never sported hands or dials!   They also built a 388-foot jetty in front of the hotel in 1907 when they were endeavouring to sell the latter, and had plans for a wharf and railway which were, as always, thwarted by the P.L.A. in 1917. (The location of the hotel is shown in the map see below in the Gallery.)

The following is an exchange in the Commons between Sir Edward Watkin, Mr Healy and Sir William Harcourt regarding the Explosives Act-Storage of Dynamite at Canvey Island on the  31 October 1884

SIR Edward WATKIN asked the Secretary of State for the Home Department, Whether nine vessels loaded with dynamite are moored in a Thames creek off Canvey Island, and are guarded by a small number of Coastguard men who have other duties to perform; and, who is responsible for the control of the storage of this explosive matter?
SIR William VERNON-HARCOURT This matter to which my hon. Friend’s Question refers has engaged my attention for some time. I was quite aware of the danger of these stores, and I have requested the Local Authority to take charge of them; but I have not succeeded. I have induced the Admiralty to take some charge of them-though they are not responsible for them-through the Coastguard. These being floating vessels, the men on land can do but little. When my hon. Friend asks who is responsible for the storage of explosive matter, I am sorry to say I cannot answer that Question. I will refer to that matter, if I may be allowed to say a word about it, because a good deal of attention has been given to it lately, and some complaints have been made of the action which it is supposed I am inclined to take upon it. The real truth is, that the Explosives Acts were drawn mainly with a view to prevent mischief from explosions of dynamite to neighbouring houses and persons, and they were pointed in that direction; but recently a danger which does not seem to have been sufficiently contemplated has arisen, and that is the theft of dynamite from these stores. All over the country a great number of stores were built which have been carefully surveyed, certified, and inspected. A great quantity of dynamite was left in these stores, and no one was there to take care of them. There was no reason why anyone with a bad purpose should not go in the night time with a cart and take away as much dynamite as he liked simply at the cost of knocking off a padlock. It seems to me that is a very unsafe condition of things; and it also seems to me that persons who engage in a dangerous trade of this kind, and who keep magazines, ought to have some responsibility for the safe custody of them. I know very well that there is a great alarm on the part of the trade that this would be very costly and injurious to them. While this circumstance must, of course, be considered, yet the paramount interest in this matter is the interest of the public. All the inspection and Inspectors, and everything else, are a farce, if you take no precautions to guard the places where this dynamite is kept, and if any unauthorized person can go and carry it off in any quantity he likes. At Limerick, in the dead of the night, the whole contents of a store, amounting to 595 lbs. of dynamite, were carried off; and, again, there was a theft of dynamite recently at Greenock. I am considering as carefully as I can about the interests of the trade, and how to provide some better means of protection to prevent those stores being left entirely unguarded.
SIR Edward WATKIN May I ask the right hon. and learned Gentleman if he does not consider that it would be better to place all the stores of explosive matter afloat under the control of the Admiralty?
MR. Timothy HEALY was understood to ask whether the right hon. and learned Gentleman would take care that legislation on subjects of this kind would not be hurried through the House without ample consideration?
SIR William HARCOURT I shall be glad to avail myself of any facilities which the hon. Member may offer to pass any Bill which I may contemplate.
MR. HEALY I did not oppose the Explosives Act

It would seem that one way or another for nearly the last 150 years Canvey Island has been a very explosive place to live. Dynamite, Gas and Oil! 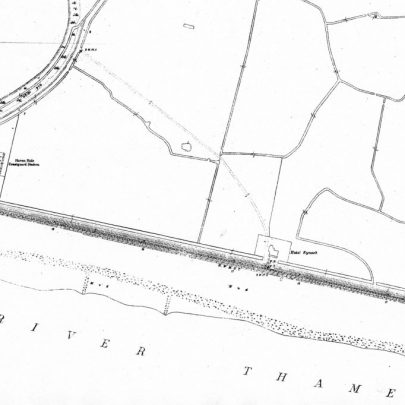