A gaunt, bright red iron giant, it stood lighting the way for sailors for over a century 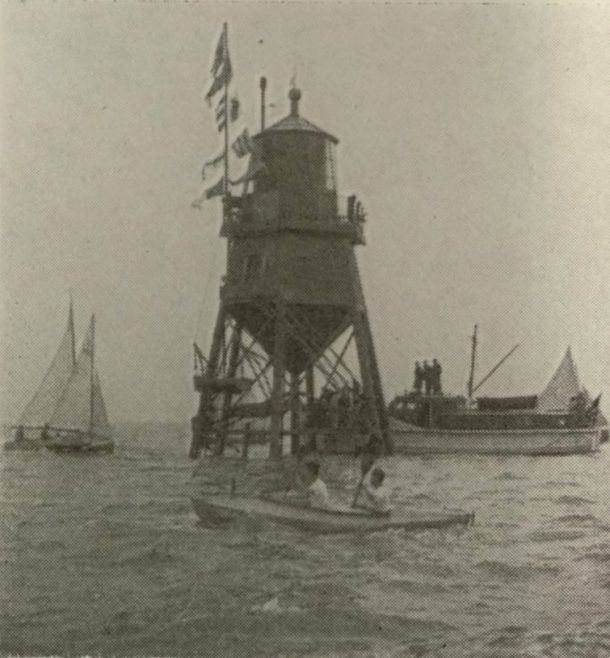 The mournful toll of the large black bell–buoy to the east of Canvey can often be heard by sleepy residents across the Island on a quiet night.  The chilling sound is a poignant reminder of the hazards of navigating the lower reaches of the Thames through swirling fog in the dark before straining eyes and ears were largely replaced by pin pointing electronic wizardry.

The navigation buoy still plays an important part in ensuring the safety of those using this busy waterway but its physical presence falls dramatically short of the manned Chapman lighthouse that stood just half a mile off Canvey and guided shipping to safety for over a hundred years before time and, quite literally, tide took its toll and this extraordinary structure had to be replaced by the buoy.

The mud-flats and shoals lying off Southend-on-Sea and CanveyIsland have been a problem for seafarers for hundreds of years and in particular the Chapman Sands, lying between Leigh-on-Sea and Hole Haven, presented the last serious obstacle for mariners navigating the entrance to the river.  Even the Romans erected a small signal station at the east end of Canvey Island to aid their shipping but after their departure sailors had to rely solely on their navigational skills supported, in good weather, by one or two notable landmarks, such as the church tower at Leigh.

With the rapid expansion in Britain’s overseas trade in the early 19th century, ships were getting larger and consequently their cargoes more valuable.  The Thames had become the world’s busiest waterway.  Not surprising then that in 1847 a prosperous group of London shipowners persuaded Trinity House to place a lightship in the Sea Reach of the Thames, to warn vessels of the dangerous mud flats and shoals.

However a lack of suitable local stone and the soft, unstable conditions of the river bed meant Canvey was not going to be home to a traditional stone edifice. 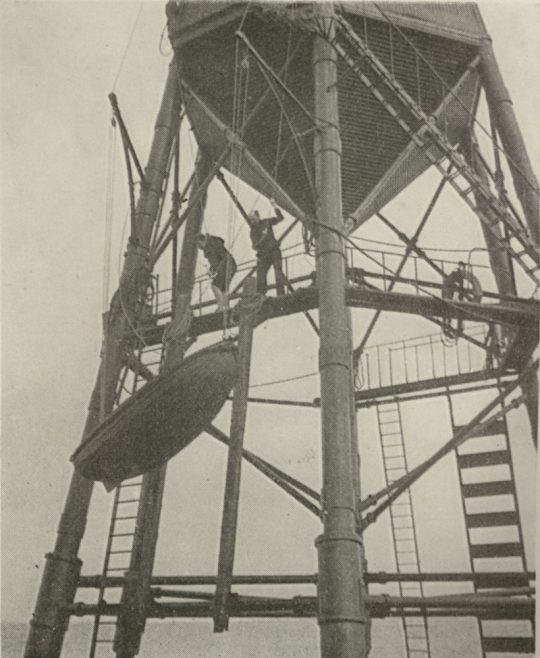 James Walker finally submitted a quite revolutionary design. The new Chapman Lighthouse was basically a prefabricated “pile” lighthouse built entirely of iron, shipped in sections to the river middle and assembled from lighters moored in the tideway.

Painted bright red, complete with signal masts, fog siren and elementary weather recording devices, Chapman Lighthouse, standing on the seaward limit of the sands, half a mile from the Canvey shore, first came into operation in August 1851.

The main body of the lighthouse was supported on seven adjustable “legs” screwed some 40 ft. or more into the soft river bed. The principal keeper and his two assistants occupied cramped accommodation in the strangely hexagonal section directly beneath the lantern. A small bedroom, a living room, a tiny scullery-cum-lobby and a store room made up the entire living quarters. A small dinghy, supported from davits on the spidery frame, provided the only direct link with the mainland.

It was truly a unique lighthouse but success brings inevitable imitation and Trinity House erected similar beacons on the Maplin Sands and the Mucking Flats, two areas with conditions similar to those found off Canvey.

The lantern, standing about 50 ft. above the mean tidal level of the river, showed a fixed white light. Later it was changed to a rhythmic white light of 8,000 candle power plus a red light of 4,000 candle power. A clockwork device was synchronised to emit a white beam punctuated by a red flash every ten second or so. The structure also had a fog bell which gave three strokes every fifteen seconds during foggy weather. Frequent and careful maintenance on the part of the keepers kept the light in constant service. 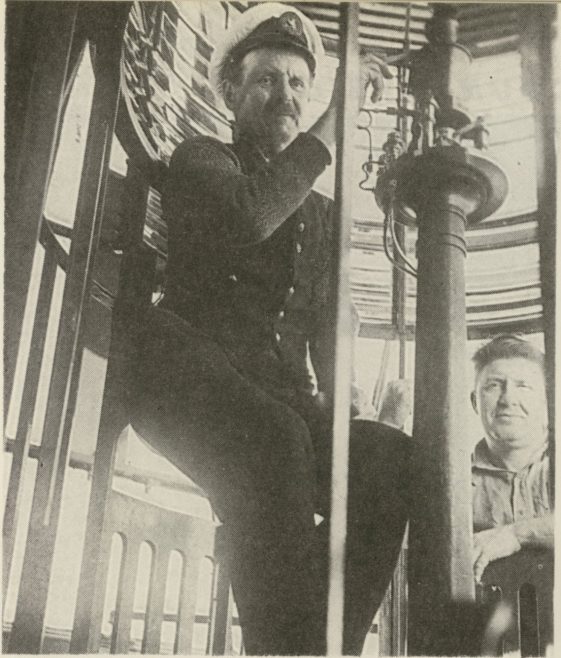 During two world wars the lighthouse was a marshalling point for ships assembling in convoys waiting for the tide to bring armed escorts who would accompany them on their hazardous journeys.  To the homecoming sailors, ploughing their way up river in the last stages of a long and arduous voyage, the Chapman Lighthouse must have presented a welcoming sight.

For over 100 years the lighthouse gave sterling service but in the early 1950s it was discovered that the structure was being dangerously undermined in places by the effects of the scouring action of the tides and, in addition, parts of the submerged iron-work were badly corroded. Urgent consideration was given repairing the structure but Trinity House finally decided to replace the light entirely.

In August 1957, almost 106 years to the day since the light gave its first welcoming light across the estuary, Mr. F. H. Roberts, the last of a long line of keepers, left Chapman Lighthouse.  Within a few months no trace remained of that once proud, gaunt, red giant.