Thanks to Suzanne Scott 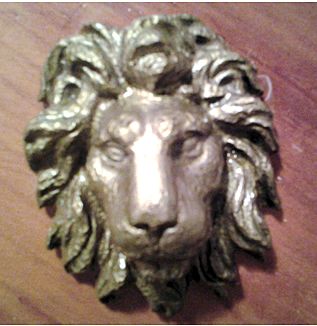 We have had several people tantalisingly tell us about the Lions of the Chapman lighthouse but no sight of them or further information until now.

Thanks to Suzanne we can now see for ourselves just what they looked like. Suzanne has one that belonged to her father and she tells us there were four. They are smaller than the size of a man’s fist according to the information given to Frank Whitnall by Horace Read, a local photographer who lived in the Village and was a frequent visitor to the lighthouse.

During our meeting, when he agreed to lend me a number of his photos of the Chapman Lighthouse he showed me his only souvenir of the old lighthouse – a small cast-iron lion’s head, smaller than a man’s fist, taken from some part of the dismantled superstructure.

We had contacted Trinity House hoping they could shed some light but they had no record of the Lions. So where on the structure they were remains a mystery. Can you tell us? Please comment below.