Article in the Buses Magazine June 1980

This magazine was lent to us by Castle Point Transport Museum. It contains this very interesting article about the museum.

In the same year, the Canvey and District Motor Transport Co Ltd was formed, inherit­ing most of the bus operations on the island from a consortium which had been formed by the island operators in 1918. The proprietors had rather grandiose ideas and lodged plans for an exceptionally well equipped bus depot late in 1934. The premises were officially opened in the following spring, providing interior parking for over 20 vehicles, together with a paint shop, four inspection pits, stores, offices and a large flat for the depot manager. In the ensuing years the depot was to have a succession of owners. The original company sold out within a year to become a subsidiary of the neighbouring Benfleet and District Com­pany, which maintained services on the island until 1951, when the BTC gained a controlling interest. The island activities then passed to local BTC subsidiary Westcliff-on-Sea Motor Services Ltd, a company that had previously tried to run services on to the island with little success. Further problems were encountered in 1953 when the east coast floods devastated the island, although the depot escaped lightly, and most of the buses were able to play their part in the evacuation of the inhabitants of the island. 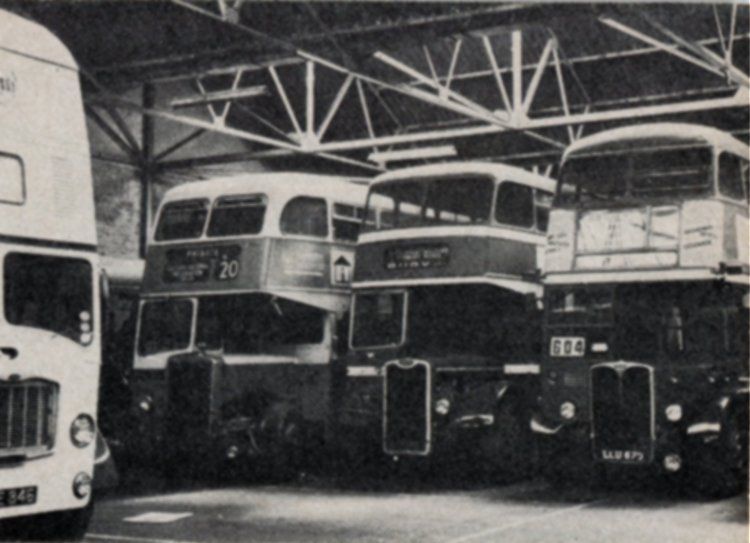 Inside the museum, showing a variety of buses at different stages of restoration

Westcliff ownership of the depot was to be short-lived; the red and cream vehicles disappeared in 1955 when the Eastern National Omnibus Company (the Westcliff-on-Sea par­ent company) merged the two fleets in con­junction with a renumbering scheme. Whilst Eastern National maintained the depot, it generally had spare capacity which was utilised for storing delicensed coaches in the winter and withdrawn vehicles awaiting disposal. In 1965, however, the Westcliff colours returned in the shape of AJN 825, a 1939 Bristol K5G which had been restored at the BTC museum in Clapham. It was handed back to Eastern National due to pressure on space at the museum. It was joined in 1971 by WNO 478, an open-top KSW5G, which was purchased by a group of drivers at the company’s Basildon depot—and so the Eastern National Preserva­tion Group was born. The company soon entrusted the group with AJN by placing it on permanent loan. 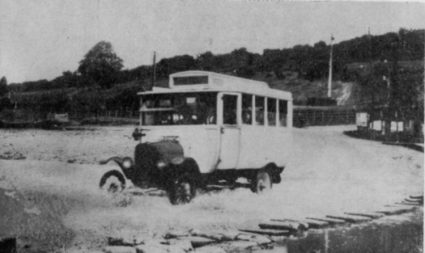 In the early days of Canvey Island bus operation, probably the early 1920s, a Model T Ford, ESH 1504 ( ?), splashes across the Benfleet causeway at low tide

The coaching activities of Eastern National were absorbed by National Travel South East in the early 1970s, and it was established that Eastern National would be prepared to garage further vehicles purchased by the group in the Canvey depot. The collection was to grow rapidly, and the number of preserved buses soon equalled the company’s official allocation of vehicles, although some were kept on the surrounding land.

In 1974 the group launched the first of its Southend Bus Rallies, which were initially held to raise money for the purchase and preservation of further vehicles. The state of the building had deteriorated over the years and rumours spread that the depot was to close. Operations finally ceased in April, 1978 when the final allocation of five Leyland Nationals and six semi-automatic Bristol FLFs was transferred along with the schedules to the neighbouring Hadleigh depot. The committee of the preservation group realised that Canvey depot would present a unique opportunity in the area to provide a safe home in which to preserve at least some of our public transport heritage. With this in mind, it was decided to try and purchase the premises and open them to the public as a transport museum. To achieve this aim, a separate body was set up, known as the Castle Point Transport Museum Society, which is a registered charity.

Eastern National initially put the building up for sale on the open market, while kindly allowing the group to remain in the premises on a tenancy at will. Detailed negotiations are now in hand to establish the best way in which the group may secure long term accom­modation in the premises. Subject to the raising of sufficient finance, it is still the intention of the group to purchase the freehold. In the meantime, the group has not been idle; a sales bus now visits all the major rallies and shows around the country, and the group’s fund raiser is beavering away to raise money. 1980 is the Eastern National golden jubilee year and the rally on June 1 will celebrate this occasion. 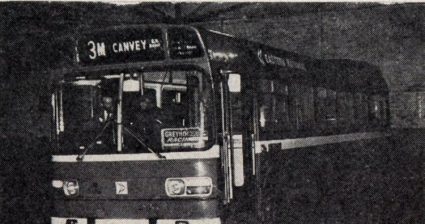 The depot is presently open on Sundays for interested parties to view the vehicles on display, which now total 34.   London Transport, London Country Bus Services, Red and White, Chesterfield Corporation, Eastern Na­tional, Southend Corporation, Moore Bros, and a host of small independents are represen­ted in the depot, although many vehicles are still in the process of restoration. The task is, however, an uphill struggle, as anyone involved in bus preservation will appreciate. In addition to raising the capital required to purchase the premises, the running costs have to be met and the vehicles restored to their former state.

In conclusion I must thank Peter Clark for his help with the historical information in this article, and in alphabetical order the following organisations that have given encouragement and assistance in the project to date: