and the striped buildings

When we first read the following excerpt from A Miniature Holland by Charlie Wyllie (The Graphic (London) Saturday July 29 1893) we were surprised that he called Canvey Village ‘The Hills’ and also his description of the wooden buildings being painted in stripes. Was this artistic licence we asked? We had not come across this before but as you can see from the pictures below it was fact not fiction.

‘At a little distance inland is the one village, called “The Hills”, apparently on the lucus a non lucendo principle, for there is not a hill on the whole island, and only-the most vivid imagination can pretend to perceive even a gradual slope up to the hamlet. Here, surrounding some ancient elms, there are about a dozen wooden houses, which include a comparatively palatial rectory, a school and several private dwellings, where the few visitors to the island stay during the summer.  The village church, originally built in 1712, but so entirely reconstructed in 1875 that scarcely anything of the old building remains, is also a wooden erection, and is painted a light French grey, relieved by narrow bands of lemon colour; and as the other houses, with the exception of one or two red-brick cottages, are also painted in stripes, it may be imagined that this zebraesque village is extremely quaint, not to say gaudy.’

The full text can be seen here. 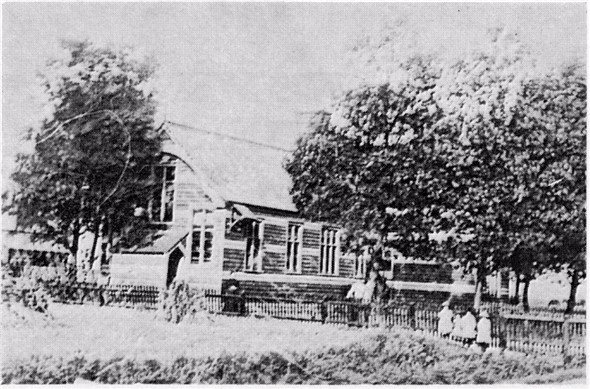 These pictures were taken during the same era that ‘A Miniature Holland’ was written and as you can clearly see the wooden buildings are indeed striped. 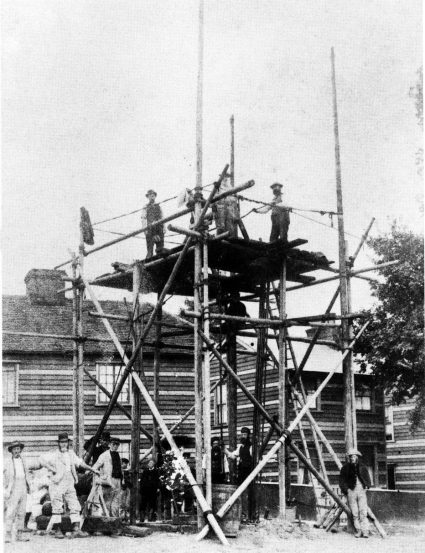 The construction of the Village Pump 1889

The picture above is of the main school building and the one on the left was taken when the new pump was being installed showing the buildings behind (still in existence today) clearly painted in two colours. What those colours were we only have Charlie Wyllie’s word it was French grey and lemon but as we can see they are definitely striped.

If you come across any more pictures of the village buildings showing this decor please email in.