You are here: HomenextPlacesnextSchoolsnextCastle View SchoolnextTeacher Mike on the home run

Teacher Mike on the home run

A charity run by a Canvey teacher was due to end this afternoon after 100 miles of sheer endurance. The Weston Spirit caught the hearts of children at Canvey’s Castle View School when their deputy head, 40-year-old Mike Hargate, volunteered to do the 24-hour marathon run. Set up by Falklands hero Simon Weston the charity aims to benefit underprivi­leged youngsters in inner cities. 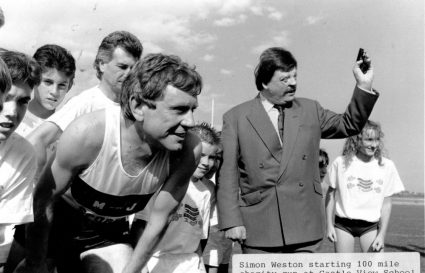 The school hopes to raise £20,000, which will go partly to the Weston Spirit and partly towards a classroom conversion and a new school minibus. Mr Hargate said he came up with the idea because it was bit different to the usual sponsored events, and every­thing escalated from there.

Simon Weston started the brave attempt yesterday afternoon, and was to wel­come Mr Hargate back later today. After a run round the field with 23 pupils, Mr Hargate ran through the night via Burnham, Woodham Ferrers, Battlesbridge, Hullbridge, Shoebury and Leigh. 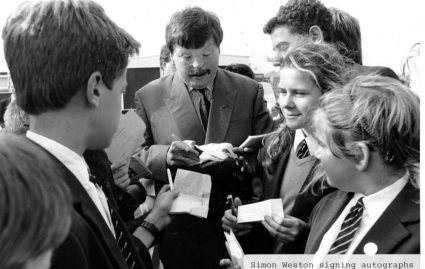 Dated 1989.Simon Weston signs autographs for some of the pupils.

Mr Hargate said he was feeling confident about fin­ishing after managing a 63-mile run in just one day. He will have a back-up team of four teachers in a minibus, plus a trained nurse and lots of glucose.

Simon said: “I think it’s brilliant. The school is get­ting a great deal out of it and it’s good for my charity to be involved with schools as well. We are all about young people getting on and believ­ing in themselves, and learn­ing that you will always help yourself by helping others. This is all a part of what the Weston Spirit is all about, never turning your back.”