As part of my Summer Challenge –“History on our Doorstep” – I decided to write something about my old school Leigh Beck Infants and Juniors.  I was lucky enough to interview Margaret Payne, a well known and well liked figure on the Island.  She was a pupil at Leigh Beck and later a teacher there.  I really enjoyed talking to her. 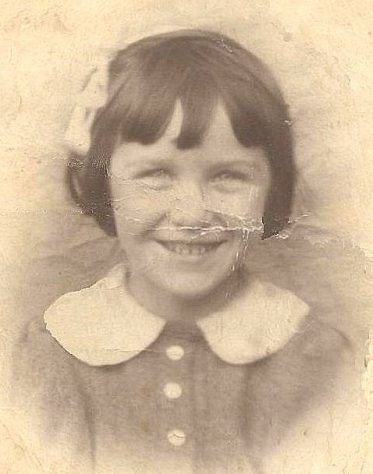 Margaret was always tall for her age and had floppy hair which she would tie on one side with a ribbon that had an annoying habit of slipping off.  She remembers every day as being bright and sunny.  Many people lived in wooden shacks and houseboats and there were very few motor cars.

The family home, where Margaret still lives, was in May Avenue.  There were ditches either side of the road, probably for drainage and behind their home were large open fields where Furtherwick School now stands.  There were remains of what seemed to be cow sheds on the fields and huge iron rings cemented into the ground for tethering animals.  The fields were owned by Farmer Cook who lived opposite May Avenue in a bungalow.  He sold eggs and would walk his cows past Margaret’s home everyday to take them to and from the fields for grazing.  He would carry a long stick and call out to the cows to keep them together. Margaret remembers playing in these fields with her friends once Farmer Cook had herded his cows off.  The children would look for fairy rings and play a game called “Wriggling Through”. 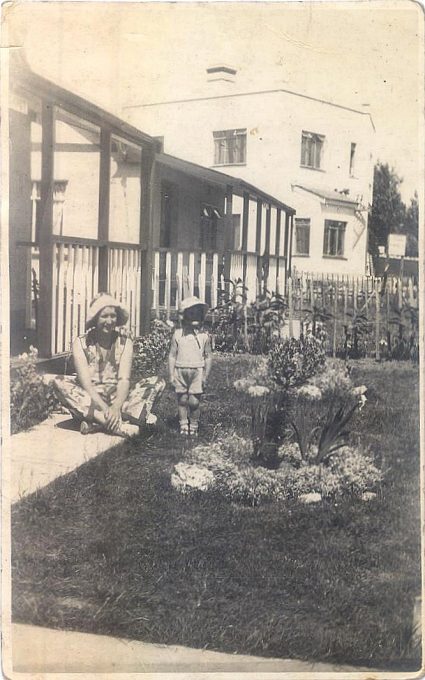 Margaret and her mother Alice outside their bungalow in May Avenue

Margaret was a pupil at Leigh Beck Infants from 1937 until 1939.  She said she was very happy there and was well liked.  As her maiden name was Greenaway the teachers fondly nicknamed her “Kate” after the author Kate Greenaway.

The Infants School building and immediately outside it with the wide pathway were pretty much as they are today.  The surrounding area was very different.  There were large fields and open ground where now there are many houses.  Margaret remembers a wooden fence surrounding the school rather than a metal one.  She is unsure whether or not the Bus Museum building was standing at the time as she cannot remember seeing it but there was a shop on the corner of Seaviews.  Margaret would make the long walk to and from school on her own.  She recalls that her mother only met her from school if they were going on to Southend.

The first person Margaret met at Leigh Beck was Miss Violet Verbina Vincent (Margaret remembers that Miss Vincent would sign notes at school 3V’s) she was the headteacher.  Miss Vincent took Margaret to her classroom and introduced her to her teacher Miss Price.  Miss Price was Margaret’s favourite teacher, “a really lovely lady”.

Miss Price was young, not long out of college and lived with Miss Vincent at her flat next to the Rio Cinema.  Margaret describes her as being very pretty and smiley and “full of vim and vigour”.  She would walk to school from Miss Vincent’s flat, down Furtherwick Road, along the seafront and turn up Seaviews to the school.  She would arrive every morning rosy cheeked with her curly, bushy hair all wild and windswept.  Margaret said Miss Price was “like an anchor” for her.  She never lost her temper and Margaret trusted her completely.

The classroom was light and airy.  The children sat at desks in rows of four.  There was a chart on one wall with a picture of a “shiny faced child” on it.  The caption read: Where there is dirt, there is danger.  Every morning Miss Price would call out the register then she would carry out an inspection.  The children would have to show they had a clean handkerchief for the day by placing it on the desk in front of them.  Miss Price would ask them to show her their hands, palms first and then the backs.  She would check that their hair was tidy and their teeth were clean.  One day Margaret had forgotten her handkerchief and the boy sitting next to her offered her a dirty rag to put on the desk instead.  Miss Price on seeing the rag asked if it was hers.  Margaret explained that it was the boys and he had lent it to her because she had forgotten her own handkerchief.  Miss Price just smiled and walked on.  Margaret remembers this fondly.

After the inspection the children would walk to the hall for assembly.  There was an assembly every day.  Margaret remembers them being very structured and organised.  The children filed in row by row and Miss Vincent would head the assembly.  They would sing hymns.  A hymn they sang often was “God Be In My Head”, this is a favourite of Margaret’s to this day.

The toilets were located outside the main school building in their own brick built block.  There was a roof in case of rain and the doors were all wooden with a space at the top and bottom.  There were no locks on the doors, possibly for safety reasons.  They were flush toilets which were considered a luxury rather than the norm.  The toilets at the other infants school on the Island consisted of a large bucket which the caretaker would have to empty and bury the contents of every day.

One of Margaret’s earliest memories of Leigh Beck was having a medical.  She hated it.  The doctor said she had to be put on glucose D but she cannot remember the reason why. 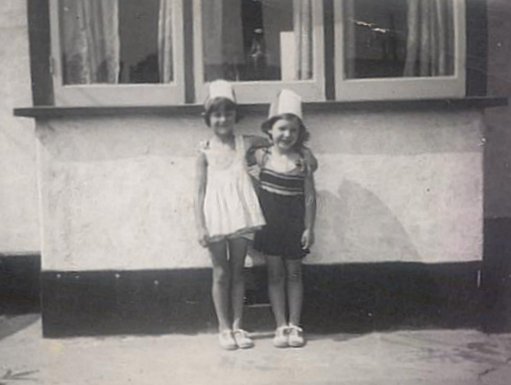 Margaret on the left outside the bungalow. May Avenue

She remembers the lessons being very easy for her.  Reading, writing and arithmetic were all very important and the teachers were competent.  Margaret’s favourite lesson was reading and she picked this up very quickly.  She remembers reading the book “Kezia in Search of a Friend”.  It was a story about a girl who left her bus fare on the table.  Another girl lent her some money and they became friends, meeting at the bus stop every day and every day her friend would ask “have you got your bus fare or have you left it on the table?”

Another story which captured Margaret’s imagination was the Greek myth of Persephone. In the myth Hades the god of the Underworld plants a beautiful shrub in a meadow to entice Persephone. Persephone on finding the plant pulls on the flower and in so doing opens up the Underworld. Hades charges out of the opening on his chariot and carries her off to be his bride. Margaret had been told the story at school and walking home that day she came across a hole with a pole in it. The hole was on the inside edge of the pavement and looked very much like someone had been pulling the pole back and forth, enlarging the hole. Looking into the hole Margaret imagined what it might have been like to be Persephone looking down into such a dark, scary place with Hades rushing towards her. 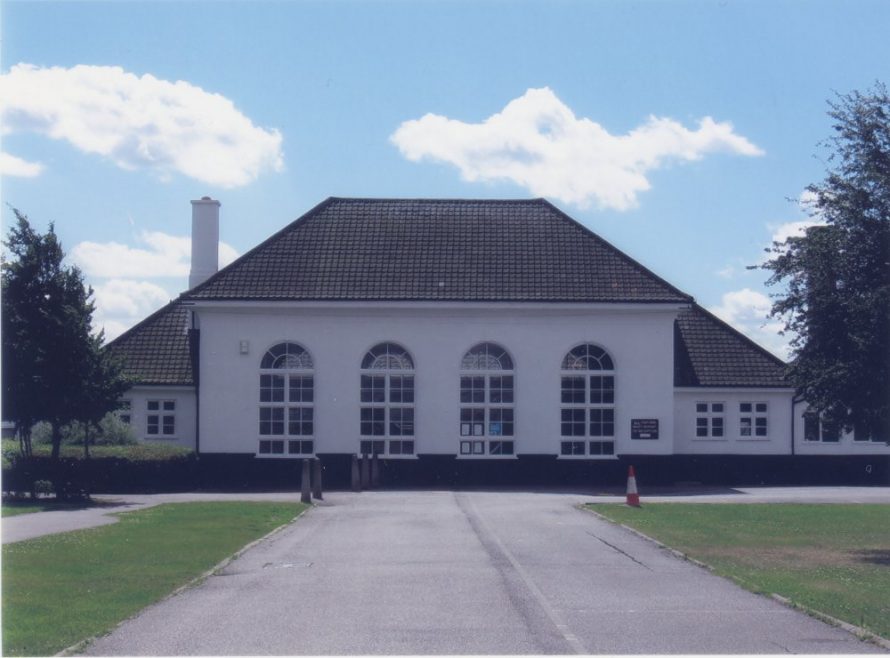 They taught percussion instruments at Leigh Beck Infants and would hold school concerts at the church hall (probably St Anne’s Church).  Margaret remembers dressing up as a Japanese girl at one of these concerts.  She wore a dressing gown and had a flower in her hair.  She was so excited about being on stage.  She was usually given the triangle to play and used to feel envious of the children playing the tambourine.

Another fond memory Margaret has of Leigh Beck is of falling in love at the age of five with a boy called Duncan Cook.  He was always very neat and tidy,  Margaret was quite in awe of him.  She said “he was like a little god to me, I used to think he needed a good cuddling”.

Margaret says her childhood was a very happy one and her time at Leigh Beck was no exception.  The children were on the whole well behaved and there was no bullying.  It just wasn’t something that happened.

She returned to Leigh Beck School in 1956 as a teacher and stayed there until 1963.  The headteacher at the time was still Miss Vincent and she remembered Margaret as being “Kate” the five year old she had taught all those years before.

As a teacher at the Infants and Junior School she still found the children to be well behaved.  She said the school tried not to remove any naughty children from the classroom.  “Gaining some insight into their homelife and circumstances usually helped” Margaret said. She also used to threaten wayward boys with a kiss if they did not behave.  It apparently worked wonders.  Margaret said her height was probably also an advantage as the children would have been more in awe of her. 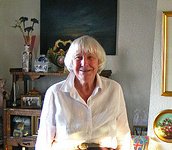 There was one particular girl who Margaret taught, who was having a bad time of it.  Margaret discovered that this young girl had no friends and this one christmas she had not received a single card from her classmates.  Margaret sent her to some of the other teachers with a note asking them to keep the girl occupied for awhile.  Margaret then used this time to rally the other children round to send the girl christmas cards.

I would like to finish by thanking Margaret for her time and for such interesting stories.  I would also like to thank my mother for her note taking and advice throughout this project.