My Memories of Northwick School 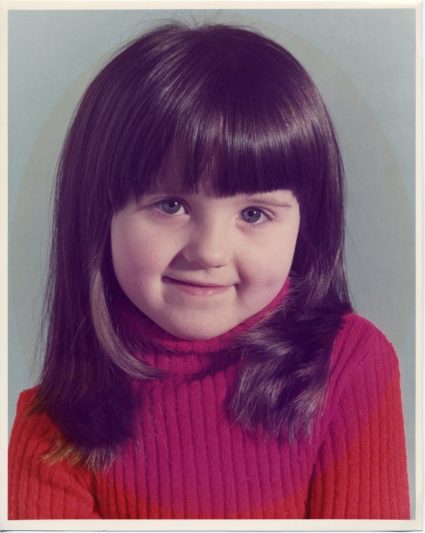 I started school at Northwick Park Infants School in September 1978.  My birthday being in October, I was only 4 years old at the time.  As you can see from my school photo we were not required to wear uniform.

My classroom that first year was at the rear entrance of the school.  It was part of the main building and its back wall ran parallel with the footpath leading up to the rear entrance door of Northwick Junior School .  The classroom had two doors.  One leading out to a quite open and bright room/corridor and the other was on the side of the classroom by a long run of windows.  It was a wooden door painted red and it opened out onto the smaller of the school’s two playgrounds.  It was through this door that we would enter and leave the classroom for breaks and home time. There were white painted numbers on the playground floor outside for us to line up in our classes each morning and after break. This smaller playground was exclusively for the use of the lower school, the older children had use of the larger playground that was next to it.

The classroom itself was very wide and was I believe shared by two classes.  It was not a very bright room and was quite noisy during a typical school day.  I’m not sure but I think there may have been a curtain that split the room in two some of the time so it could better accommodate two separate classes.  There was a Wendy house in the far corner and the desks were set up in rows rather than small groups.  There were many colourful posters on the walls showing simple addition and the letters of the alphabet.

The large room just off the classroom was kind of a communal area.  It also had windows facing the playground and another red wooden exit door.  The school’s library was in this room and it was where we displayed a lot of our work.  I can remember standing in this spot on several occasions during rainy afternoons, looking out at the puddles forming in the playground.  I was either day dreaming or working out how long before school would end and my mother would come to collect me.  I had probably been sent there to choose a book from the library.  We sat on the floor in this area every morning after register was taken to drink the milk that was delivered to the school for us.  Afterwards we would go to assembly in the main hall which was just through a set of double doors.

Our teacher that year and the following year too was Mrs White.  She was a really lovely lady, very patient and kind.  Her hair was short and had a naturally wavy curl to it.  She used to wear long flowing skirts and very pretty floral dresses with a cardigan over the top.  She was strict but never raised her voice.

My last year at Northwick, our class moved to a demountable building.  This stood along the path joining the two playgrounds.  It was quite a bright and spacious classroom and was surprisingly warm, even in the coldest of weather.  The wooden steps leading up to the classroom tended to get very slippery on wet and frosty days.  Our teacher that year was Mrs Colman.  She had very dark, almost black hair and was good at telling us stories.  She spent a lot of time hearing us read and taught us our first words in French.  On Friday afternoons our class joined another upper school class who were also in a demountable building.  The teacher there had a big atlas filled with colourful wildlife pictures.  Every Friday she would talk to us about a different country and we would learn about its animals and its culture.  I used to look forward to these afternoons.

Playtimes and the lunch hour were spent playing hopscotch, skipping and conkers.  We used to spin round and round to make ourselves dizzy and we created little plays based on our favourite fairy tales.  I always seemed to play the witch in these games, probably because of my long dark hair.  In our last year there we had started playing kiss chase.  Fortunately I only got caught once.

The head teacher of the school was Mrs Knapton.  She was also a firm but fair teacher.  Everyone liked and respected her.  She was always very smartly dressed, often in a blue or green suit comprising of a skirt and a short jacket (buttoned up of course) and a blouse with a big bow tied neatly at the collar.  Her hair was dark and neatly pulled up and back from her face.  Her deputy, if I’m remembering correctly, was Mrs Jill.  Mrs Jill had dark curly hair and wore glasses.  She was a very nice teacher as well and would often take the school assemblies.

The assemblies were held most mornings.  We sat cross legged in rows on the floor.  There was a kind of stage formed by large wooden boxes at the front of the hall where classes would sometimes give a small prepared performance and every Friday children whose birthdays it had been that week would go and stand up on this stage and tell us about their birthday presents etc.  We would then have to sing happy birthday to them.  We used to sing hymns during these assemblies and we were told the bible stories and stories with a moral at the end.  The music for the hymns was provided by Mrs Diamond on the piano.  Mrs Diamond was a much loved teacher.  She was a cuddly woman with a big infectious smile.  We all adored her.

The assembly hall was where we had most of our P.E lessons.  There were rubber backed mats, a vaulting horse and small hurdles made from two metal stands and a cane.  We also used wooden benches for step exercises and when turned upside down these were used as low balance beams.  A lot of the P.E. lessons were about learning balance and coordination.  We did simple exercises like walking around with bean bags on our heads to correct our posture.

Each Christmas we would have a tea party in the assembly hall.  All the children would bring in some party food to share and each class wore different hats made especially for the occasion.   One year my class made newspaper hats, another time it was Red Indian headdresses and the last year we made crowns from gold card and cotton wool.

It was the summer of 1981 that Prince Charles and Lady Diana Spencer were married and before our school term ended that July we were all presented with a Ladybird book about the Prince of Wales.  It was a pleasant end to a very happy time at Northwick Park Infants School .