The Beginning and the Ending

The following were sent in by Jill Burkett. They were two pages taken from a scrap book her husband bought at an auction. 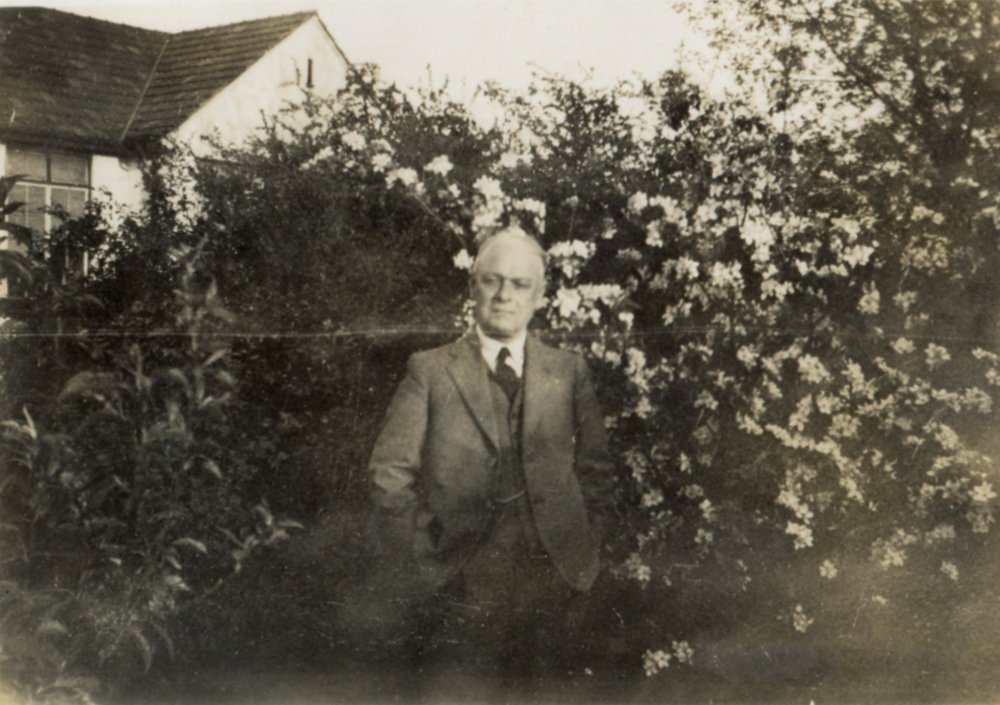 Mr William Dring Read in the school grounds at his retirement

The Chairman referred to the generosity of Mr. G. H. J. Chambers, the Chairman of the Parish Council, in presenting the site for the school, saying that in spite of many difficulties and delays they now had a fine and splendid building in which everything might prosper for the educational work of the Island. (Ap­plause.)

Mr. Hibbs expressed gratification at the grow­ing interest manifested in education, saying they had to consider their ideals in such work. In addition to the three R’s they had to make the children more efficient and able to take their part in industrial life. That was a work of the highest importance, but they had also to enable a child to attain the greatest amount of happiness in its passage through life. In years gone by they merely taught the children how to read, and to-day they were suffering because they had neglected to tell them what to read. Then their educational system should not only be in secular things, but it was a sacred duty to try to build up nobleness of character. He had very great hopes of that new school at Canvey Island and he trusted that it would indeed be prosperous. (Applause.) The man­agers were imbued with a very fine spirit and in appointing their new headmaster they set out to get the best man. (Hear, hear.) They thought they had appointed an outstanding man in Mr. Read, and in declaring the school open he hoped it would be successful under the care of the Rochford District Sub-Committee and the managers. (Applause.)

The Chairman having accepted charge of the school, Mr. J. H. Burrows said there was something which was ever old and ever new about Canvey—they were always expecting great things for the Island. (Laughter.) Sometimes he thought it was going to be an even greater seaside place than its neighbour, the County Borough of Southend, while there were others who looked towards industrial development. He congratulated them upon that school, which they might have had before the war but for opposition. Still, they now had the school, and when they got the bridge they would be happy. As they had two members of the County Highways Committee present no doubt they would not be allowed to leave Canvey without a solemn promise that they would get a bridge built the day after to-morrow.  (Laughter.) The bridge would be for Canvey and the neighbourhood, but the school was for their own children and the people who lived there, so that all would reap the advantages. They now had a Prime Minister who spent his early days in an elementary school and they might have more in the future; if so, why not for Canvey Island? (Applause.) He liked to think of that school as one in which the scholars would rise to high positions in the country, and that it would not be very long before they had a considerable number of candi­dates for secondary education. Thus it might be that Mr. Chambers would provide a site for a secondary school for the Island. (Applause.) They would find in Mr. Bell a useful servant and adviser in educational matters, and they were greatly indebted to Mrs. Robertson for her talented activities in the school hitherto. Mr Road, their now headmaster, came with con­siderable educational endowments, large ex­pectations and big hopes, and he hoped he would make a big success of that school. He believed they had a schoolmaster who would in a sense “give the right doses at the right time,” and was certainly a man of sound common sense. Education was what they imparted to the mind and it lasted with children all their lives. Boys and girls sent there would be better able to appreciate the world. They started early in life to learn to appreciate and realize beautiful things. They must give the head­master their support and in days to come the people who had been to that school would rise up and call him ” blessed.” (Applause.)

Mr. Lester Smith (Director of Education) also emphasized the necessity for parents to co-operate with the teachers. As Mr. Hibbs had said, the formation of character was most

important, and the growth of that school would be watched from day to day. (Applause.)

The Chairman also eulogized the valuable work done by Mrs. Robertson in the old school.

Mr. W. D. Read (Headmaster) said his aim would be to make the school the centre of child life in the Island. He already saw great pos­sibilities in Canvey and the children were the healthiest and cleanest-limbed he had seen. George Borrow had said East Anglians were the best Englishmen, and he felt sure the boys and girls of Canvey would grow up to be fine men and women. (Applause.)

Rev. E. Green, moving a vote of thanks to Mr. Hibbs and the speakers, referred to the early efforts to secure the erection of the school and the satisfaction which the managers felt at its accomplishment.

Mr. G. H. J. Chambers seconding, said the lack of the school had been a tremendous drawback in the past and he was only too pleased to assist in its provision. Concluding, he ap­pealed to the County Council for better moans of access to the Island, adding that they might see the day when Canvey might even be part of Southend. (Applause.)

Miss James also spoke and Mr. Hibbs, replying, promised his hearers as liberal a treatment in educational matters as possible.

During the proceedings songs and dances were rendered by the children under the direction of Mrs Robertson and Miss D. Hood.

The new school has been designed by Mr. J. I Stuart, F.R.I.B.A., the County Architect, the builders being Messrs. W. J. Cearns, of Stratford, ; and the cost £4,000. It stands on two acres of land and is a timber-built structure with stuccoed exterior. It is composed of a central hall and class-rooms accommodating 200 children. 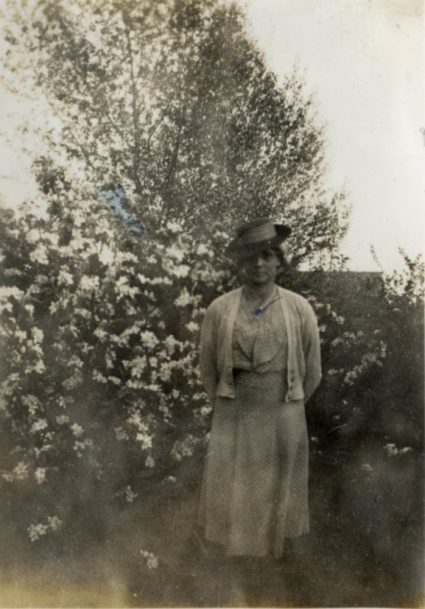 We think this must be Mrs Read

The Christmas holiday marked the retirement of Mr. W. Dring Read, headmaster of Canvey Island School, and completed an association, with education on the Island which dated from the opening of the first Council school there. Some of the older residents will recall that in the earlier days of the Island the Church provided the only school for Canvey children in a building now known as the Village Hall. An agitation arose for the provision of a Council school, and the buildings near the Island’s war memorial were erected. This was about 21 years ago, and, with its completion and opening, Mr. W. D. Read, from Birmingham, became the new headmaster. He has oc­cupied the position ever since. Mr. Read opened the school with 234 scholars oil the roll but by the end of the first week he had 275 names registered and before the first Christmas the total had reached 300. Then as the Island began to grow in popularity, more and more children entered, and in a few years there were over 800, a severe tax not only on accommodation but on the teaching staff, for the buildings were designed for just half that number of pupils. As a consequence the new school at Leigh Beck end of the parish was opened as an in­fants’ school, under Miss V. V. Vin­cent, and Mr. Read remained in charge at Long Road. This only served as a palliative, however, and as new estates developed around Southwick and Furtherwick, and the   Village population also in­creased, it was a matter of a few years before the numbers began to rise again, and once more, some years before the outbreak of the war in 1939, more spacious build­ings were provided, west of the original buildings. This time both infants and junior scholars were transferred, the old school being re­tained as a senior or secondary school under Mr. Read’s charge. Though there were some private schools existing on the Island in the earlier days of Mr. Read’s head teachership these gradually faded out and only one or two caring for very young pupils exist on Canvey these days.

Not only has Mr. Read served the Island well in educational matters, but he played his part in local gov­ernment and other walks of life. He was an early member of the Urban Council when the recon­structed road and the bridge were provided by that authority, and he was one who opposed the Oil Works coming into the district. Some years ago, when his health became affected by the heavy call of duty, he gave up this branch of his ac­tivity. A keen Churchman, he was for many years a member of St. Katharine’s choir, served on its Church Council with Mrs Read, and later became Vicar’s Warden, an office he still holds, whilst he is also the Lay Reader. He also joined the Island Rotary Club, has served on the local Food Committee, and assisted in various youth move­ments.

Past and present members of the teaching staff of the school during last week arranged a private social and supper at the Schools when Mr. and Mrs. W. D. Read were their guests. Dr. B. E. Lawrence (the Essex County Chief Education Officer) and Mr. Manns (the Divisional Officer) spoke of his services in highly appreciative terms. The Chairman of Canvey Council (Mr. F. J Leach) and the Vicar (Rev. A. J, Mortimer) were also present. Miss Vigg, senior assistant teacher, made a presentation of a cheque, and Mr. Read acknowledged indulging in reminiscences of his experiences. 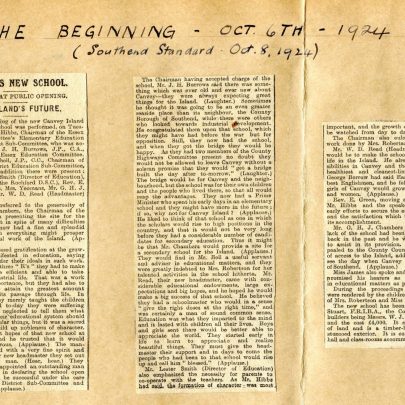 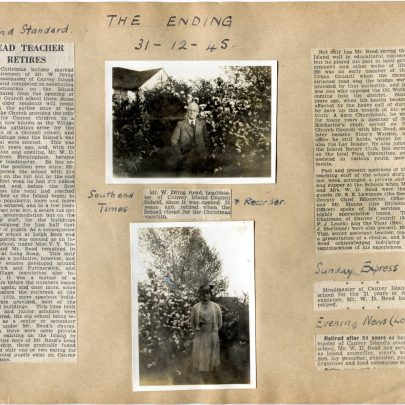