The following was published in several papers this is how it was done in the Reading Times, Pennsylvania in 1909.

A funny story is told by Rev. Watson Hagger, vicar of the little church on Canvey Island, situated in the Thames river. Here is the story as published by a London paper:

Put to that use when there was no Religious service

Owing to the presence of the fleet in the Thames, Canvey Island has had a great influx of good class visitors. Almost everyone visits the one little church with its many stained glass windows, which is famous for many amazing smuggling exploits.

The present vicar, the Rev. Watson Hagger, MA, relates how within the last half century, before he was appointed, the church was served from the mainland village of Benfleet. The bishop of the diocese had arranged for 26 services to be conducted during the year, intending, of course, that they should be held fortnightly.

Instead, however, they were held consecutively, so for six months of the year the church was never opened. Taking advantage of this extraordinary state of things, a band of smugglers used the building as a safe hiding place for storing kegs of rum, bales of tobacco, laces and other contraband goods.

Some of these daring smugglers are still living on the island today.

Not so bad after all: for smuggling is only one way of getting goods to the consumer by the cheapest process–just a little rebating scheme, the same as our American transporters smuggling their goods to consumers at the least possible expense in freight rates. The freight rates and tariff rates are similar when you pay them, and also similar when  you dodge them–you are taking advantage of other people when you do not pay full rates along with your neighbor.

Our rebaters and the smugglers of Canvey Island only differ in concealing their goods in the church. In the rebater’s case they did not think it necessary to hide their smuggled goods in the church, seeing as that they themselves were so snugly concealed in that institution.

And similar to the church on Canvey Island, the institution is closed to the public. Nobody has a right to nose into the affairs of a church or of church people in this country. They pose as strictly honest, and the people accept them as such! What a magnificent place to conceal smugglers and rebaters while they dodge the established rates. 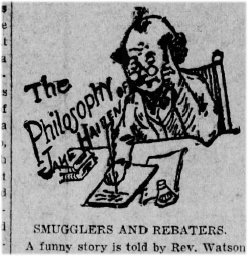