Canvey's Highway to the Future

This article was found in a booklet sent in by Jane Parkin. Wonder what happened to these plans in 1954 can anyone remember? Please comment at the bottom. 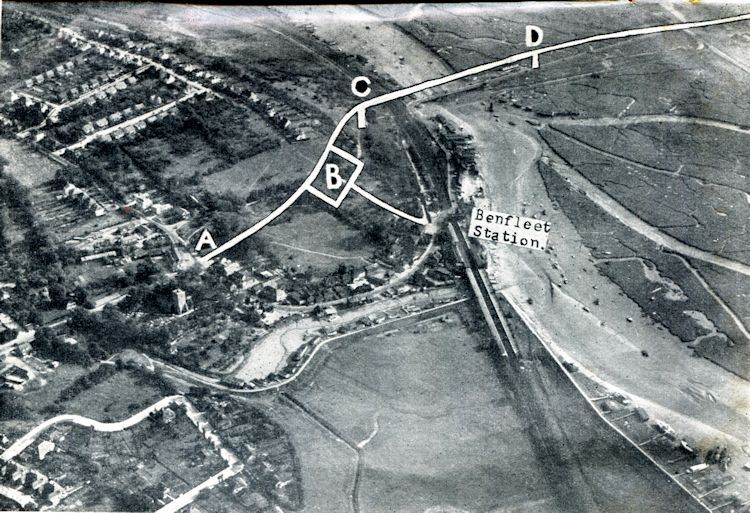 Canvey’s high level bridge. An aerial photograph of the position of the high level bridge as proposed by the County Planning Authorities. The line A, C and D is the proposed continuation of the London Road by the side of Westminster Bank over the Downs and then at high level from point C to D over the railway, the Benfleet Creek and saltings until it joins the main road again by Waterside Farm. This photograph was taken by Col. H. P. Fielder when an aerial survey was made of the whole of the Island for its post-war development. It is possible that the bridge will be completed within the next three years, and will run parallel to the existing swing bridge.

The high level bridge, no longer a dream, is in the Essex County Council’s Development Plan now deposited with the Ministry of Local Government.

It has been the aim of the Canvey Urban Council and local organi­sations to ensure that this new bridge, with its high level approach, is constructed in the quickest possible time to put the final seal on Canvey’s future prosperity.

Colonel H. P. Fielder, T.D., himself surveyed the area in 1949, and took photographs from the air and submitted them to the County Planning Authority and the Canvey Island Urban Council used these pictures in pressing their case.

This scheme, when completed, will by-pass the level crossing and the congested Ferry Road and with a clean, fine high approach road onto the main road of Canvey crossing the railway line and the creek at high level after passing through Benfleet Downs.

It is a major proposition and will probably cost well over £250,000, but the financial service of this loan is less than the cost of maintenance of the level crossing, the present opening bridge and the attendant costs of officials, the danger of the congested Ferry Road will be removed and the cost of its possible widening. This road would then become redundant for major traffic.

When the local authorities have proved this simple economic fact to the Essex County Council and other powers that control the destiny of Canvey, then will the flood gates be opened for an enormous surge forward in its popularity, both as a seaside resort and residential area and a district in which light industry can be served by a growing population in the country by the sea.