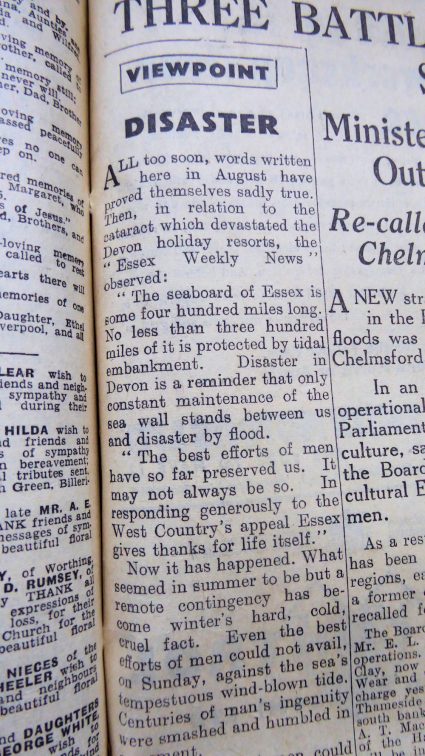 All too soon, words written here in August have proved themselves sadly true.  Then, in relation to the cataract which devastated the Devon holiday resorts, the “Essex Weekly News” observed: “The seaboard of Essex is some four hundred miles long.  No less than three hundred miles of it is protected by tidal embankment.  Disaster in Devon is a reminder that only constant maintenance of the sea wall stands between us and disaster by flood.

“The best efforts of men have so far preserved us.  It may not always be so.  In responding generously to the West Country’s appeal Essex gives thanks for life itself.”  Now it has happened.  What seemed in summer to be but a remote contingency has become winter’s hard, cold, cruel fact.  Even the best efforts of men could not avail, on Sunday, against the sea’s tempestuous wind-blown tide.  Centuries of man’s ingenuity were smashed and humbled in a moment.

It is clear that men could not have done more.  The sea wall was maintained at a height which would certainly have been proof  against the highest tide ever previously recorded.  But Sunday’s tide was almost two feet higher.

The latest chapter of Canvey Island’s history is a tragic one in terms of human suffering, but behind it stand years of successful human endeavour.  The island’s rise as a holiday resort and a place to live for thousands who worked in London was one of the romances of modern development in Essex.

Not until 1931 was Canvey joined to the mainland by a bridge over Benfleet Creek.  That cost £20,000.  Until then the only way of getting to or from the island was by ferry when the tide was in, or by stepping stone when the water was shallow.

The 4,500 acres comprising the island had until bridge came, been just a dreary expanse of marshland intersected by dykes, much as it was left by the Dutch engineers under Croppenburg, who won the island from the sea in the 17th Century.  Croppenburg’s reward was a third of the island.  There is still existing in the village a thatched cottage dating back to Croppenburg’s days.

The Dutchmen did their job well.  With the passing years, it has been necessary for the Catchment Board to strengthen the sea walls, but much of the original work remains.

The building of the bridge gave a great impetus to development.  Dissatisfied with Rural District Council government, the islanders succeeded in obtaining urban status in 1926.  The first task of the new authority was the construction of a good road, to replace the track from the Creek right across the island to the Point at Leigh Beck.

One after another the amenities of civilisation were painstakingly added.  It was not the fault of the islanders that schemes for a high level bridge to the mainland, a pier, and a railway from Benfleet remained on the shelf.

Canvey’s progress has now been checked for an indefinite period.  But the wall will be restored .   The inlanders will return.  What they have accomplished in the past may be regarded as indicative of what the future may hold.  There is an aptness in Tennyson’s lines in “Locksley Hall”: –

Men, my brothers, men the workers, ever reaping something new.  That which they have done but earnest of the things that they shall do.