You are here: HomenextHistorynextAll Your MemoriesnextClary Swann's memories of the Monico and CasinonextThe Hotel Monico 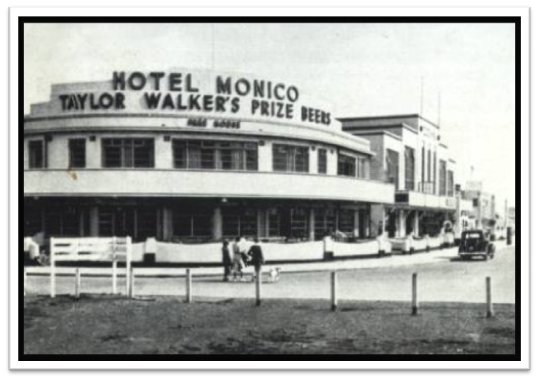 Ever since I came to Canvey the Monico has not had the best of reputations. After recently reading an article in the Essex Countryside about the ‘Thames-side Taverns’, dated 1969 where Glyn H Morgan described the Monico, whilst comparing it to the Lobster Smack Inn, as follows:

‘The Monico, however, would not have been known to the old master (Dickens), being of fairly recent construction. It is in a more populous area than the Smack (Lobster Smack) and its decor is, not unnaturally, more in keeping with a modern building. They do have two things in common, however: they are both Charrington houses and both serve meals and snacks. The Monico, too, has a unique privilege, enjoyed as far as I am aware by no other inn in the country: by an agreement with the Port of London Authority its illuminated sign is kept on long after closing time in order to act as a navigation aid to Thames shipping.’

This was something I had not heard of so I decided to investigate the history of the Monico and see what I could find. So far I have not confirmed the statement Glyn has made above regarding the sign but I have found that 70 years ago the Monico made history of a different kind.

The Monico was built in 1938 by Mr A H Beaumont and opened on the Wednesday just before Easter of that year, by his daughter Gladys. It had taken just ten months to build and complemented the Casino which was also owned by Beaumont. The Hotel was built on the corner of Furtherwick Road and Promenade Road (now Eastern Esplanade). 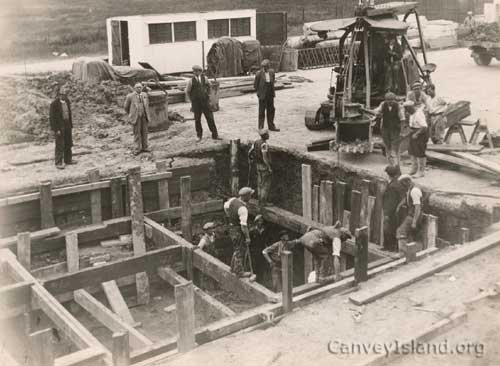 The cellar under construction

Because of the close proximity to the beach (only 75 yds) and the fact the cellar would be 16 feet below the high water level, special planning permission had to be sought before work could begin. The first job was to dig out seven thousand cubic yards of soil from the site and quite amazingly not one stone was found. The cellar was basically built as a ‘Tank’ with work being done to make it waterproof. The floor was made from 15 tons of railway metal with twist steel fabric, some 10inches thick plus cement. The walls were asphalted 18inches thick with the ceiling giving 8 feet of headroom being made of reinforced concrete. In all 25,000 bricks were used. 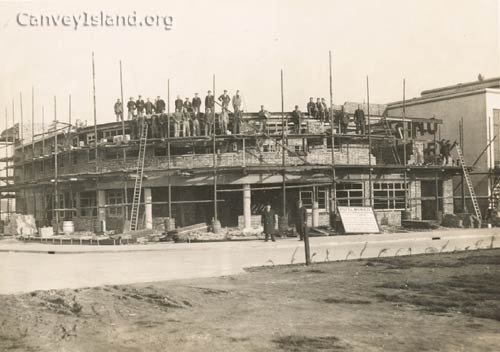 The construction of the main building

The main building was semicircular in shape and built on a ‘Raft’, which is common practise today on Canvey. Over 200,000 bricks and 230 tons of steelwork were used in the building with thousands of oak blocks for the flooring. The walls above the balcony were rendered in snowcrete with frost proofed tiles below.

On the first floor a sun balcony was included in the design which followed the full curve of the building. On the roof was a ‘roof garden’ this was 125 feet by 85 feet with room for a badminton court and ball games. The most notable ingredient in the new hotel was the gas central heating which was the first central heating installation on the Island.

The central heating was run by an automatically controlled gas fired plant. (A Potterton ‘Rex’ No2 series with an output of 288,000 B. Th. U’s per hour) This was situated in the boiler house at the rear of the hotel. The hot water was supplied by a separate Potterton ‘D’series boiler.

There were radiators in every room which were finished in gold. There was hot and cold water to all the bedrooms including staff rooms. Points for gas fires were also installed in every bedroom. Special switches for the lighting were installed with switches for both electric and gas lighting in case of power cuts. The dining room/restaurant had a pipe coil round the central skylight to stop down drafts. 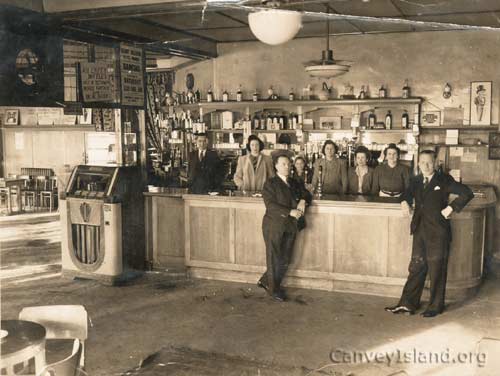 On the ground floor we find the kitchen which is tiled to ¾ height and boast not only gas cooking but also gas refrigeration.

At the front of the building are the bars. At the north side is the Office licence, then the public bar which was 50ft by 50ft, which was said to be one of the largest in the country, a private bar, 36ft by 20ft and facing south the saloon bar 26ft by 19ft which also had a children’s room, in all 185ft of serving space.

The dining room with its central skylight was to the rear of the bars and could seat between 80-100 people. The décor was light oak panelling and Wilton carpets throughout with a magnificent oak staircase leading to the first floor.

On the first floor were 25 guest bedrooms, 12ft by 10ft, a guest sitting room, 19ft by 12ft and Mr Beaumont’s office, which was panelled in Birds eye maple and black walnut. At the rear of the first floor were the single staff bedrooms. The staff also had their own lounge and dining room. Altogether there were 4 bathrooms and 17 lavatories in the building.

As much as possible local labour was used. The Clerk of works was Mr H J Wade a well known local Canvey resident.

The hotel was eventually sold in 1946 to Messrs Charrington, the brewers, for the reported sum of £68,000. Mr Beaumont invited 80 friends for a farewell party where they presented him with a solid silver tray.

No mention has been found of the hotel being a ‘navigation aid to Thames shipping’ but because of the seawall being raised twice since the hotel was built it is now very unlikely it could even be seen from the water.

It is thanks to the Swann family, who have been associated with the Monico since it was built that we are able to know so much about the construction of the Monico. 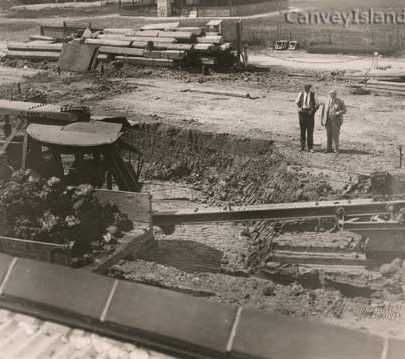 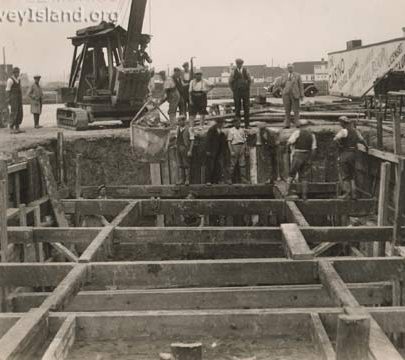 The cellar under construction
The Swann Family © 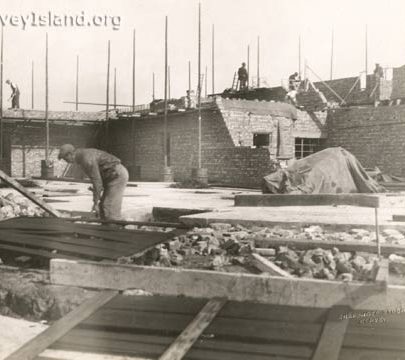 The hotel above ground level
The Swann Family © 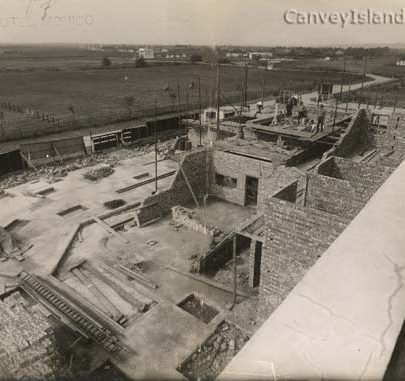 The walls of the hotel begin to rise
The Swann Family © 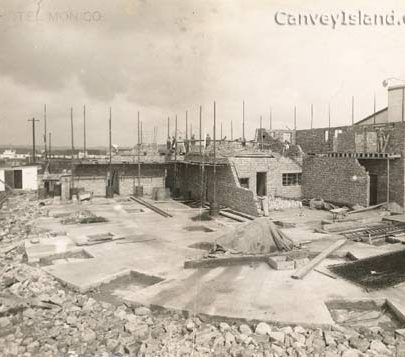 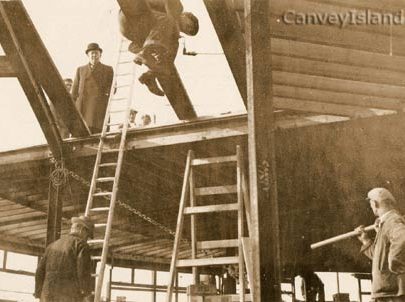 The first floor. Mr Beaumont is the man wearing the bowler hat
The Swann Family © 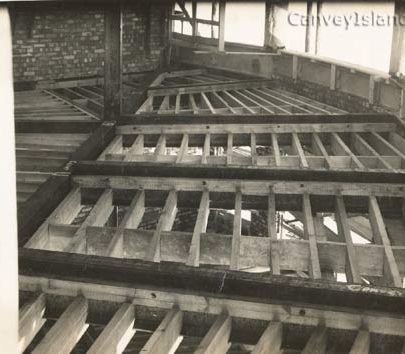 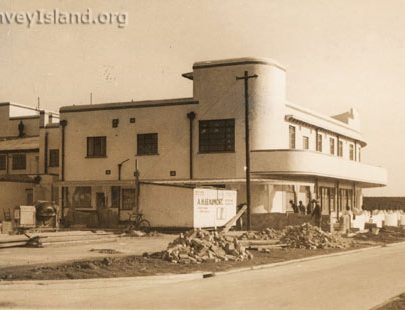 The north side of the hotel
The Swann Family © 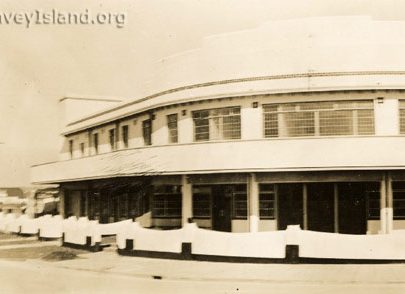 The finished hotel
The Swann Family © 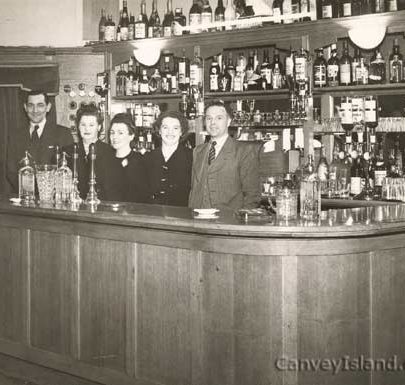 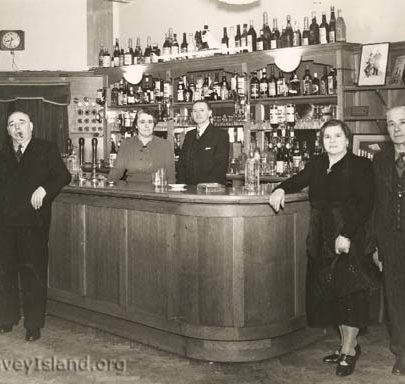 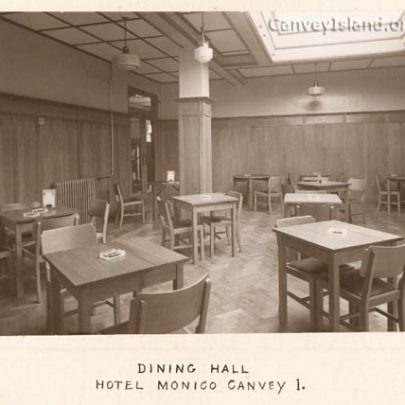 The Dining Room showing the central skylight
The Swann Family © 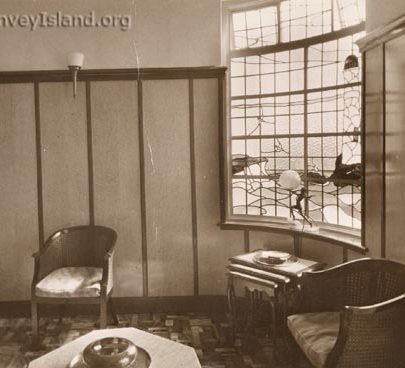 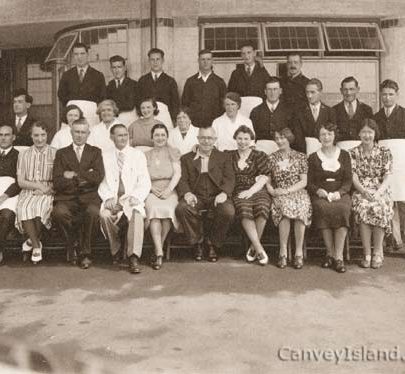 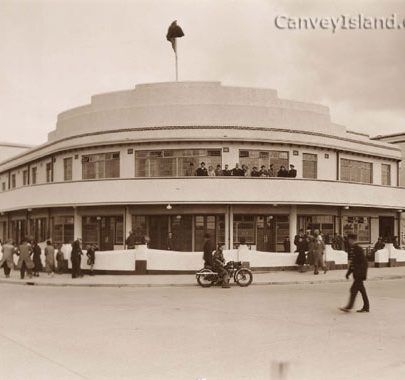 The final product
The Swann Family © 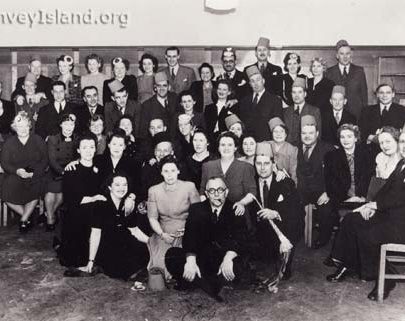 1946: Farewell Party at the Hotel Monicoto celebrate its changing of hands
The Swann Family ©