You are here: HomenextHistorynextAll Your MemoriesnextThe year was 1935nextA Holiday in South Eastern Essex

A Holiday in South Eastern Essex

Where is Misty Moon Marsh?

A wonderful collection of memories, postcards, photos and drawings by a young girl who spent her summers on Canvey and explored the Island and surrounding areas. The year we are almost certain is 1935. Below you can read about her holiday, illustrated with some of her drawings and newspaper clippings.

Where is Misty Moon Marsh? 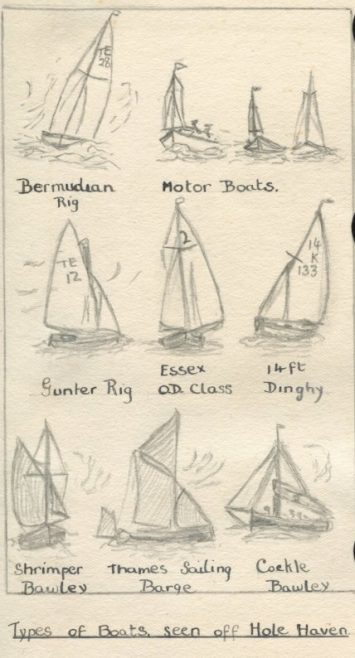 It lies somewhere in that ‘recondite region’ of Half Moon Creek, which is connected with the river Ray. At the quiet village which overhangs the winding creek intersecting the salt marshes, nothing seems to be doing, for the tide is out. A few boats and craft of the humbler sort lie on their sides on the mud bordering the slender ribbon of water, tributaries of which form mooring places for two or three house-boats. Further along these tributaries squeeze out into a sort of ditch with here and there disused kettles and broken pans. On the shore the square tower of St Mary’s Church dominates the village street, with its tumbled group of picturesque sixteenth-century houses. Everywhere is heard the shrill screaming of the seagulls, as they paddle about in the mud looking for insects. This is the sight that greeted my eyes as I walked from Benfleet station, to my home at Canvey.

The day was extremely hot and the marsh was shimmering in the heat, like a mirage seen through a veil of vapour. A few ruminating cattle and hoarse soaring seagulls were almost the only living creatures in sight. Myriads of insects hummed out a monotonous cadence. Stranded on the mud in the distance was a good-sized barge with its sails slewed up, apparently tenantless. Further away still nearer the seawall lay an old wreck, it has been laying in the same place for ages and belongs somehow to that scene.

It is getting late, so I walk more briskly, for there are no lights on made up roads on our part of the island. Evening is falling fast and the sun goes down in a stormy rent of fiery clouds. A chill breath from across the water makes itself felt, and I hear the steady tramp of the village policeman. I watch him plodding slowly into the twilight while away behind me a faint mysterious radiance over the hills, indicates that the moon is rising. An owl is hooting somewhere, and a foghorn is heard from the river. Ruddy lights appear from the windows of the Hoy Inn Benfleet. The air is getting chillier now, and I start off once more at a jog trot for home and supper. 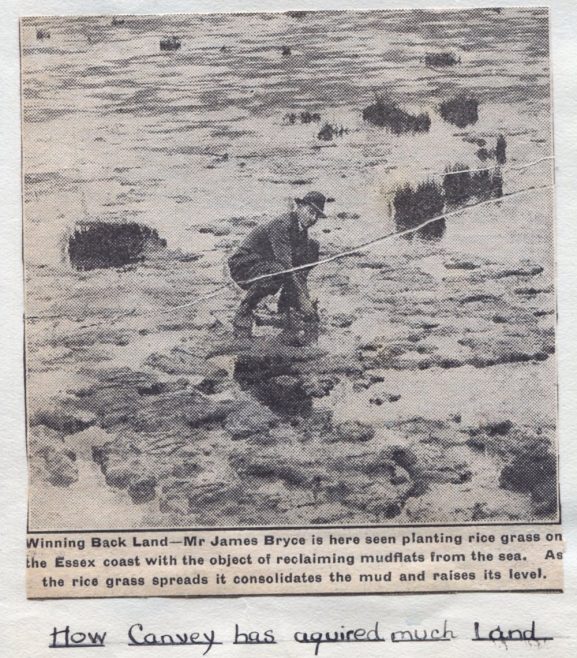 Canvey was reclaimed from the Dutch in 1620. It is still included in the Essex marshes. These consist of extensive tracts of land protected from the sea by sea walls, constructed of mud and stones. They are chiefly under grass and are intersected with ditches known as dykes or fleets. Canvey’s fleets are very deep and woe-betide anyone who is out after dark, for if he slips into a fleet he is a dead man. Canvey is noted for its saltings. These are salt marshes which are covered at high tide. The tide leaves little thin films of sediment on the tops, and the saltings are gradually raised until in the end the sea may be drained. Rice grass is also used for reclaiming purposes. It grows and spreads and forms the soft mud into a hard mass, and then the water is drained away.

The Dutch have left many reminders. There are two Dutch cottages, both dated 1621. They stand today so firm and weatherproof as when they were built. One of them stands in the old Dutch village. This is still a quaint old place, with the pump in the middle of the road. Facing it is the Old Red Cow where all the old men of the neighbourhood gather and shake their heads over what the world is coming to. It was here that I had an amusing conversation. I had made the acquaintance of an old man, who told me he had been a great traveller in his time. That is very interesting I said and of course I wanted to hear about it. I asked him if he had been to Norway. “Norway – no” he said “but I’ve been to Suffolk I have twice I’ve been to Suffolk.” I was thinking about his great journey and he mistook my silence for admiration and started telling me all about it. 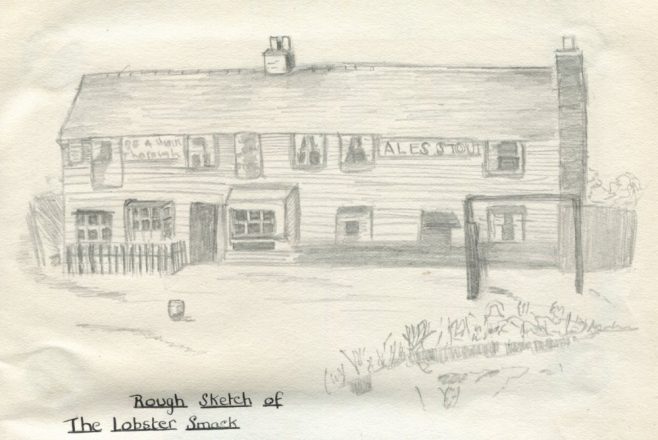 The inn that Canvey is famous for is The Lobster Smack. I have sketched it on the next page. It was built in 1563, before the island was drained. At high water it was surrounded, but the inhabitants were pleased at the isolation for they were smugglers. A good deal of smuggling still goes on at night but of course nothing like it did. The smuggled goods were spirits, snuff, tobacco and silk. The smugglers were seldom caught, if attacked they generally won the fray. Just by the side is the old time lookout. I tried to get on the roof for a good view of Chatham but it gave way, if they didn’t keep it in a better condition than that there wouldn’t have been any smugglers left. A few of their old belongings were there, so I grouped them as well as I could and drew or tried to draw them. 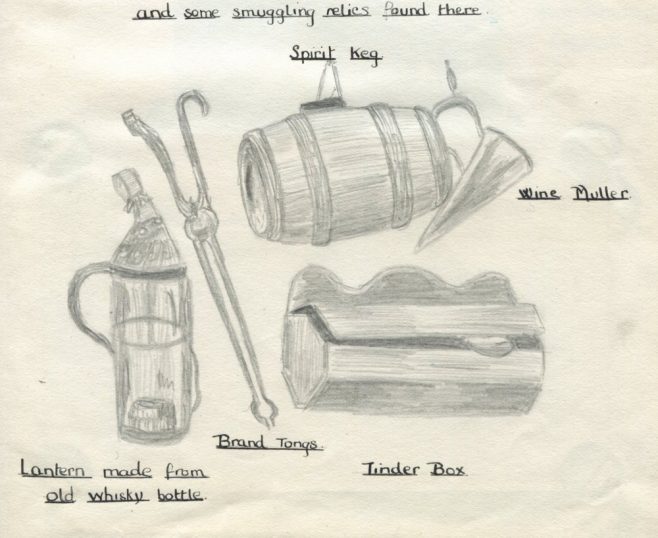 The Lobster Smack is situated at Hole Haven. There is a wonderful view of the shipping from here. Some people wish that there wasn’t. I do love boats so, that nobody can get me away. I have tried to draw a few, as well as the silhouette of a drifter in this book. On a clear day the view is very grand from here. Looking west, Tilbury may be seen and just near – Thames Haven, an island covered with Oil Tanks. There was an explosion there once, and the blaze could be seen from Grain Fort, Allhallows, Chatham and Sheerness. Grain Fort is an on the Isle of Grain just by the mouth of the Medway, Allhallows is a rustic town on the coast with a 14th century church. There are nearly always battleships anchored in the mouth of the Medway. These and those off of Sheerness whose steep cliffs guard the entrance to the Thames are always firing at this time of year. The North Downs can be seen purple in the distance above the first range of hills.

Canvey used to have a ferry, but alas that has gone now, and we have a sliding bridge. It is useful in one-way – it makes a good place to dive from. In the old times the water would be too shallow for a boat and too deep for the stepping stones, and it used to be tiresome if one had a train to catch. The current here is very strong. Some years ago a lorry got stuck in the mud, and the tide came in and carried it past Benfleet, and then carried it out to sea. Coming from Benfleet to Canvey, to the west is Northwick. This is a very desolate area, half the size of the island. There are only a few derelict farms and ruminating cattle, it is to me the best part of the island. Along the seawall the purple sea lavender grows, and fluttering around it in hundreds are mauve butterflies. It is absolutely unspoilt for nearly five square miles. 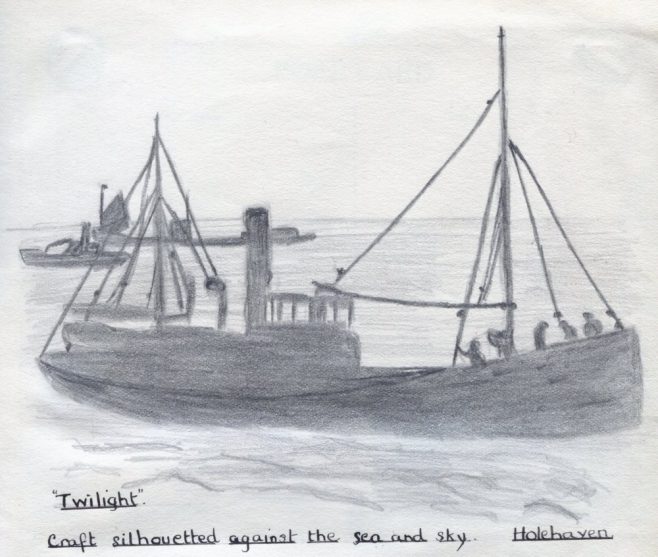 Canvey has its populated side at Shell Beach. Here there is a casino, one of those buildings which spoil the landscape. The bungalows here at Leigh Beck have water and electric light, but our bungalow, except for the farm and three others have not even a made up road, the nearest one is a mile away.

Near home is Waterside Farm. I took my retriever Rex away with me as well as my cat. I took Rex out for a walk and he disappeared. Suddenly there was a terrible commotion. He chased a cow right in the door of the farm, then he chased all the geese in and out the back door, with the farmer and his wife behind, and so into the pond. The farmer Mr Leach was in a terrible temper. His wife threatened to ring the police and I got into terrible trouble. Someone stole him the week after, perhaps it was a good thing, because he got me into enough trouble. One morning I took him to the marshes. There was an old tin can in the mud and he thought it was a salmon tin. He put his paws on one side and the other came up, and so on, and he barked and scratched up the mud it was so funny to watch him.

Essex has a plaque of ants this year. I was just drawing a yacht when there was a terrible noise on the roof. I thought it was a storm but it was clouds of black ants falling down. They swarmed over everything and the ground was black with them. After a time however, I suppose they got tired of their surroundings and they went away. 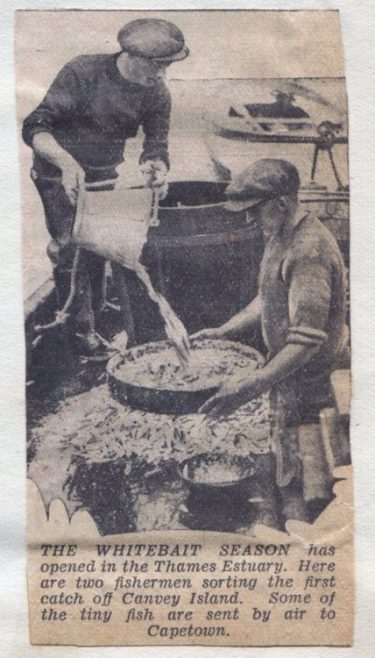 There is a wonderful view from home. If one looks due east, the end of the pier may be seen on a clear day absolutely level with our door. Beyond it on the coast is Shoeburyness, Thorpe Bay cannot be seen as it is right in a bay. Southchurch and Southend are very clear, and St Clements at Leigh stands out above everything. Our bungalow just faces Hadleigh Castle, the hills round about are very beautiful here. On the top of the hills there are always horses standing as if carved out of granite. To the North West is Benfleet a sleepy old town, and further along, the hills curve round and Laindon, Hordon-on-the-hill and Stanford le Hope are seen.

The Ray is only a field away from home. This is admirable river for yachting and if one knows the currents, for swimming. My friend owns a 14ft International dinghy. He belongs to the Benfleet yacht club and goes in for racing. Whenever the tide is in we are out on the river if is raining or not. I think sailing and swimming are the two best sports, and they can both be enjoyed together. It is a lovely sensation to dive from a yacht that is sailing along, and great fun getting on it again.

I left our gate open one night and in the night I woke hearing an awful noise – a cow had put her head in at my bedroom window and was expressing her surprise. The next night my mother woke ne up and told me to dress as the seawall was on fire. The grass was terribly dry and the mustard was simply brown. It was a beautiful night. Myriads of stars twinkled overhead and the lights at Southend twinkled like the stars above. About 300yds away was one mass of flame. I thought our home was doomed for the only water we had was in the well and water butts for we had to walk ¾ mile to get our own drinking water. A train happened to go by and we noticed it passed in front of it. We were safe it was on Hadleigh hills. The next morning we were told that it was seven hay stacks, the Salvation Army Colony and a straw stack – it was a terrible fire.

Canvey looks absolutely different from the train, it looks flat and uninteresting, but if one knows it as I do it is a fascinating island.