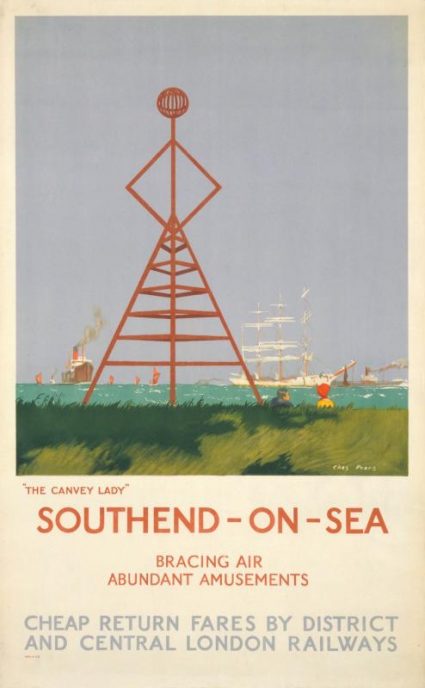 Whilst looking for paintings of Canvey by Charles Pears I can across this poster where the art work was done by Pears in 1926. It has the strange figure in the foreground named ‘The Canvey Lady’. I was intrigued, what was it? Where was it? Why was it?

Graham Stevens came partly to the rescue. He knew where and that there were two of them, one was at Thorney Bay and the other was to the North East of the Island. He did not know what they were but remembered there was one in the picture of the towers at the WW2 Army Camp in Thorney Bay which is the second picture.

All we could come up with was that it was something to do with navigation.

So I got in touch with Mike Millichamp who was very helpful when I was writing the page about the Chapman Lighthouse and he came up with more answers.

Mike says it is a disused beacon.

His 1914 guide says “Canvey Island – 2 beacons; not in use for navigation. Stony Point –  a beacon with a diamond shaped head surmounted by a ball; elevated at 58 feet“

His 1948 guide says about the same as above but adds “at Deadman’s Point, western entrance to Thorny Creek“

His 1950 guide makes no mention so he presumed it had gone by then.

So the one we have in the two photographs is the one mentioned in the 1948 guide at Deadman’s Point. (Thorney Bay)

‘Stoney Point’ would that be The Point?

It seems a strange subject for any artwork, even a promotional poster and especially with the beacon being so prominent. But I can see why it was called ‘The Canvey Lady’

Thanks to Mike for his help and thanks to the London Transport Museum for allowing us to use the poster.

More about Charles Pears can be found here

More about the Fort can be found here 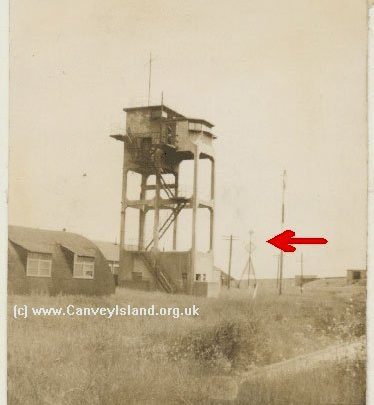 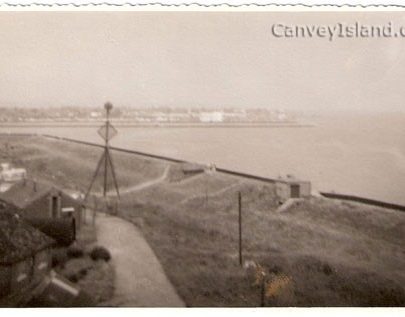