You are here: HomenextArtsnextArtnextVic EllisnextMy collection of Vic Ellis' paintings

My collection of Vic Ellis' paintings

and when I met him

Note:- Vic Ellis was a dental technician on Canvey Island and was given drawing and painting lessons by Harry Russell.

My father and I took up painting, very much as amateurs, in the mid 1960s, when he retired and joined me in Southampton. My father became a competent portraitist, but I was more interested in landscapes. However, we were both amateur yachtsmen and enjoyed marine paintings, and used to make trips to London together to the exhibitions of the Royal Society of Marine Artists – held I, seem to remember, in the Guildhall. It was there that we first came across the work of Vic Ellis.

I was very impressed by his work and bought a small painting. I obtained his address and, a few months later, made a visit to his home, where I met his wife, Bunty, and bought more paintings. 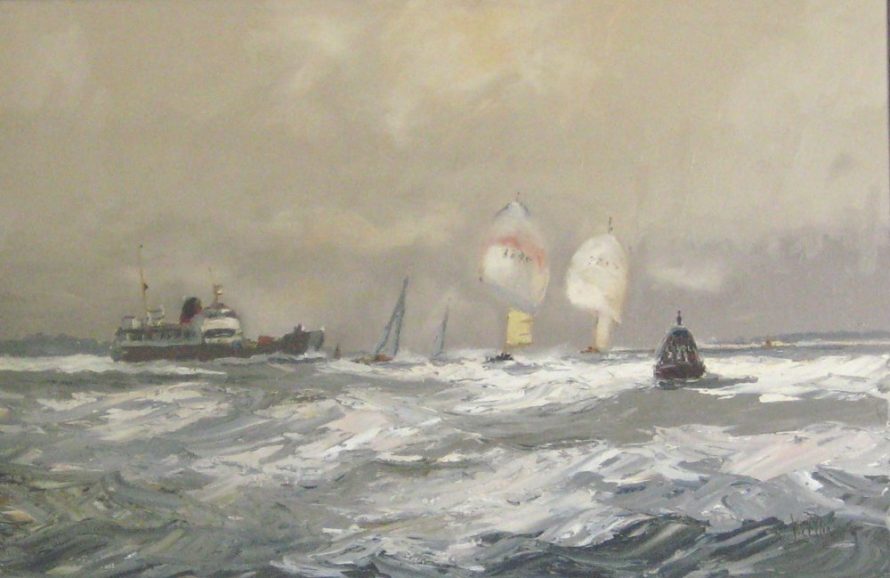 I suggested that he might like to experience something of sailing on the South Coast, – very different from the East Coast – and I invited him to to spend a few days in my holiday cottage in Cowes in August 1969. We did some day’s sailing trips in my small cabin cruising yacht, but stayed within the Solent. Whilst with us, Vic set up his easel in the back yard of my cottage, and one of my photos is of Vic painting an impression of the Red Funnel ferry crossing from Southampton to Cowes. This he gave me, and it is one of those I include on this page. 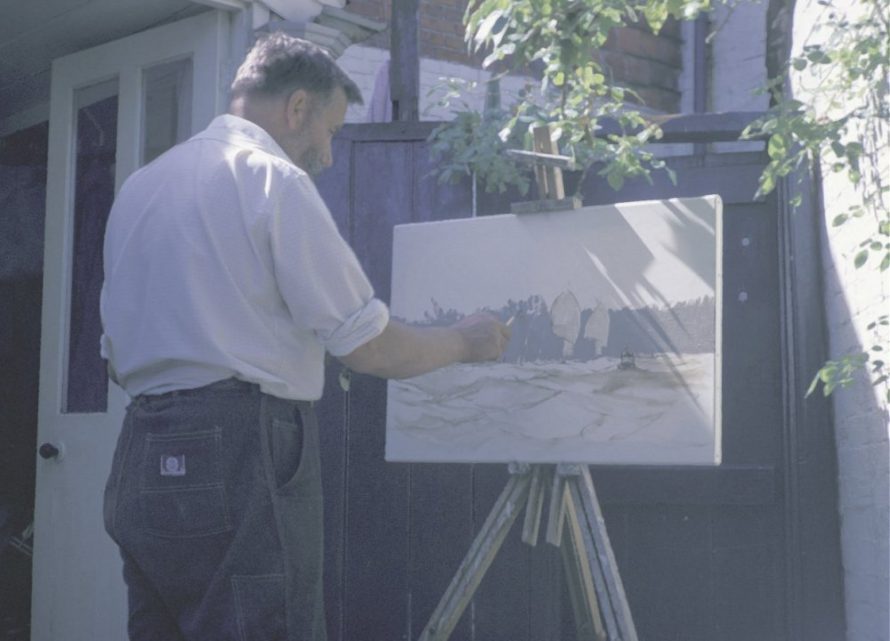 At the time I was chairman of the Southampton Art Society, where from time to time we had artists visit us to give demonstrations. I suggested to Vic that he might like to do this for us, and he readily agreed and came down again in the late autumn of 69, staying in my house. He was much appreciated by the considerable turnout of members and guests we had on that occasion. I think, although I am not sure, that he exhibited a couple of works in our Southampton Society’s annual exhibition, called ‘Painters Progress’, at the City Art Gallery in the following year. 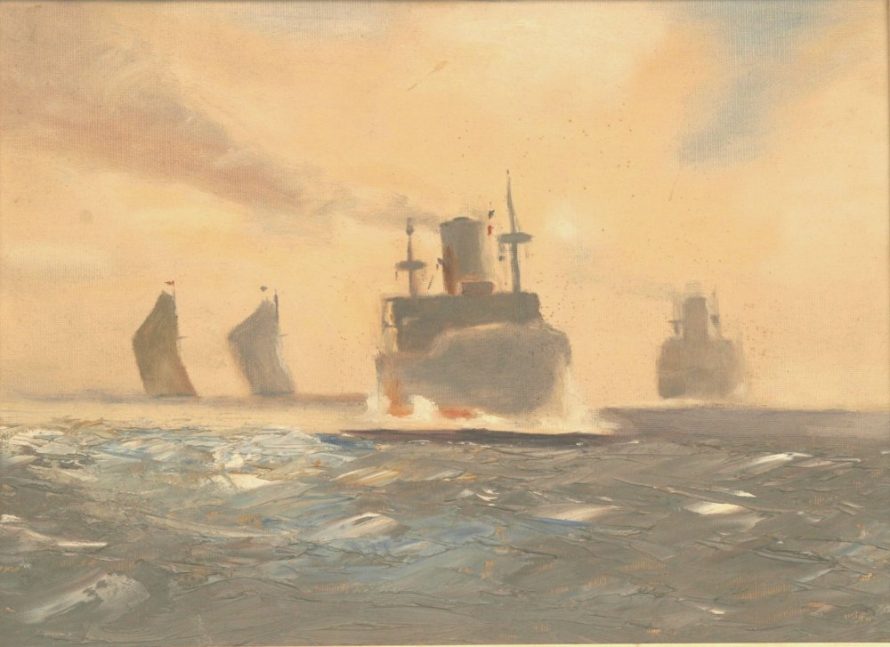 In all, I have seven of his paintings, including the ‘oil sketch’ he did as a demonstration, plus a photo of him painting in Cowes. Vic explained to me how he obtained his ‘sea effects’ by a minimal mixing of the remaining colours on his pallet and putting the result on the canvass with a pallet knife. I found this very instructive and, although I could never reach his standard of work, it did enable me to improve my attempts at marine subjects. I have included one of my efforts, but only to show Vic’s influence.

I should love to know whether there is a ‘collection’ of his work anywhere. 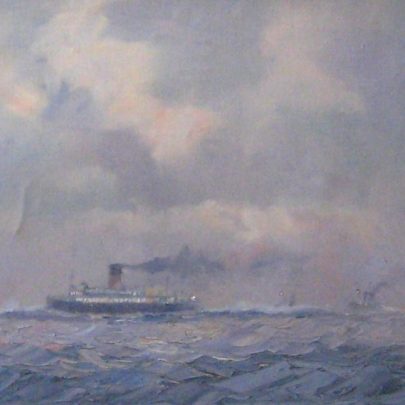 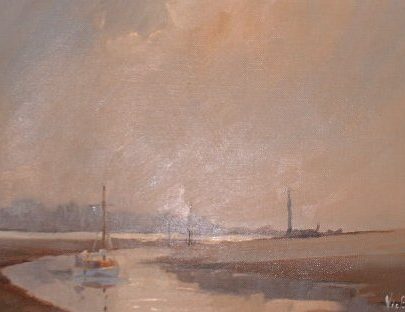 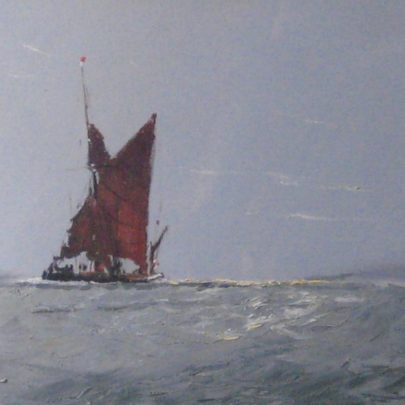 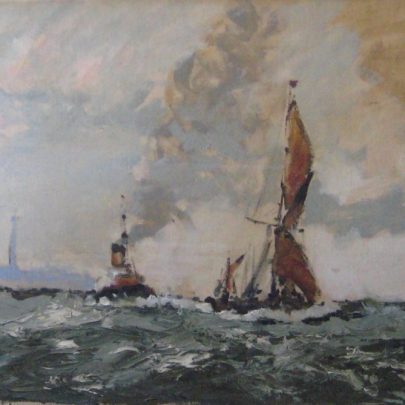 This painting was a demonstration painting he did for the Southampton Art Society in about an hour, whilst giving an enthralling running commentary on his methods and answering questions from the audience.
©Peter Morice 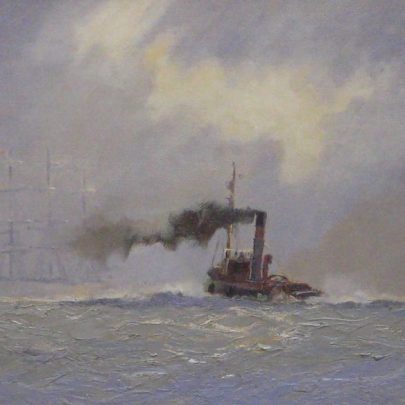 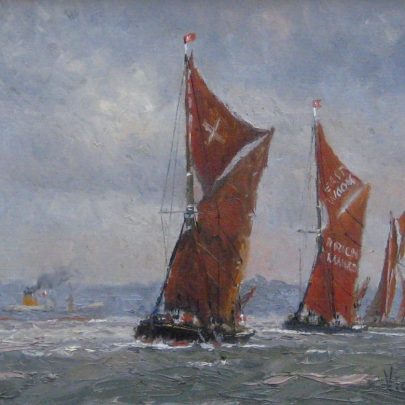