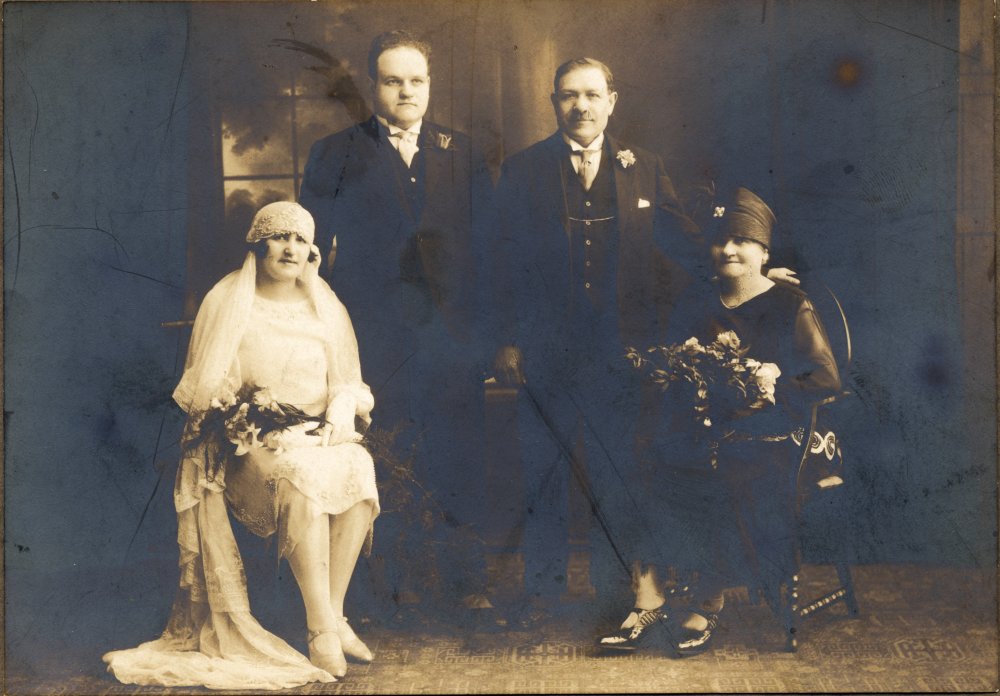 Simon & Idah’s Wedding. With his parents Myer and Sarah

Tower Radio was founded in 1932 by Simon Shoffren and today it is run by the third generation of the family Bernard Litman. Simon was born in London in 1899 of Russian parents Myer and Sarah. The extended Sophrin family, (their Russian name) left Russia during the period of mass exodus of the Jews from Russia at the end of the 19th Century. Sarah was pregnant with Simon at the time so was born after their arrival in the UK.

The families were dispersed around the country and it was in 1927 in Glasgow that Simon married his wife Idah. Idah was born in Latvia but was issued with a Norwegian passport during an amnesty after the family arrived in that country. Simon’s father Myer died a few months after Simon’s wedding.

Simon was a Radio Mechanic who had three shops in Glasgow but was badly hit during the Depression in the thirties. Simon moved his wife, mother and daughter south to Canvey in 1932 to open a store. The family stayed with his Aunt Sonia. Sonia was born in Russia in 1894 and married to Leonid Galperin. Sonia had arrived on Canvey in 1927 and has her own history on the Island which can be read here.

The business was set up in 1932, originally being called Tower Radio Stores, at 43 High Street. The shops at 41 and 39 were added later. The original shop was built on stilts and the name ‘Tower’ comes from a wooden Tower that was in the grounds behind the shop. It was already there when the family took it over but we are not sure what it was used for. Is this possibly an old water pump?  The family lived in the accommodation above the shop. 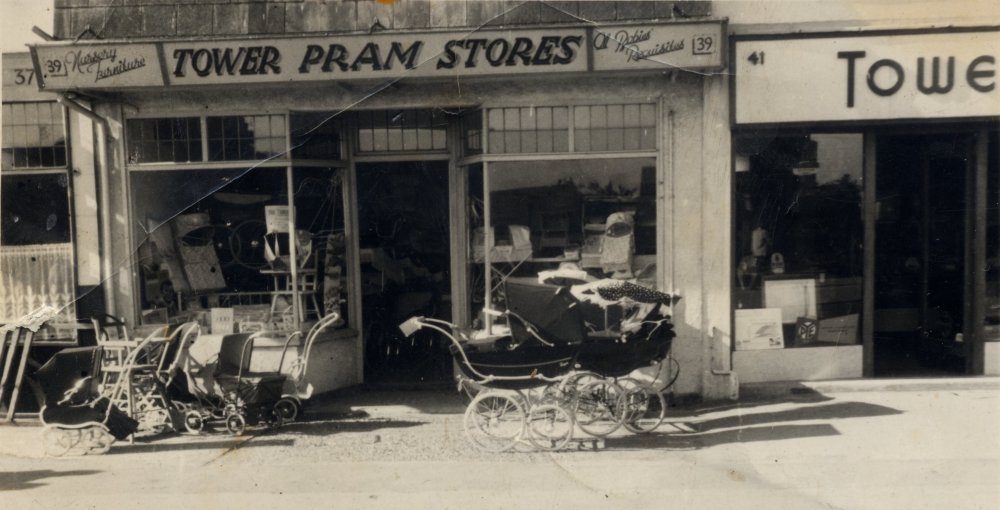 Times were hard during the war so the family looked for ways to earn extra money. Simon drove a Taxi on the Island, and as well as the radio shop they also hired out Radio sets, prams and invalid chairs to visitors. They hired out radios to the Armed Forces for half a crown a week. (about 13p in today’s money) A new branch of the business was started where they sold prams and other baby equipment and one of the shops at the Larup Road site was used just for this purpose and called Tower Pram Stores.

The Tower Radio shop now in the High Street on the corner of Larup Avenue was rebuilt on the site about 1979. This time the building has just the one floor. (See the picture in the gallery below)

Other members of the extended family lived nearby in the San Remo bungalows across the High Street from the shops. Sonia Gilperin was living in No. 1 San Remo. Just after the war, Barnett and Lily Shoffren, cousins of Simon were living at No.2 San Remo where their daughter Pamela was born in 1946. 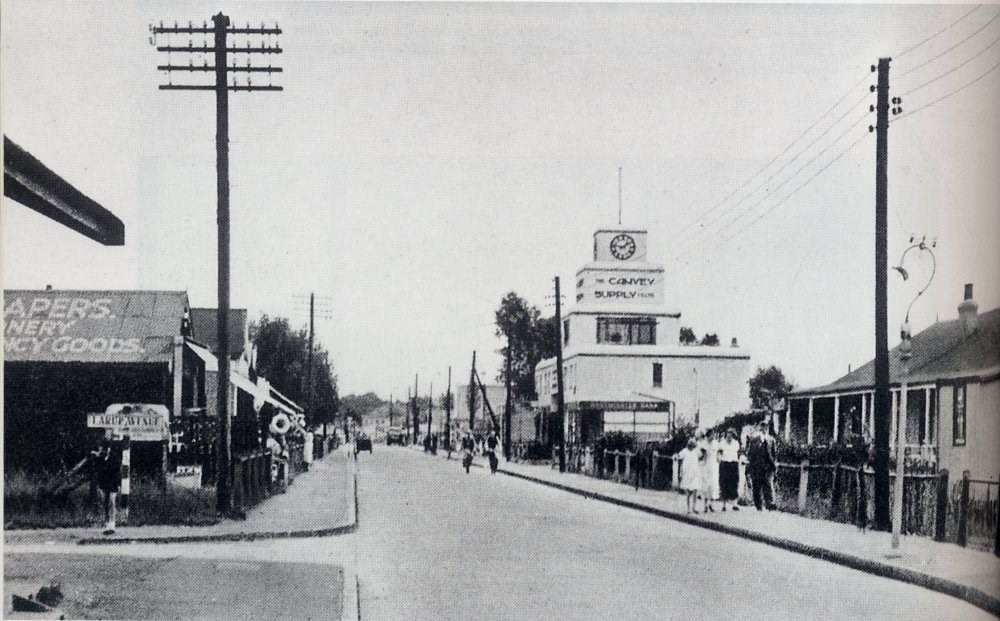 1930’s View from outside the shop in the High Street. The shop is on the left on the corner of Larup Avenue. Across the road in the distance is Canvey Supply and closer on the right are the San Remo Bungalows. See picture below of a similar scene 2010

Simon died in 1948 and the business was run by his wife Idah and daughter Miriam. Miriam married a few years later to Michel Litman. Michel studied hard to learn the business and joined Miriam and her mother.

Miriam remembers the floods of 1953. They woke to the sound of the siren. Miriam spoke to the telephone operator to find out what was happening and was told ‘The back wall has gone’.  Water was fast coming up Larup Avenue to the steps of the shop. The shop however was not flooded and became a place of refuge for people arriving by boat from the flooded areas. The family used their taxis to evacuated islanders to King Johns School in Benfleet and they were at the school when the Queen and Princess Margaret made their visit. 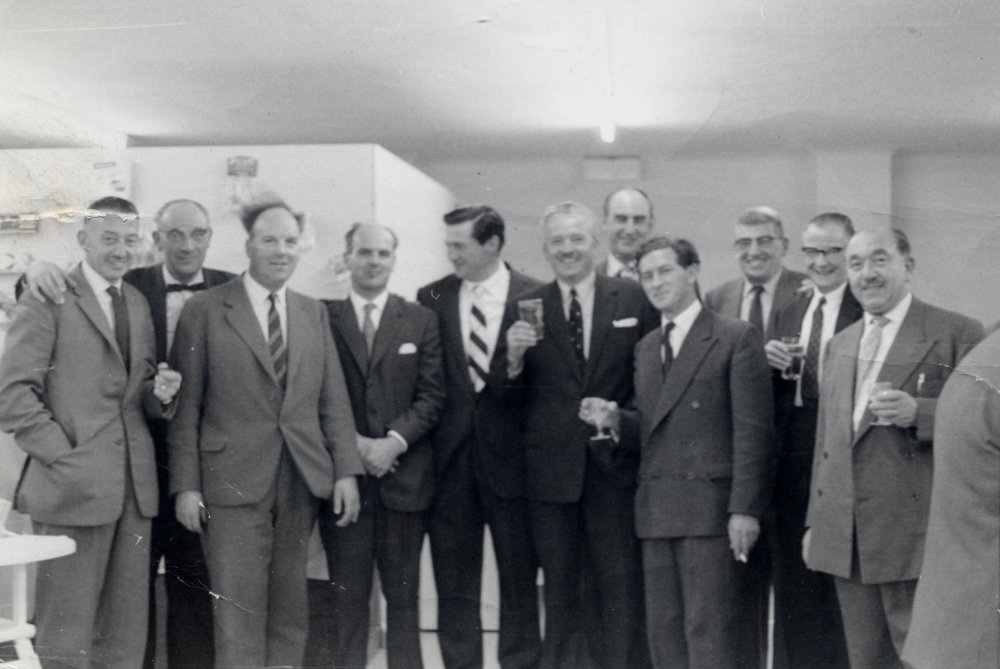 The Opening of the store in Furtherwick Road 1979

Their shop in Furtherwick Road was opened in 1961. The name was then Tower Radio and was a Radio, TV and prams business with the prams occupying the upstairs. The upstairs had a mezzanine floor and only extended across part of the building as can be seen in the pictures below. We are very fortunate to have some of the pictures of the shop with others from the opening and other functions.

Miriam and Michel’s son Bernard first worked for the business in c1973, learning the business from the floor up. Michel died in 1988 and although Miriam has now semi-retired she is still quite active in the company. Bernard now runs the company which has spread far beyond Canvey Island. As well as the two shops on Canvey, they have stores in Hadleigh, Rayleigh and Southend as well as further afield. 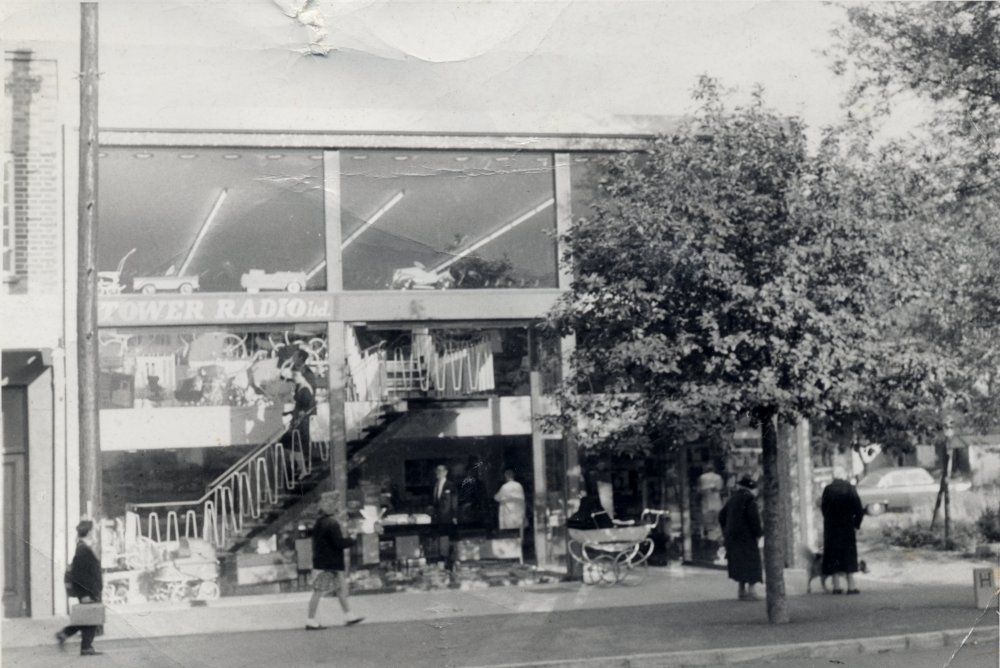 Many thanks to Miriam Litman and Pamela Winborne for all their help. 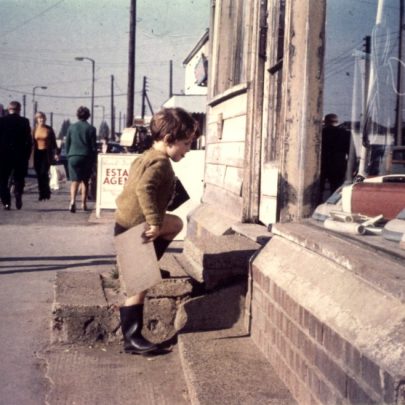 c1972; 5 year old Paul Stacey seems fascinated by the Hoover in Tower Radio's window. Could be pricing it up as a future antique.
Jenny Stacey 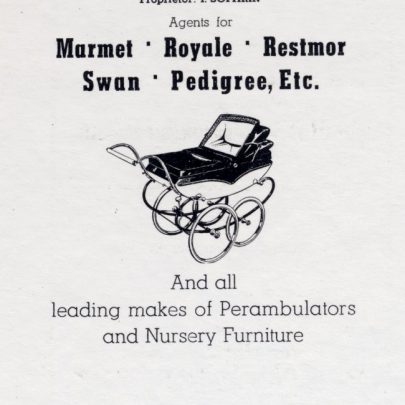 An early advert for the pram shop 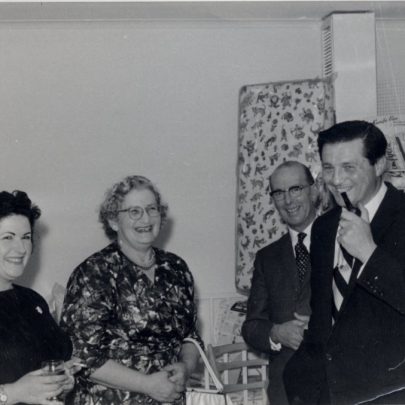 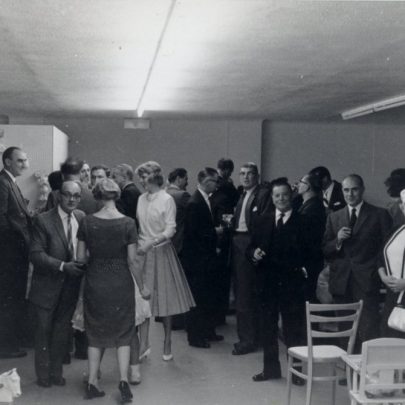 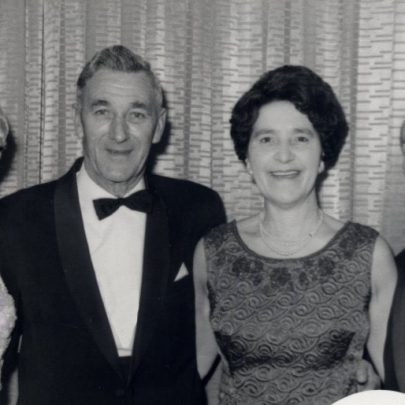 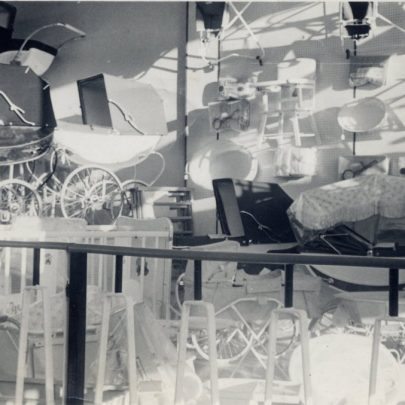 The Prams upstairs in the Furtherwick shop
Miriam Litman 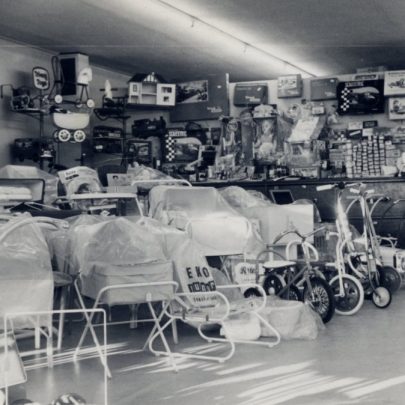 Prams and toys in the furtherwick shop
Miriam Litman 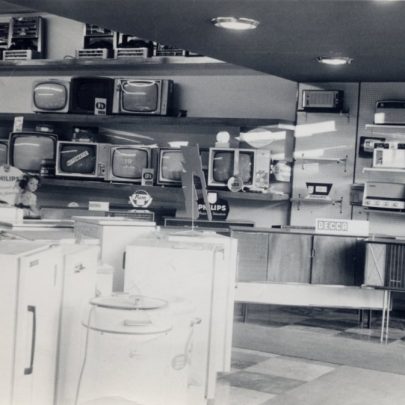 The main electrical department in the Furtherwick shop
Miriam Litman 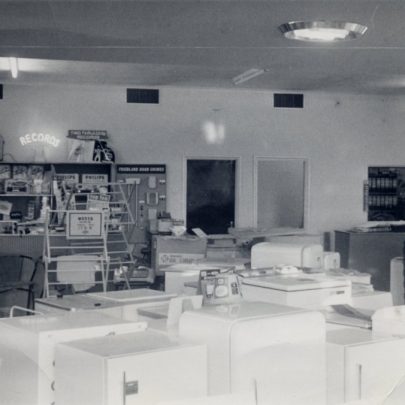 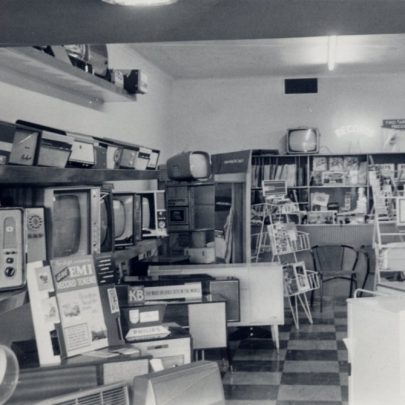 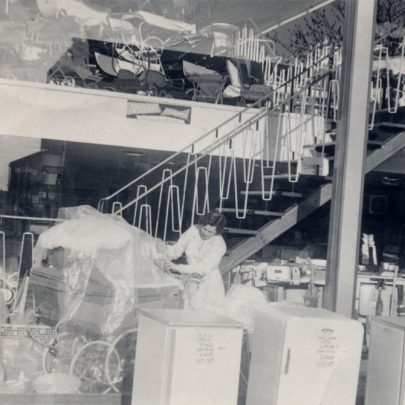 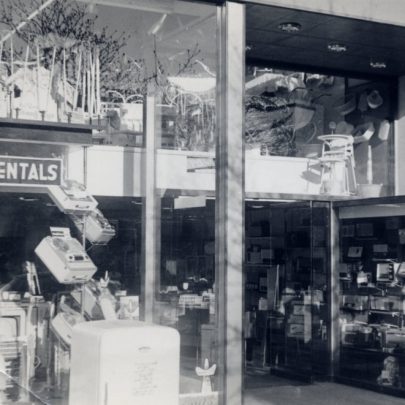 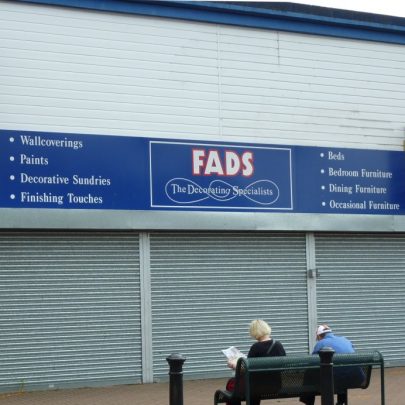 Tower Radio Furtherwick Road site as it is today 2010. The last occupants were Fads.
Janet Penn 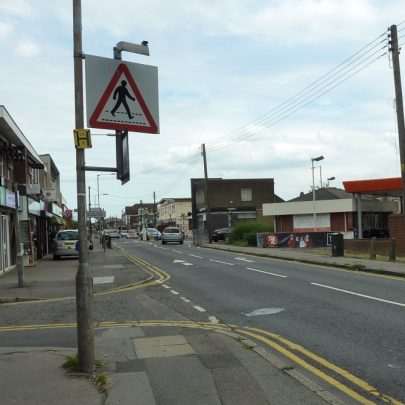 This is as near as I could get to the High Street picture taken in the 1930's. Canvey Supply in the middle, Sainsbury's garage is where the San Remo Bungalows were and Larup Avenue plus Tower Radio or on the far left.
Janet Penn 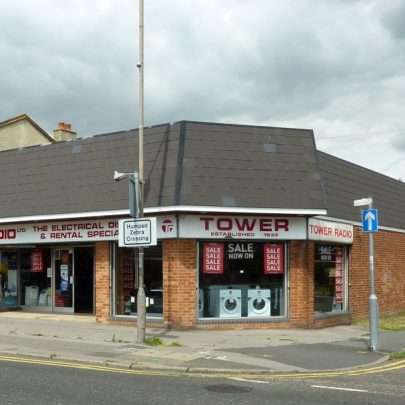 Tower Radio shop at the junction of High Street and Larup Road, built on the site of the original buildings
Janet Penn 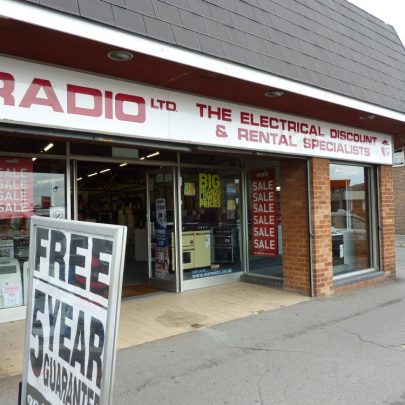